The Ventures, The 60s Surf Band, Still Big in Japan! 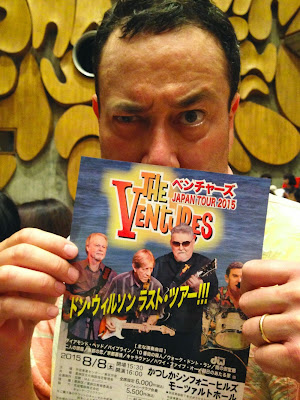 (That's me holding the poster for the "Ventures Final Show in Japan." I did drink with Don Wilson - the guy who is second from right - the one that looks like Rock N Roll Santa Claus. How could I forget that face? Nice guy.)

This is a short post about some guys who really inspire me. You know them as "The Ventures." They were huge in the sixties all over the western world.
They are still big in Japan...

Here's what Wikipedia says about the Ventures:

"The Ventures are an American instrumental rock band formed in 1958 in Tacoma, Washington. Founded by Don Wilson and Bob Bogle, the group in its various incarnations has had an enduring impact on the development of music worldwide. With over 100 million records sold, the group is the best-selling instrumental band of all time. In 2008, the Ventures were inducted into the Rock and Roll Hall of Fame. Their instrumental virtuosity, experimentation with guitar effects, and unique sound laid the groundwork for innumerable groups, earning them the moniker "The Band that Launched a Thousand Bands".

While their popularity in the United States waned in the 1970s, the group remains revered in Japan, where they tour regularly to this day. "

It's true. The Ventures are still big in Japan.

May I brag? I have drank with Don Wilson at a rip-off bar in Roppongi before...  I think that must have been in about 1988 or 1989. I have a photo around here someplace... If I can find it, I'll put it into this blogpost. Don was a nice guy and the boss of the bar was kissing his ass the entire time I was there and Don put me on the guest list for the show... (So, how could I forget, no matter how drunk I was? And I mean, how many people look like Burl Ives or a a Surfer Santa Claus?)

And don't really remember too much from that night excepting that Don was a nice guy, soft spoken, and I drank too much.

We drank Dom Perignon and it was outrageously expensive (I remember that). And I didn't have to pay anything, they paid. I was blown away that they would pay for some shitty DJ in Japan's drinks....

I vaguely remember the bar's name (I think it was "Chalace" or "Chantay" or something like that) and I have been by there in the last few years but it is now gone.

I think it was like ¥90,000 (almost a thousand US dollars) for a few bottles of Dom Perignon and some snacks. What a rip off! Thank God my girlfriend and I didn't have to pay!

Anyway, like it says, the Ventures are still big (sort of) in Japan to this day. So big that they are actually having a "Final Show." Well, what the hell? I guess so, I thought all the original members were dead?

Anyway, a Final Live, they have!

It's kind of like my Punk Band when I was a youngster: every show we played was our "Final Show" (or "Last Final" or "Totally Final" or "Really, We're Not Joking This Time, Final" or "Seriously, the Final Final.")

But this just goes to show that if you have a brand and a name and an image, you gotta stick with it and live the dream.

And that's not to mention what they get selling merchandise and a bunch of money from sponsors.

Is that cool or what?

So, well, the point is that:

1) Ventures are still big in Japan.

2) The Ventures can still come here and get paid to play and have fun.

3) They must all be in their late 60s or early 70s yet they can still tour the world and be treated like Rock Gods in Japan.

4) They probably still get to go out drinking in Japan and spend $1000 a night yet some rich Japanese person picks up the tab.

Scoff all you want... But you won't find me disrespecting these people.

They rock! They have lived the true "Rock and Roll Dream."

NOTE: Holy Shit! I just found out that Don Wilson was born in Feb. 1933! That makes him 82 years old as of the writing of this article! Wow! What a wonderful life! And he is on his final tour of Japan! You rock Don!!!! You are a hero!

The Kanda Matsuri is one of the three great Shinto festivals of Japan, along with Gion Matsuri in Kyoto and Tenjin Matsuri in Osaka! Kanda Shrine was founded in 730 AD. 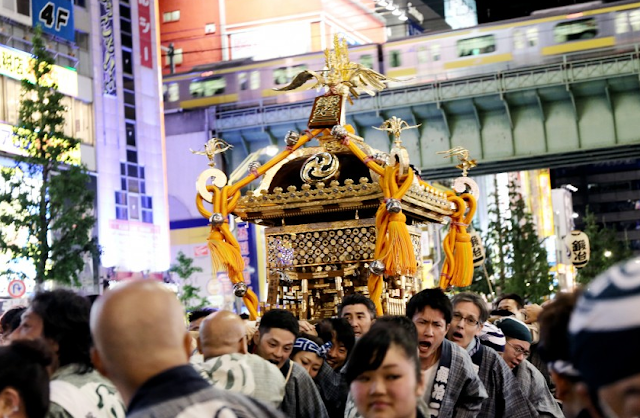 
Did you know that the Japanese mint released 300,000 new ¥100 coins into circulation to commemorate the 50th anniversary of the Shinkansen Bullet Trains the other day? No? Well, it doesn't seem like most people knew about it, either.

My wife's mom just came over and gave a set of the coins to my son. That's how I found out about it

Here's what the Japanese mint says about these coins from their webpage: (http://www.mint.go.jp/buy-eng/international-eng/eng_shinkansen_coin_program_index.html)

"A bullet train Shinkansen, which was developed for the 1964 Tokyo Olympic Games, has been widely known for half a century, domestically as an important infrastructure supporting the lives of the Japanese people, and internationally as one of the symbols for Japan’s high technology. On October 1st, 2014, the Shinkansen marked the 50th anniversary of its opening. We release a series of commemorative coins featuring Shinkansen to commemorate of this anniversary between 2014 and 2016. It will include one 1,000 Yen silver proof coin and nine 100 Yen clad coins."

Since the mint only released 300,000 of these, I guess that's why not too many people had heard about it; the mint might have intentionally tried not to advertise too much because people go crazy over stuff like this.

I know I would have. I collected coins and stamps (and baseball cards, comic books, etc.) when I was a kid.

As it was, according to my wife and mother-in-law, people were lining up at banks and post offices around the nation on the day of release to try to get a set. I'll bet you half a donut that the people who did line up - and were lucky enough to be able to get a set - did the "Apple Store" thing; they must have lined up from the night before. And, since each bank and post office only received a few sets, the sets were all gone within the first one minute on release date.

There's no way I would ever do that for computer stuff... For commemorate coins for my kid? Or for my own collection? OK. I suppose so.

It seems that there were lots of disappointed people who tried to get a set but couldn't.

These sets were virtually impossible to get if you were in Tokyo, but I hear they were a bit easier to obtain if you lived out in the country...

My kid seems to like them. I reckon the little boy in all men would like them too!