I have organized another free concert for people to enjoy. 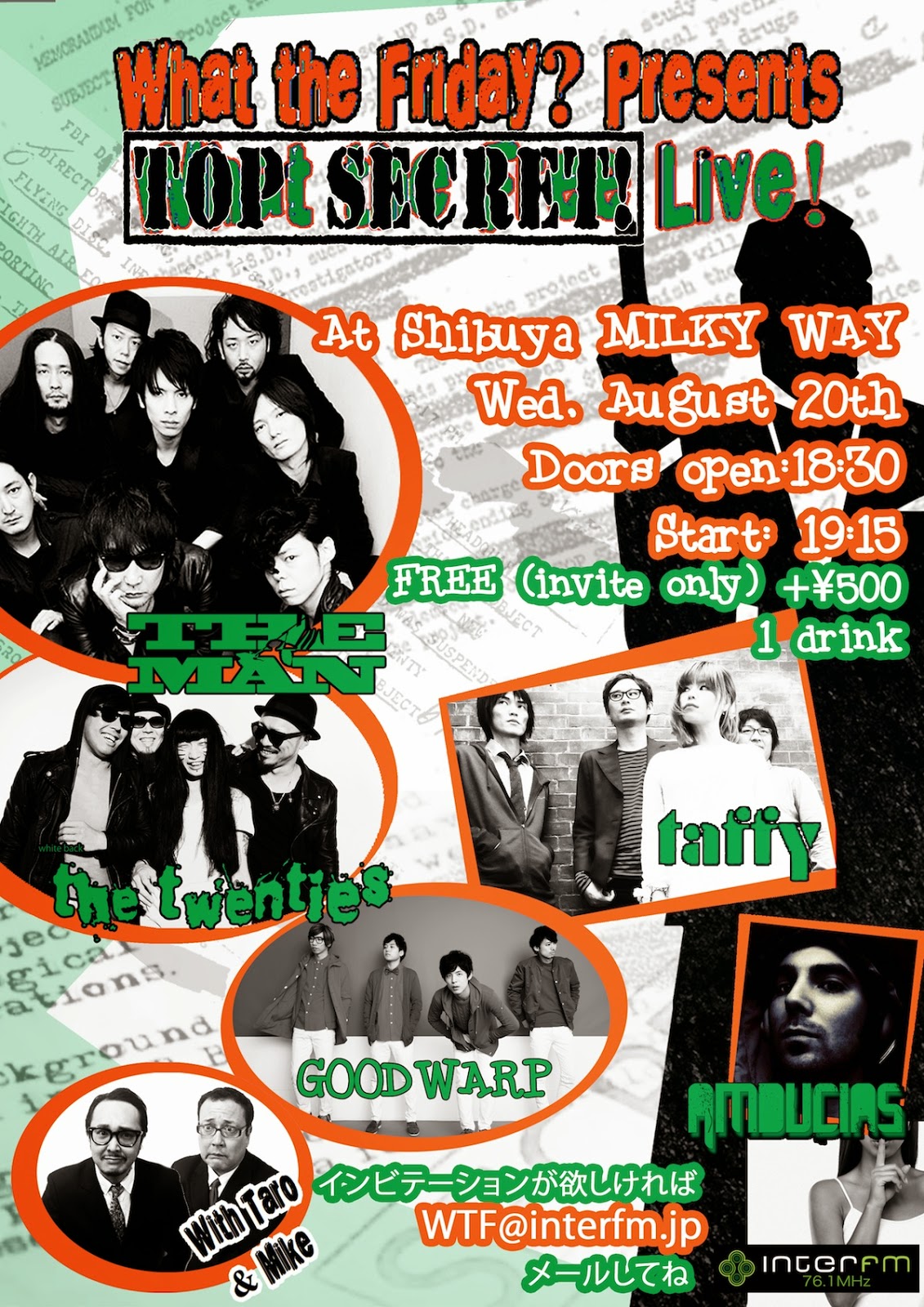 I think these big summer festivals whereby people spend $500 to $1000 (more?) to go to a festival to see bands with crappy sound, bad food, and stand in long lines to go to the toilet are way over priced.

On August 20, 2014, I have set up another killer show that is "invitation only" limited to 250 guests. The show features "The Man";  Also Japanese band, "Taffy" (who garnered 8 out of 10 stars from Britian's NME Magazine (an new band getting 8 out of 10 stars? Never heard of it!)  "The Twenties" and "Good Warp."  Also DJ'ing that night is the eclectic and infectious sound of "Amducias."

I think it will be one of the best and most memorable shows of summer 2014.

The show is by invitation only and drinks are a mere ¥500 (at the door) So, I hope to see you there!

It's going to be one of the most happening parties in Tokyo summer of 2014. 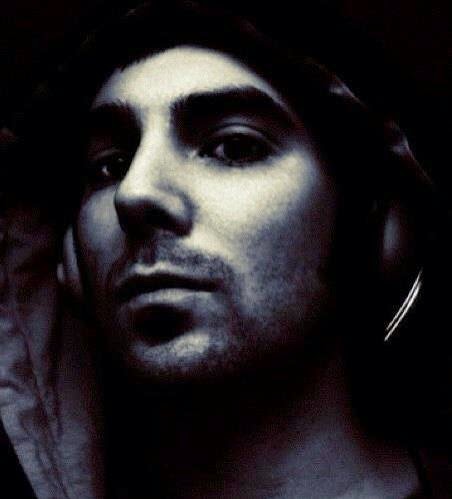 Being an Idiot AND Being in the Wrong Place at the Wrong Time? Bad Combination!

I have had the unfortunate (?) experience whereby I was an idiot, and in the wrong place at the wrong time, at the same time, but still somehow, I got lucky and escaped.

My friend works at some sort of automotive business. Here is what he wrote:

So once upon a time, I get to take cars home just randomly under the pretense of evaluation. Sometimes I actually need the cars for work and other times I just want to drive cool shit like the Alfa Romeo. There are others just like me at the company who have the same privileges.

So, one day, this dumbfuck intern at the company thought it would be a good idea to take home a cop car (this is where the "idiot" part comes in - Mike).

He thought it would be smart to turn on the lights on a freeway and yell at some guy, "Pull over IMMEDIATELY!" and the guy actually did. Problem is a real cop witnessed this and was quickly on the scene. Well, the intern and all three of his friends in the car got arrested. So they all got fired from the company (of course) and now our organization is blacklisted from (Name of Major US Automobile manufacturer here) recruiting for a while.

The kicker is, the parents of the kids who weren't driving and riding in the passenger seats are now suing both the company and the driver of the car for defamation since they weren't driving nor did they tell him to turn on the lights (You know, it's a "He said, she said, situation.") and the kids who were passengers were basically blacklisted (for life?) from auto since HR talks to each other. To make the situation even more of a clusterfuck, the driver's parents are countersuing, and the company is countersuing them all.

Here's the thing; I was pretty close with those four people and was considering going with them that very night since they said they were going to a house party and thought it would be cool to take a police car there. The only reason I didn't go along was because I had to stay in late at the office because I had a presentation due the next day so I'm luckier than the guy who didn't get on MH370.

Really. Holy Shit. God smiles on you! I've had many close calls like that in my life...

It is hilarious in retrospect. But when I first heard about what had transpired, I was shitting bricks at how close that was.

Forty years ago, when I was in High School, my friends and I would do the typical stupid things that high schools kids did back in those days. One of the dumbest things we did with regularity was to drink and drive all the time; it was our weekend idiot ritual. We took turns driving our cars. John (not his real name) had a small truck. Rick (not his real name) had a small Japanese car. Me, Mike (Yes, my real name) had a German sports car. I am amazed that I was never stopped even once by the police (but we did live in what was a small town at the time with many rural roads.)

The small truck that John had that could only ride two in the cab up front and the third had to ride in the back on the bed of the truck (back in the days when that, as well as many other things, wasn't illegal). The three of us would drink a fifth of JD straight and be so drunk we couldn't see the divider lines in the road without covering one eye. (If we didn't drive one handed and cover one eye with our other hand, we'd see the divider lines on the road doubled!)....

We did that insanity months (idiot youth!)

One night, as usual, my friends called me and asked me to go drinking with them. I had never refused before, but that night, for some reason, I did. I stayed home that night.. I'd find out the next day that they rolled the truck that evening.

God! How lucky I was. If I had gone with those two that night, then one of us, either me or Rick would have died. Who ever would have been riding in the back would have surely died as the truck took a sharp turn and rolled over a few times on a downhill asphalt curve...

Since I didn't go, those two could ride relatively safely in the cab. The two of them only suffered concussions and a few broken bones (and a completely totaled truck).... And, of course, being arrested for DUI.

I was extremely fortunate. To this day, I often wonder why I didn't go that night. I've dodged that kind of bullet many times...

Consider yourself fortunate, my friend... It is a good omen for your future... Always get in tune with your inner feelings and when you feel something "isn't right" then don't do it. 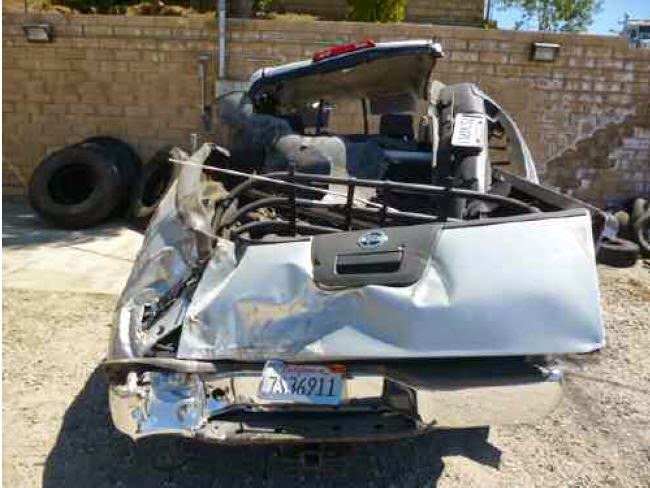 This isn't John's truck. John's truck was much worse than this. John's truck had the cabin flattened like a pancake. It's a miracle those two guys didn't break their necks.

I concluded my note to my young friend:

"Some people just wind up doing stupid things and being in the wrong place at the wrong time.... You weren't one of them this time.

Do your best not to be one of them the next time also."

NOTES: Folks, never drink and drive and always drive defensively; slow down. Speeding to get where you want to go is only going to save you a few minutes (that won't matter anyway) and it greatly increases your chances of a life changing accident.

I have been lucky all my life even when I did stupid things. Today? When I drive, I never speed and always stop at stop signs and traffic lights and haven't gotten stopped by police for any traffic violations in 27 years! So anytime I see the cops with roadside blocks checking for seat belts or traffic violations, I laugh as, since I do not break the law, they can't stop me; It's my own little revolution against the taxation system.

To get slightly off the subject, and to read how these traffic violations and the following fines are actually a form of taxation, read: Driver's Licenses Have Zero to Do With Safe Driving: They Are a Back-door Tax!
at August 11, 2014 4 comments: