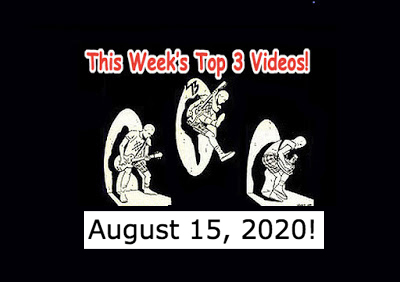 BIG NEWS! Please check my new webpage! You can check it out at www.MikeRogersShow.com! There you can find all sorts of information about the show AND my new Youtube page chock full of videos! Please check it out! www.MikeRogersShow.com
First up today is a Mike Rogers Show EXCLUSIVE! It's from my friend Geets Romo (Hollywood playboy, band promoter and all around nice guy!) Their bio says: "Tiger Bomb, is an all female garage-pop & rock outfit from Portland, Maine. Featuring Chris Horne from The Brood and Lynda Mandolyn from Fabulous Disaster."
They have excellent reviews too: "Dug this record on the very first listen. Nothin' like a garage band made up of ass kickin' chicks utilizing harmonies and hooks. I can tell there are lotsa spins of this record for me." Palmyra Delran, (Radio host on Little Steven's Underground Garage)
Here is their Facebook: https://www.facebook.com/tigerbombband
3) Tiger Bomb - Constellations (EXCLUSIVE!)
At #2 this week is a band I have been playing alot on my other radio show, The Color Red Radio Show With Mike Rogers." It's on in 11 nations and on 17 stations the world over! Check it out!
The mysterious band is called "Death by Dub" their short bio says: "Original Instrumental Dub Music" and that's what they are! These guys are fab!
Here is their Facebook page: https://www.facebook.com/DeathbyDubbb
2) Death by Dub - "Sinkhole"
https://www.youtube.com/watch?v=pIX9VUEUmY4&ab_channel=ColorRed
At #1 today are the Rews from Ireland back at us with a great new song. The Rews bio says: "Rews is the high energy alt-rock/pop band lead by charismatic N. Irish musician and songwriter Shauna Tohill."
Go check out the Rews Facebook: https://www.facebook.com/wearerewsmusic

SPOTLIGHT ARTIST! Today's Spotlight Artist is from Japan. Yeah, that's what their bio says: Japan. I guess these guys were all friends from high school and got together to make their band in 2017. They've won some contests and now they are totally happening.
Like most young people in Japan, they don't do Facebook, but they do Twitter: https://twitter.com/sakuranzensen/
and here is their Youtube page:
https://www.youtube.com/channel/UCbniqEqSyRAzFoEPptO2bqQ
SPOTLIGHT ARTIST! Sakuran Zensen - Taxi Man:

Oh, and he likes to write about himself in the third person! Past radio shows can be found on Mixcloud: https://www.mixcloud.com/mikeintokyorogers/