The year 2018 is almost over. It's been a wonderful year and full of surprises. Here are this year's Top 50 songs (videos where available). These are all songs from Oct. of 2017 to today! 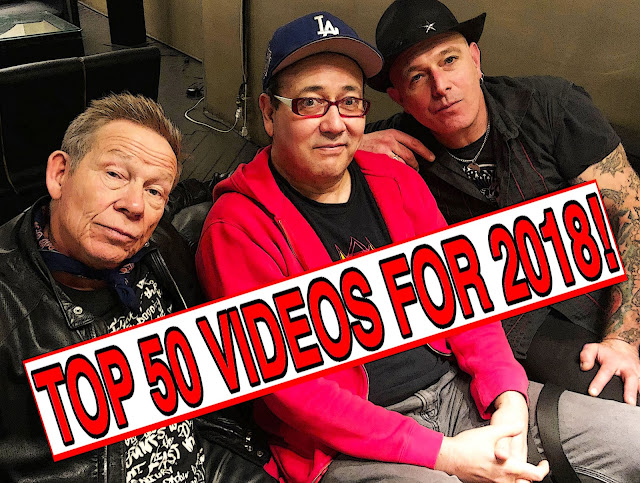 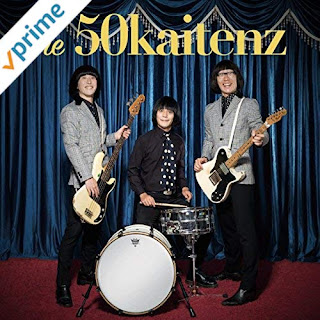 #2) Miss World - Put Me in a Movie: https://www.youtube.com/watch?v=1RpuxPcp_A8
Hey! She just moved to Los Angeles and had a meeting with Rodney Bingenheimer!

#3) The Professionals - Rewind: https://www.youtube.com/watch?v=h2lR5Y1Ycl8
Paul Cook (former Sex Pistols) is back with a world tour with his new unit and it's fab!

#5) Starbenders - While I Was Sleeping:
https://www.youtube.com/watch?v=MbO4UAZolxQ
Hot new act from Atlanta, Georgia. Achieved a Japanese release and toured Japan in 2018! World's first on air was my show!

#7) Daisy House – Let’s Do It Again: https://www.youtube.com/watch?v=7CSLUCvhqMw
Duo from Hollywood had several tracks on our countdown this year!

#9) Elmo Weber – Bali Hai: Immigrant Song https://www.youtube.com/watch?v=r0Y1pIAVMAw
Awesome track that is probably the most popular of the new radio show!


#10) Pen Friend Club - Kimi to Boku no Melody: https://amzn.to/2RG0hI6
This song has no video. Here's a direct link to listen online to Amazon Japan. Fantastic track! 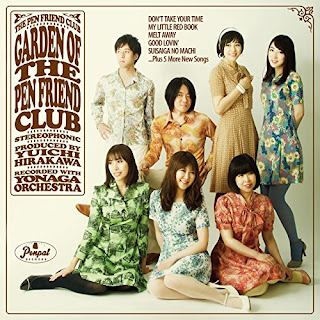 
#15) IDestroy – Lemons: https://www.youtube.com/watch?v=MNzP30FPPPs
IDestroy really have delivered the goods with their second EP, an explosion of riotous energy that makes you want to get up and throw something, or possibly yourself, across the room." - Kerrang! Magazine

#18) THE MOST – Gatecrashers! https://www.youtube.com/watch?v=lzMJFedZDwkThe Most is a Beat band from Umeå, Sweden.

#19) VOIID – Silly Girl: https://www.youtube.com/watch?v=RmwfZgHCG3k
a four piece of hellish girl-shriek guaranteed to make your face melt and your boyfriend cry.

Well that's the Top 25! But there's just as many cool songs on the rest of the Top 50 from next week! Be here! 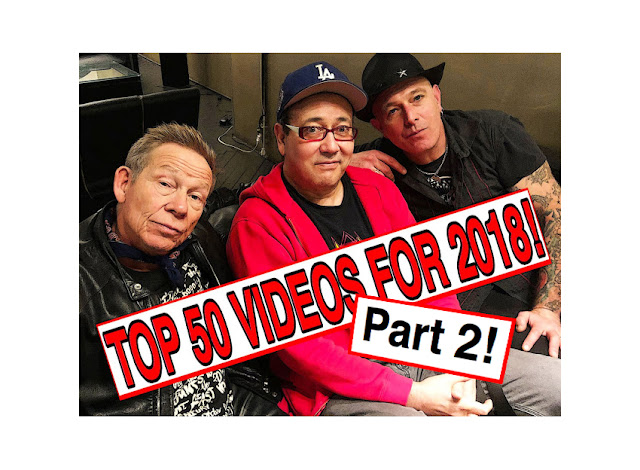 #26) THE PATS PATS -”AnoLuck”: https://www.youtube.com/watch?v=qib51uSm85c
The Pats Pats are Akiko and Midori and they are fab!


#27) Upsahl – Kiss Me Now: https://www.youtube.com/watch?v=c_E7f3F0Kaw
A confident, doe-eyed paean to the anticipation of a first kiss from a talented artist just months out of high school.

#31) The Reckless Drifters - "Baby, We're Really in Love"
https://www.youtube.com/watch?v=6MzxIbILDb8&list=OLAK5uy_n7YqSR91_hGtVaeVWCM1bzZUcRiolORCo
From L.A. Lots of famous people in this band.

#34) Voiid – Cheap Wine: https://www.youtube.com/watch?v=jOwqThjpfsU
A four piece of hellish girl-shriek guaranteed to make your face melt and your boyfriend cry!

#35) Les Stores – Non, non, non, non: https://www.youtube.com/watch?v=taMN4wf0JrE
It’s a solo project by Frédéric Martinez. With «les Stores» he plays all instruments. All music is written, recorded and produced in his home studio.

#36) Pip Blom – Babies Are A Lie https://www.youtube.com/watch?v=xusKQJX12Z4
We are Pip Blom. We are from Amsterdam.

#37) The Routes - Driving Round in Circles: https://www.youtube.com/watch?v=CH6WfVZ4tCE
No gimmick, no bullshit... Stomp'n'Grind Garage Rock, Garage Punk, Surf, Rhythm and Blues, Psych... Whatever the hell WE want to hear!

#40) FAZERDAZE - Take it slow: https://www.youtube.com/watch?v=0cjpAz5iUnA
Best thing out of New Zealand since the Jean-Paul Satre experience?

#41) Kate Sikora - The Hundreds: https://www.youtube.com/watch?v=MhDWSh5g87s
Like a ping pong ball, native New Jersian, Kate Sikora, has been crossing the globe for the past 7 years charming American and Japanese audiences with her indie-folk-pop tunes.

#44) Silke Berlinn & The Addictions - Ball & Chain: https://www.youtube.com/watch?v=pdFPYdZ2T2Q
Silke Berlinn, a proto-punk" vocalist known for her broad-ranging vocal style, has been called “the Janis Joplin of punk rock” and has been compared with Ronnie Spector of the Ronettes and Tina Turner.

#46) King Cornelius & the Silverbacks - I Am Great Ape! https://www.youtube.com/watch?v=lIzTLqrsVAU
The Silverbacks captured King Cornelius in the hope of making him serve them. Discovering that he was an ape of enormous entertainment potential, they made him their leader and formed a musical combo.

#47) B-Girls - Down at the Beach: https://www.youtube.com/watch?v=F-u5Vmg_VDI
The 'B' Girls are a Canadian all girl rock'n roll band that formed in 1976 and recorded on Bomp Records. They moved to NYC in 1977 and toured w the Clash. Their final radio appearance in Japan was on my show!


#48) Marc Platt: "Woman Of The World": https://www.youtube.com/watch?v=PdT3Bq9RECY
Marc Platt has been a singer-songwriter playing in and around Los Angeles since 1980.


Years ago (like 30 ~  35 years ago) there were VERY few foreigners in Japan.... And the few that were here, couldn't speak Japanese all that well. Oh sure, there were a few who could speak Japanese, but they were on TV!

Back in those days, I'd take my wife or girlfriend to restaurants. Being a pig-headed foreigner I had taken it upon myself to teach the Japanese nation that some of us foreigners could speak Japanese! There were a few other foreigners back in the eighties who had the same mission... 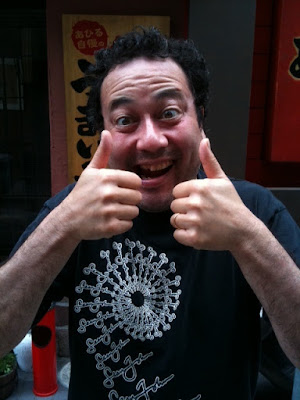 I'd order in Japanese. Something simple like, "I'll have two beers please!" and the waitresses wouldn't look at me. REALLY. It used to drive me crazy. I'd say it very clearly and slowly so they could understand, but, they'd give me a sideways glance, I'd say, "Two beers, please!" and the waitress would slowly turn her head to my wife or girlfriend (it's complicated, OK?) as if to say, "What did he say?"

You, see, there weren't any foreigners here. And if there were, they didn't speak any Japanese. So the waiters and waitresses didn't know what to do! They had never seen a foreigner in "real life" so they didn't expect that you could speak even basic  Japanese. Really.

I'd order and they would look startled at me and then look at my wife or girlfriend like, "What the heck did he say? I don't speak English!" This would make me mad.

I mean, I even asked my partner if my pronunciation was good and they'd tell me it was fine!

I insisted that when we went to restaurants, that my partner say nothing. Or say, "What are you looking at me for? He's the one talking to you?"

But I digress... I'd say something like, "Wait! Stop! Can you see me? Can you see me? Am I here?...." My arms flailing away at my face and body, touching myself to make sure I was actually "there."

Then my girlfriend would say something like, "Yes, I can see you and hear you" (I trained them well).

Then I'd act and say something like "What a relief! I thought I was invisible again!" Then I'd order again.....

The waitresses usually got used to it after 2 or 3 times.

Anyway, that's the way it used to be back in the day! I'll bet it's still that way in the countryside! 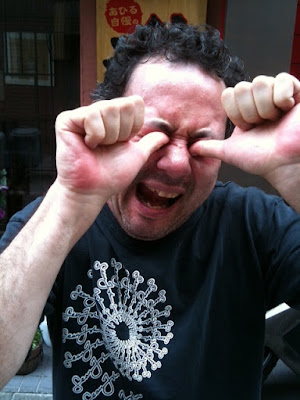 ...So I can gouge out my freaking eyes!

The jokes on me, though... You see, The Japanese don't throw fits in public, so when I'd be yelling, "Can you see me? Can you see me?" the waitresses would probably have been be thinking, "Wow! There was a foreigner today who was asking me if I could see them! It was so weird!"