The Maker of "The Cove" Gets Deported!


This is a conversation showing how immature and illogical people can be. A "friend" of mine was complaining that the producer and host of "The Cove" (Ric O’Barry) was deported from Japan. Here is the conversation:
ME: "Misha (not real name), Japan is fucked up. But I have a question for you, as I once asked O'Barry (the man who was deported) to which he refused to answer: "If the real purpose of "the Cove" was to alert and enlighten people as you say (the Japanese especially) and stop the Dolphin slaughter - instead of making money - then why don't you make the video for free available on Youtube?" He has refused to answer.
I don't understand. If I were sincere, then I would make the movie for free available on Youtube.... And I HAVE made many productions for free and they are freely available on Youtube. This seems like hypocrisy to me.
Oh, and the idea that giving things away for free doesn't make money is disproven by Google.... Which gives away everything for free....
I am ambivalent about the dolphin kills, but think these people (like O’Barry) are opportunists and full of shit; they are purely profit motivated.
PS: Japan, Norway and Iceland still kill 1000s of these creatures a year. The Cove has done nothing to stop it. If the supposed purpose was to "Inform the Japanese people so that they rise up and stop it" (O'Barry's words, not mine) then he'd make the film public domain and available to everyone for free... But he doesn't.... Why?... Everything this guy does is all a publicity stunt to make money. The day they make the video free to everyone (after all the survival of the entire world is at stake, right?) I will recant and apologize... That won't be within the next 25 years. He is a profit-minded movie producer cashing in on emotions to pad his wallet."
MISHA: "I suppose documentaries like "The Cove" are expensive to make. And free speech applies to all.
ME: "That's not my point at all. He said, "I made the film so that Japanese people rise up and stop the slaughter" But it only shows in 3 theaters in the entire country????Get real.
130,000,000 people? 3 theaters...Bullshit."
MISHA: "You're being rude."
ME: "No. I am being factual. You are being tricked by a profit motive by unscrupulous people.
Pandora's Promise is free. Anti-nuclear movie. It costs LOTS more than the Cove did: https://www.youtube.com/user/PandorasPromiseMovie
Pandora's Promise
See it in theaters June 2013! Like on Facebook athttps://www.facebook.com/PandorasPromise Follow on Twitter athttps://twitter.com/PandorasPromise Impact Pa...
youtube.com
Anti-nuclear...Don't trust these fricking Hollywood people for 1 second.
MISHA: "Settle it with O'Barry, my opinion is that he shouldn't have been deported, because it's against the principle of free speech."
ME: "This has nothing to do with free speech, does it? The law is usually 95% clear. He lied on his customs and immigration documents and was never allowed entry into Japan in the first place.
"US animal rights activist Ric O'Barry, detained for nearly three weeks after being denied entry to Japan, has been deported from the country, his supporters said Friday."
MISHA: "Yes, I read it. You're being patronizing."
ME: "No. He was here for work before. He lied and said he was a 'tourist.' He said he was on a "Tourist visa" that's a lie. Do you think these drones at immigration have a clue about his movie or anything? Nope. All they know is that he came here to work on a tourist visa. He's done. Your nation (and the USA) would do the exact same thing.
MISHA: "It's not true, you know it, I know it."
ME: "That's BULLSHIT. I work in the news media, remember? Prove your argument with links or facts please. The law is 95% of the time pretty straightforward...."
MISHA: "I don't have time for this." (Me: You mean you don't have time to think clearly?)
ME: "I have been following this story closely for a long time,"
MISHA: "This was a warning." (????)
ME: "And, if the point was to "Wake up the Japanese people" (like he claimed himself?) am I wrong? Should the film be free? OF COURSE IT SHOULD."
This is just one of many promotional stunts... to make money..... O'Barry is no better or worse than those folks in the government.
At least the idiots in the government are just following orders.... O-what-the fuck is trying to sell a movie. Figure it out. I know what I am talking about."
MISHA: "You're rude and massively off-topic. Please stop."
ME: "Misha, if you can't argue rationally, then that's fine. I do know what I am talking about."
MISHA: "You're being very emotional, I'm calm."
ME: "I have insulted no one except the hypocrite. Hopefully you will think and begin to ask questions about what you believe. He could release that movie NOW for worldwide viewing in 5 minutes.... But he doesn't.... Why? Is it because money is more important than saving dolphins?
This is a serious question I am asking you. I am an American and I am from Southern California (Hollywood), people - like this guy - are everywhere. They are capitalizing on your emotions to make money."
....At this point Misha blocks me. WAKE THE HELL UP!!!!

PS: I leave you with this choice quote from the article linked to at the top: "O'Barry first found fame in the 1960s for catching and training five dolphins for the well-known television series "Flipper", but he has recently fought against keeping the mammals in captivity."..... Ha! Don't do what I do. Do what I say! Hypocrite!!!!

See my original article on this subject here:
Marketing Japan: Japan Bans the Cove and Other Atrocities… (universal-vision.jp/wp/?p=536)
at February 06, 2016 1 comment:


VOTE 2016! Hey! Am I the only one that thinks that this Ted Cruz guy looks like Grandpa Munster? (Vote in the comments section!) 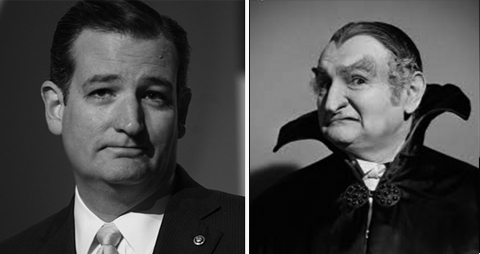