Some readers might know that I am a disc jockey in Japan. I have been doing this a long time.

Long ago, I was the assistant for the legendary DJ Rodney Bingenheimer. It's how I got started in this business. And, since Rodney is my philosophical and spiritual leader for being a DJ, I have always tried to support new bands and new things like "Rodney Sensei" does. Today I want to tell you about the two hot Japanese girl fronted bands that were, I believe, the first Japanese bands that ever graced the airwaves on Rodney on the Roq's KROQ show in Los Angeles; one of, if not thee, most legendary rock n roll radio shows in history.

Earlier this morning, I had been talking with a friend about Little Tokyo in Los Angeles in the seventies and I was recalling a true story when I realized something for the very first time! That the very first Japanese band I ever got aired on the radio in Hollywood (on the World Famous Rodney on the Roq Show) had to have been Sandii and the Sunsetz (He played it once so he might not remember).

The second one I got played on Rodney's show on KROQ, were the Go-Bangs which Rodney played heavily (He'd definitely remember them, I think.)

Here is my recollection of that time, to the best I can... 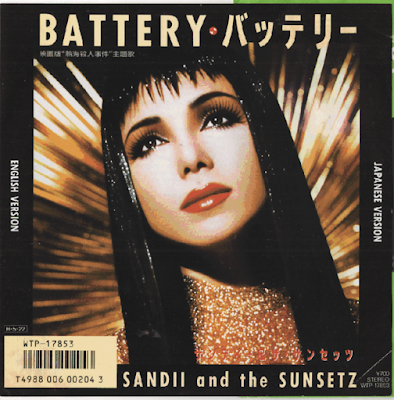 See that? That just looks like a great record!


In 1980 ~ 81... I was a university student and assistant to legendary DJ Rodney Bingenheimer.

On weekends, in the seventies and early eighties, I used to love going to Little Tokyo in Los Angeles just to hang out. Anyway, one day, I was in Little Tokyo wandering about and I walked by a bookstore. They had all sorts of Japanese magazines (duh!) and, right by the front door, they had a bin of used seven-inch records.

By this time, I had already played in a band and had a massive record collection. I became so cocky that I believed I could tell a good record just by looking at the jacket.

Anyway, I looked into the used bin and found a record by a band named "Sandii and the Sunsetz," that I thought, "This absolutely looks great!" But it was a Japanese band? How could I be sure? I couldn't. So, being a curious sort, I bought it and took it home to listen to and test my record selection skills.

It was a GREAT song! I listened to it and loved it. That weekend, I took it to Rodney's show and handed it to him and he played it!

I can now honestly say that the first Japanese band that I ever got on air - in my radio career (and on the Rodney on the Roq Show), was Sandii and the Sunsetz - Battery.

Maybe that isn't such a big deal to dear reader, but it is to me. I would have never guessed that so many years later, I'd be a DJ in Japan doing the same thing as Rodney: Finding new bands and playing them first!

Here's that video. I thought Sandii was a goddess!

Time would pass and I would move to Japan a few years later. I would find good music and send it to my friends like Rodney. Everyone liked Japanese versions of albums, because the Japanese versions always had extra tracks not available on the foreign releases.

In Japan, after looking a long time, I found another Girls band that I thought was fab! It was the Go-Bangs. I loved it!

I sent the Go Bangs song to Rodney and he liked it a lot too and played it several times. (I know he'd definitely remember the Go-Bangs!)

(The actual song, "Special Boyfriend" starts at about 2'30" into the video so you might want to fast forward to that. The other stuff is punk rock nonsense!)

For me, being into punk music in L.A. since the early seventies, I felt that most Japanese music at that time was, well,  lacking... I felt the Go Bangs were a sort of Missing Link and liked it a lot too....

The Go Gos, Bangles (in America), then a Japanese "punk taste" girl's band named the Go-Bangs... They were the first ones to get big.

Those were the days before the internet so it was hard to get information on music. Not like today...

Nowadays, there's a cool Japanese rock/garage music boom. We have the internet. I still have a radio show...

And, recently, Rodney Bingenheimer has been playing a steady stream of cool bands from Japan.

So, the point? I just wanted to set the record straight; the two bands that really allowed all these other Japanese bands to get airplay on the world famous Rodney Bingenheimer show, and the first two Japanese rock bands I got on air in the USA were Sandii and the Sunsetz and The Go-Bangs.

So, those artists have a special place in my heart and my Dj history....

If anyone from Sandii and the Sunsetz or The Go-Bangs wanna come and be guests on my show, my doors are open!!!!

Rodney Bingenheimer has been playing some cool Japanese bands these last few years too. here's a couple of them:

The Privates - Action Woman: https://www.youtube.com/watch?v=AlHfjMx31Dw
(I made this video with Ken Nishikawa and some friends. Rodney plays this a LOT!)

The Routes - Perfect Hell: https://www.youtube.com/watch?v=3RbUuHB4bcA
(The Routes have to be, by far, the most played band from Japan in the entire history of the Rodney Bingenheimer Show.)

The Rodney Bingenheimer Show is on Sirius Radio! Check it here: https://www.siriusxm.com/

Thanks to Gene Gingatake for shaking the old cobwebs loose and reminding me of good times long ago.