The Spirit of Ecstasy

I do. It is a statue of the Spirit of Ecstasy. 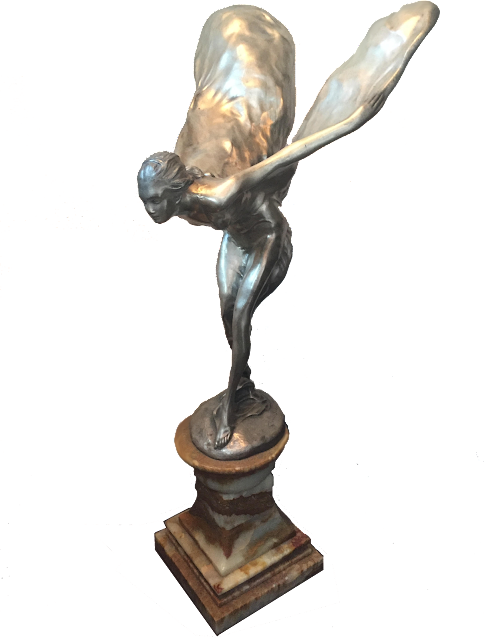 If you enter my home, at the very entrance is the Spirit of Ecstasy on a solid marble stand. It is big and it is very old and it is quite heavy. The height of the statue is about 70 centimeters tall (about 2'3" tall - 27 inches). And since it is bronze with a solid marble base, it weighs about 22 kilograms (about 48 pounds).

Most people would know the Spirit of Ecstasy as the statue that adorns the hood of Rolls Royce cars.

Since I was a young boy, I had always been fascinated by art and this particular statue. If you have seen it once, you will never forget this historic and enduring design. The Spirit of Ecstasy is in the form of a woman leaning forwards with her arms outstretched behind and above her. Billowing cloth runs from her arms to her back, resembling wings. For me, she also represents the symbolic queen of what is probably my favorite art movement of all time: Art Deco.

I had always dreamed of having my own Spirit of Ecstasy since I was small.

When I saw this statue, years ago at an antique shop, I just had to have it. My wife agreed, but, to this day, she doesn't know the secret this statue holds and what it really means to me. I am serious when I say that, since I was a very young boy, this was one of the designs that has truly held my imagination all my life, and will continue to do so, until the day I die.

But first, about the Spirit of Ecstasy herself.

Before 1910, her name was not The Spirit of Ecstasy but was "The Whisperer" or "Emily" or "Silver Lady" or "Flying Lady," and she was designed and created by sculptor Charles Robinson Sykes.

There's a fascinating story behind this statue and the people involved with its creation too! From Wikipedia:

The statue carries with it a story about secret passion between John Walter - the second Baron Montagu of Beaulieu (a pioneer of the automobile movement, and editor of "The Car Illustrated" magazine) and the model for the emblem, Eleanor Thornton. Eleanor was the secretary of John Walter, who fell in love with her in 1902. Their secret love was to remain hidden, limited to their circle of friends, for more than a decade. The reason for the secrecy was Eleanor's impoverished social and economic status, which was an obstacle to their love. On the other hand, John Walter was married to Lady Cecil Victoria Constance Kerr.

By 1910 personal mascots had become the fashion of the day. Rolls-Royce were concerned that owners were affixing "inappropriate" ornaments to their cars.... Rolls-Royce Motor Cars turned to Sykes to produce a mascot which would adorn all future Rolls-Royce cars and become generic to Rolls Royce, with the instructions that it should convey "the spirit of the Rolls-Royce, namely, speed with silence, absence of vibration, the mysterious harnessing of great energy and a beautiful living organism of superb grace to evoke the spirit of mythical beauty."... Sykes chose to modify "The Whisper" into a version similar to today's Spirit of Ecstasy. He called this first model The Spirit of Speed... Some critics and fans have given The Spirit of Ecstasy the dubious nickname "Ellie in her Nightie", suggesting Eleanor's influence.... In February 1911 Sykes presented to Rolls-Royce the "Spirit of Ecstasy." The similarity with "The Whisper" was hardly coincidental because the model for both had been Miss Thornton. The sculptor's signature appeared on the plinth and were signed "Charles Sykes."

Eleanor, our heroine, died on 30 December 1915 when the SS Persia was torpedoed by a U-boat! She had been accompanying John Walter (Lord Montagu.) He was thought to have been killed too, but survived and was saved after several days adrift in a life raft.

A beautiful woman who was the model for this iconic design? A love affair between a baron and this impoverished woman? The baron and the woman are off having an affair and their ship gets sank by a U-Boat? The beautiful woman gets killed in that U-Boat attack? The baron survives after being adrift for several days at sea? The secret history of one of the world's most famous automobiles?

Wow! What a story! Wow! The aristocrats! Where's the Hollywood writers?

But I digress, like I said, to me even as a young boy, the Spirit of Ecstacy represented chasing my dreams and flying towards success.

What my wife doesn't know (to this very day) is why I was so insistent upon buying that Spirit of Ecstasy statue when we saw it. Before we found it in the antique shop, I had never seen one in real life except the tiny 4 or 5 inch tall ones on Rolls Royce cars. And, actually, I'm not interested, nor ever have been, in cars or clothes.

But when I saw this bronze Spirit of Ecstasy statue at the shop, I knew I just had to have it. We've now owned her for over 11 years.

Sometimes work gets me down or projects that I am working on don't go well or they get cancelled (like radio or TV shows)... Creating a movie or a radio show or TV show can sometimes seem like an impossible dream....

My wife knows this about my personality very well.

But what my wife doesn't know is that everyday when I walk out the front door or I come home at night, she is there waiting for me. The lady! The Spirit of Ecstasy stands at the front door and always cheers me on.

She always says, "Chase your dreams. Never give up! Always fly!"

It must be my mental disorder that such an inanimate object can hold such sway over me and motivate me. I can't explain exactly why excepting that she has always been this way to me.

I think the story of the Spirit of Ecstasy is a fascinating one and find this sort of tale to motivate me and to make me think, "It's great to be alive."

Art that makes me happy or motivated, like the Spirit of Ecstasy does, is like magic. I hope that everyone reading this has some sort of item at home or office, be it a child's drawing, a painting, a photograph, an object or some art that inspires and motivates them. Doing so is a sort of mind control and can help you to overcome your fears.

Never forget everyone: "Chase your dreams. Never give up! Always fly!" 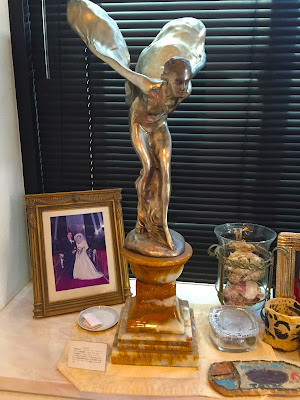 She says goodbye to me and she welcomes me home everyday.