Short Conversation With a Follower of Islam


I have a friend who has been a close friend of mine for more than 30 years. We worked together, got mad at each other, celebrated with each other and shared dreams.... I knew him when he was a young radical (well, so was I) and since...

He found a religion that fits him many years ago and has since become a very peaceful, sincere and serene guy.

I'm happy for him.

Me: "Hey, my friend... How are you? I have a question, if I may. As you probably know, I do not follow any religion (but lean towards Buddhist thought and believe all people should follow their heart's desires. So I am absolutely not against organized religion....I say we should let people worship the way they are happiest - there's enough shit in life as it is).

Many people want to blame Islam for yesterday's shootings, but, I believe that, just as there are some really lunatic Christian sects, Islam has some too. For example, so-called Radical Islam (as a generalization and possible abstract). I don't think all of Islam can be bunched in and blamed for yesterday. But I do think Radical Islam is a problem for true followers of Islam as well as those that radical Islam seeks to attack. What do you think?

Of course, the USA bombing, maiming, orphaning dark skinned kids in the M.E. 24/7 over these last few decades has a big hand in making this situation. Anyway, just wanted to know what my devout religious dear friend thought about this."  -Mike

His answer: "Hello brother. I moved back to Japan earlier this month. America is not my vibe anymore. To my knowledge, true followers of Islam would never commit these acts. Its unIslamic and against the Quran. These acts are political responses to their issues. Some of this activity goes back decades. War is a business. The media is the hypnotizer. Islam is a tranquil religion, i.e. Muhammad Ali, Malcolm X, etc.   There are those who use us for political profit and fame." - Muhammad
at June 13, 2016 3 comments:


Rodney Bingenheimer (Rodney on the Roq) came to Japan the other day. Since John Peel passed away, I figure that makes Rodney Bingenheimer the world's most famous DJ. Rodney came to Japan the other day with his friend, Kansas Bowling (she's a sweetheart!) Kansas is a film director and producer (See "BC Butcher") and, since I was Rodney's assistant over 30 years ago, I became his and Kansas' tour guide in Japan. So, since I was the tour guide, I figured I'd better take lots of photos... So here they are (with a few from my friends!) 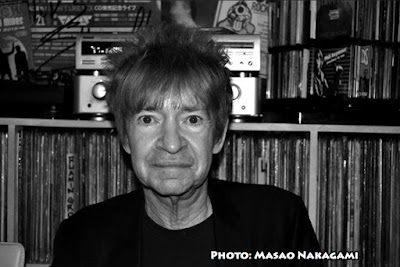 Here's what Wikipedia says about Rodney:

Rodney Bingenheimer (born December 15, 1947) is an American radio disc jockey on the long-running Los Angeles rock station KROQ who is notable for helping numerous iconic bands become successful in the American market. His contribution to the music business has been described as important. He developed a reputation for being the first American D.J. to identify new artists and play "edgy new bands" such as Blondie, the Ramones, the Sex Pistols, Guns N' Roses, Duran Duran, The Cure, Joan Jett, Hole, Symbol Six, No Doubt, Blur, Nirvana, Sonic Youth, The Bangles, X and many others.... He was the subject of a documentary... titled Mayor of the Sunset Strip. He was described as a "famous groupie, now respectable" by Mick Jagger and he has numerous high-profile friends. In 2007, he was honored with the 2,330th star on Hollywood Boulevard. 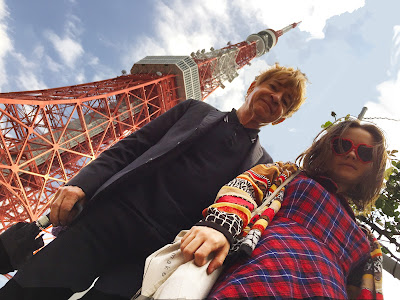 I was an unpaid Go-Fer for the World-Famous KROQ's Rodney on the Roq (Rodney Bingenheimer) for about 22 months between mid 1980 - 1981. I would clean up and organize albums that were scattered about in some rooms and also carry records for Rodney to and from his car. The best part of the job was answering the door for Rodney and greeting guests who came to be on his show. Through that I got to meet Clem Burke of Blondie, the Ramones, and a bunch of other super famous punk stars whose names escape me at the moment. The first time I got to meet Phil Spector was Christmas of 1980 and when he arrived at the door, he didn't look like a Punk so I was rude to him (like an idiot!) I didn't find out until much later who he was!... Doh! I used to go with Rodney to that all-night diner he likes (Canter's Deli) too after every show. There I met lots of people who were famous or to become extremely famous later... 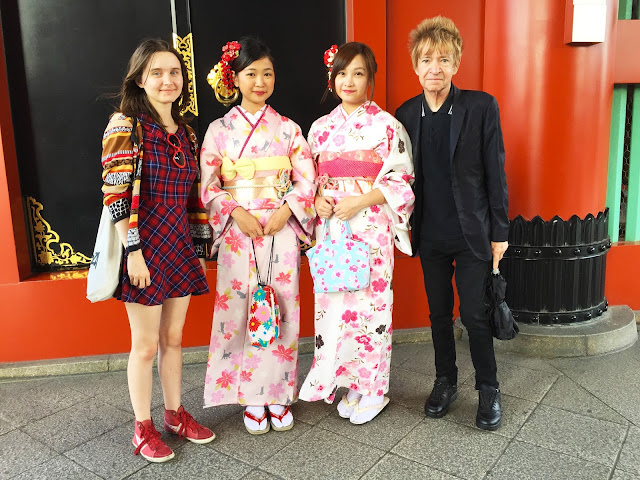 Two nice girls at Asakusa who allowed us to take photos. 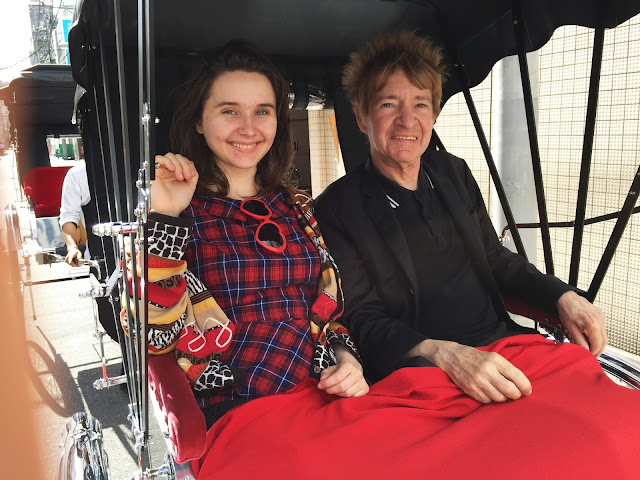 Rodney and Kansas did the Rikishaw ride at Asakusa 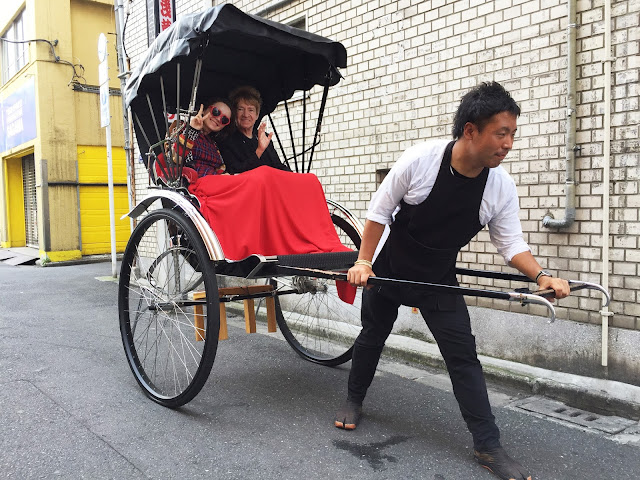 These guys run 15 to 25 miles a day carting people around on the Jinrikisha... As they have done for the last 130 years! 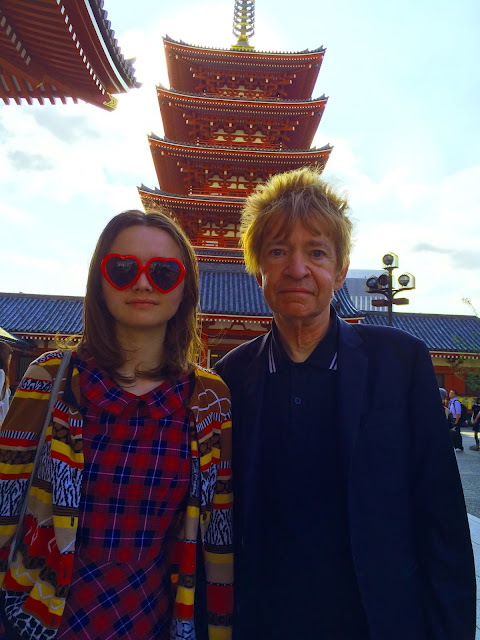 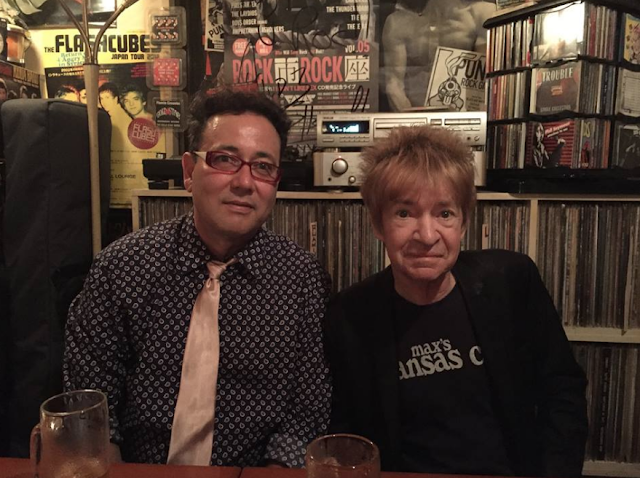 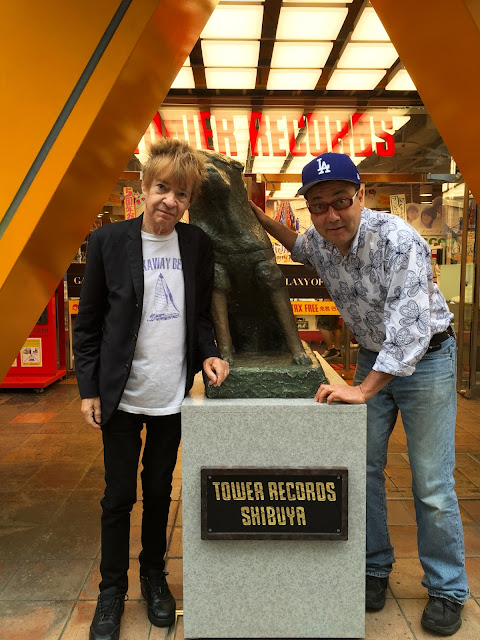 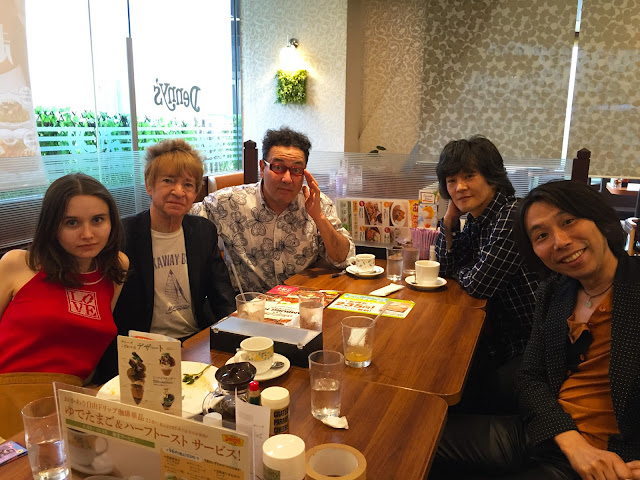 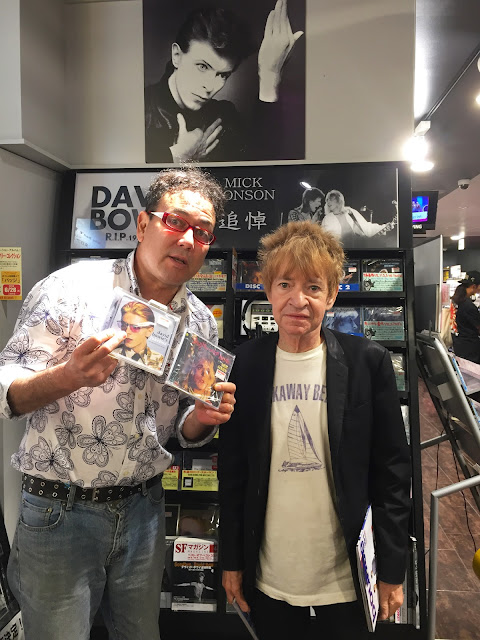 Rodney and me with David Bowie and Mick Ronson at Shibuya Tower Records. 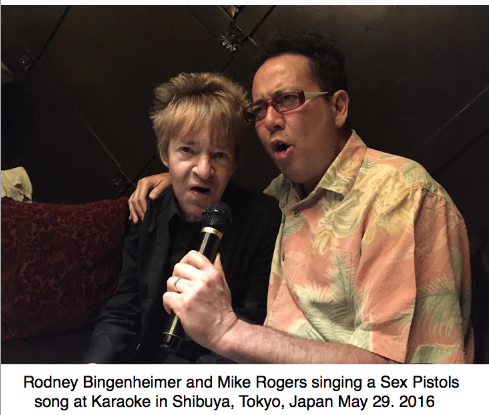 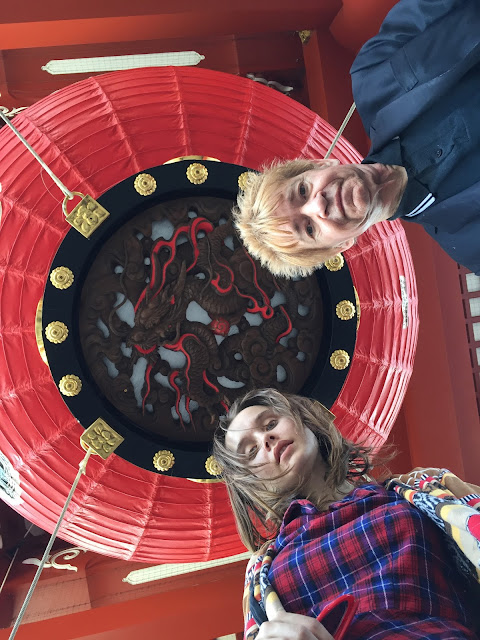 Classic Japan photo of Kansas and Rodney at Asakusa May 26, 2016. 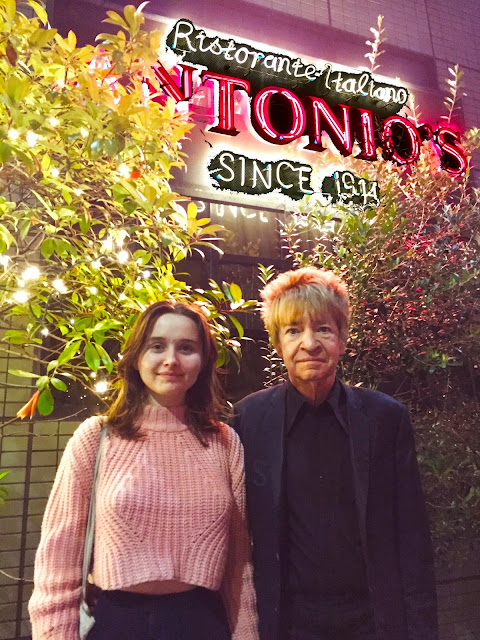 Last night in Japan? My favorite Italian restaurant, Antonio's in Minami Aoyama! General Douglas MacArthur used to dine at Antonio's. It's been there since 1944... Rodney even sat at the very same seat MacArthur used to sit at!!! Well, maybe not the exact same seat! May 29, 2016 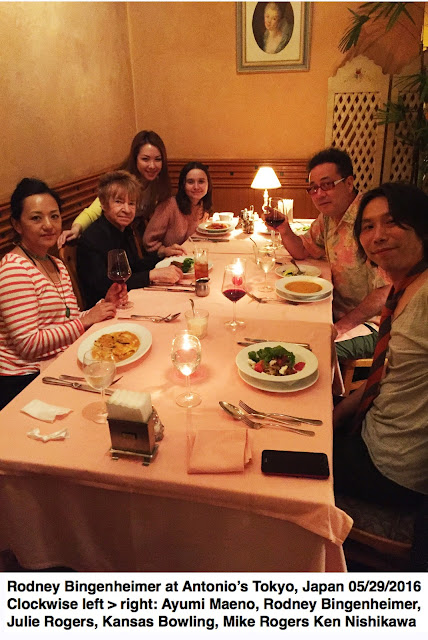 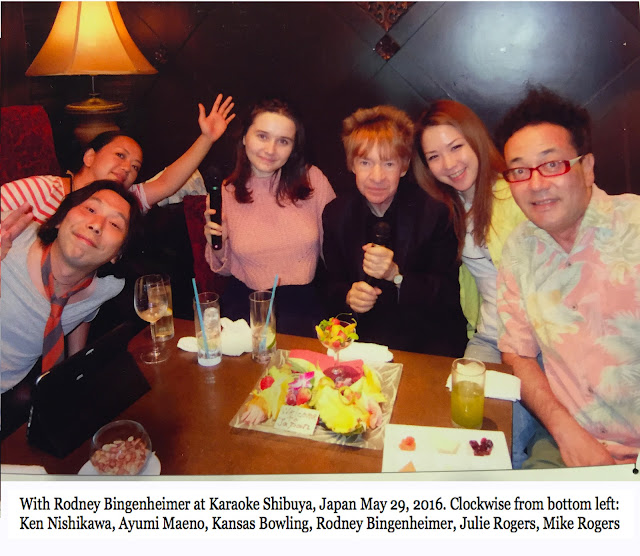 Even though I was just a lowly unpaid Go-fer back in the day, just working with/for Rodney - the most famous music DJ in the world today - was one of the best and most fun experiences in my entire life. 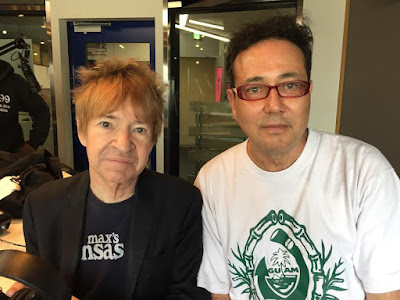