I am reposting (slightly altering) this post from March, 21 2013, because this dear man, Yasuyuki Hashimoto, passed away late last night. Thankfully, he wasn't in pain and passed quietly.

Hashimoto san lived to be 97-years-old. He was very spry and alert just up to about 12 weeks ago. Then his health rapidly began to decline. I was very surprised to see how fast it was.

It just goes to show us all how fleeting the wonders and joys of life can be.

Please read this story of the wonderful man and remember to enjoy and cherish all the wonderful things this short life gives us. Remember to live each day to its fullest. Tomorrow comes too soon.

I have been written a lot about philosophical things like life & death, purpose, respect and dedication as well as choosing a partner well. Today, I'd like to introduce to you a guy who I have met in these last few days that has really blown my mind. I also want to share some of his philosophies on living a long life. I'm sure you will get a smile and a laugh as I did.

I am so glad to introduce you to this fascinating man. You'll be glad you met him too! His name is Yasuyuki Hashimoto and he is 97-years-old. I suppose being 97-years-old is pretty cool but, in Japan, it's not that unusual. The thing amazing about Yasuyuki Hashimoto is that he is 97 and must the one of the brightest, most energetic, alert and healthy 97-year-old folks you'll ever meet... He's totally coherent and he stays in the conversation and is not hard of hearing. 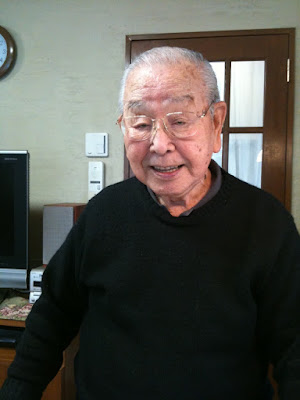 
Not only that, but Yasuyuki has never been admitted into a hospital in his entire life!!!


Get that? Of course Yasuyuki has visited doctors before, but he has never stayed overnight in a hospital in his entire life. Can you believe that!? Wow! He must be some sort of miracle of science.


But I guess he's not a miracle of science. Yasuyuki was a guy who worked hard and played hard too! Yasuyuki told me about the old days when he was a salesman for Ishikawa Heavy Industries (IHI) and he said he smoked about 1.5 packs of cigarettes a day and drank to excess nightly. 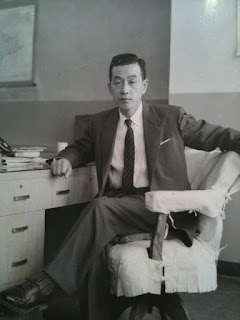 
"Mike, as you know, in Japan, salesmen must drink with their clients. I was a good salesman so I was drunk often." Yasuyuki said. His 63-year-old son added, "What!? You were drunk every night!" Looking at me the son added, "Sometimes he would pass out in the street and we'd have to carry him home. ."

"Excuse me, bartender! I'll have what he's drinking!


Anyway, Yasuyuki says he stopped drinking 5 years ago and stopped smoking about 15 years ago. 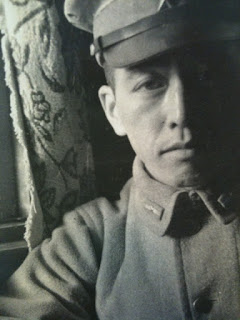 
I have met many 70-year-olds that weren't half as spry and alert as Yasuyuki is. This guy is simply amazing! Yesterday we had lunch together and we were talking about old times and he was joking about how much he used to like to drink to excess (something that I can definitely relate to). His conversational abilities are incredible.... And I don't mean incredible for his age, I mean, he's glib and funny and tells jokes!


Wow! I hope that I can be 1/2 as bright and bushy-tailed as Yasuyuki is when I'm 80! In fact, when Yasuyuki was 80 years old, his son told me of a time that his father met a stewardess at a bus stop and wound up with the young lady accompanying him back home. Imagine that! You have an 80-year-old dad who is very peppy, energetic, red-blooded and robust guy showing up back at home with some pretty 30-some year old airlines stewardess! Wow! You can't make this stuff up.


Yeah. When I grow up I want to be just like Yasuyuki Hashimoto! 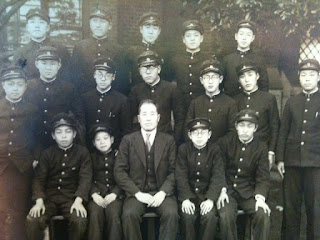 
Yasuyuki Hashimoto was born in Tokyo in 1916. He went to school in Tokyo and was conscripted into the Imperial Japanese Army immediately after university. During the war, in 1942, he was stationed in Indonesia and say he spent his time enjoying the country and fishing.


There were no big battles in the area his unit was stationed in. He did say, though, that American planes would come snooping around everyday and some of the rascals in his unit wanted to shoot at the plane, but cooler heads prevailed. Yasuyuki and the others knew that if they shot at the plane, the Americans would just come back tomorrow with more planes, so they left them alone (kind of like not whacking a hornet's nest).


He said he and his fellows soldiers would stand around and look at the plane as it flew around. The planes were so close that they could see the pilot's face! They'd stare at the pilot and the pilot would stare back and  then fly away.


This theater of the absurd went on for everyday until the end of the war. 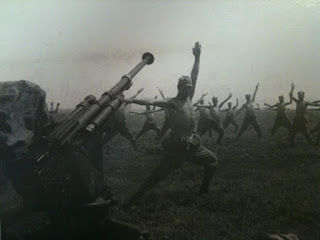 Out with the boys on the field in Indonesia 1942


About the war, I asked Yasuyuki if he and his fellow soldiers believed that the emperor was god? Yasuyuki looked incredulously at me and said, "No! Are you kidding? We weren't that stupid!" We both then howled with laughter.


Yasuyuki has many funny and interesting stories. I wish I could share them all with you. 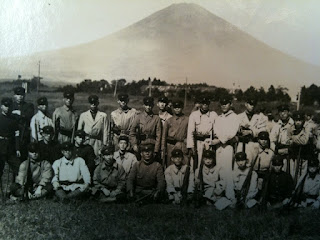 Student conscripts in front of Mt. Fuji (circa 1940)


I did, though, ask Yasuyuki two important questions. The first was, "What is the secret to long life?"


That makes sense. It reminds me, once again, of the Chinese curse, "May you live in interesting times." Yasuyuki's advice fits in well; peace and serenity and quiet and calm; those are the secrets to a long life.


I think it is good advice. I hope that I can live a boring life someday spending quiet time with my family and fishing and living among nature. 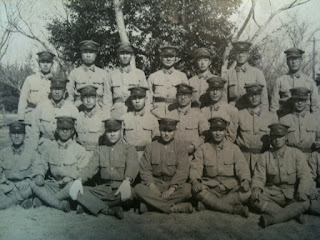 Yasuyuki Hashimoto (back row, third from right)
(circa 1942)


The second question I asked Yasuyuki was, "Do you have any advice for readers as to how to live a happy, peaceful and long life?"

To this Yasuyuki thought for a moment and said, "No. The best advice I can give anyone is no advice. I don't like it when people are always giving out advice. I have no advice to give."


Think about that, dear readers, isn't that just like Zen Buddhism? In a word, Yasuyuki's advice can be summed up as, "The best advice is no advice!"


Wow! I am taking that to heart. Think about it, folks. It's true!


The best advice is no advice!


Yasuyuki Hashimoto san! Thank you for everything. May god rest your soul...

And for you reading this, take a moment to be thankful for all you have; give your spouse and kids a hug.

Oh, isn't it grand to have good genes. And to avoid accidents. Why people want to end their lives by suicide when death will come soon is enough is bewildering. Life's short. Five, 55, 75, 95... It's all relative.

That was my favorite kind of reading.

It's kind of invigorating and totally inspirational.

Thanks for taking the time to produce it.

I believe most people want long, peaceful, and what many would call boring lives. The question comes to my mind, what can one do, about the few though want short, exciting, and dangerous ones?

There are many people, mostly young men, who are willing to blindly dive head first into the depths of depravity.

For example, there's a Spanish saying amongst many of them in Mexico, "Better to live like a lion for a day, than a lamb for a lifetime." What can one do when there are thousands, if not millions globally, who are willing to steal, maim, rape, and murder?

"Better to live like a lion for a day, than a lamb for a lifetime."

There are many college courses in the unitedstate teaching the same idea. I was infected with the thought, it's very very hard to shake. And it's like a boomerang.

That 'can' be a good thing.
I think the good thing has been twisted and contorted into something else. Perhaps it's a consequence of living under the thumb of conquest? ...In the unitedstate and too many other places. ...Everywhere?

But at the same time, Mr. Nobody, and nobody in particular, there's this idea expressed by Pamela Des Barres:

I guess it's up to the individual to find the balance.

China is a very ancient society and much wisdom has been born from it. One of the great and most famous Chinese curses goes like this: "May you live in interesting times."

This, I've come to know, is most definitely a curse.

"May you live in interesting times."

This, I've come to know, is most definitely a curse. - MMJ

No doubt about it. 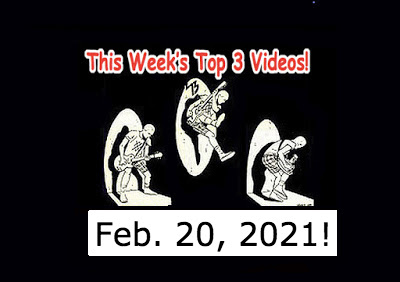