My Serious Commentary on Today's Japan Elections (And Some Hot Babes!)


"You're talkin' a lot, but you're not sayin' anything... Say something once, why say it again?" - Lyrics from Talking Head's hit song, "Psycho Killer"

Japan's politicians are the same as any other politician the world over... Perhaps even more so.

They never really say anything. All their speeches and words are merely jingoism and platitudes: they talk a lot but they don't say anything.

Their political posters are even worse! You know posters that say stuff like what all politicians say, "We can change," "Change we can believe in," or "For a better America," "Hope,"  "Believe!"... And ones Ronald Reagan used are pretty much standard fare the world over: "Make (your countries name here) great again!"

Well, you get the picture... Lots of words but they say absolutely nothing.... Japan is the same... Only more so...

Today there is a big political election going on in Japan (look for the Nikkei 225 to start dropping after today's election is over!) This side of the powers that be say that we must stay the course and keep with the successful program. That side says that the course we're on is a failure and we can do better....

No one, except a few (who can't win), actually make any concrete statements.

Today, for you dear reader, and regular dear reader, Axel, I thought I'd make my comments on the election and tell you who I'd vote for.... I mean, if I voted. Which I do not.

I believe in the saying, "If voting could change anything, it would be illegal."

Anyway, I took a stroll down to the local grocer where there is a billboard full of posters for the poseurs, er, I mean, politicians who are running for office and gunning for your vote. Let's take a gander at the menu, shall we? 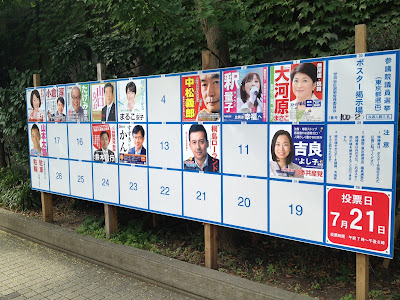 The poster billboard for all the folks running in the elections. Only 13 posters out of 19 slots? Hmmm? Perhaps the missing politicians took surveys and realized they didn't have a snowcone's chance in hell of winning in that area and they've given up without a fight... Or perhaps they figure that printing posters with useless platitudes is a waste of money. I vote for that. 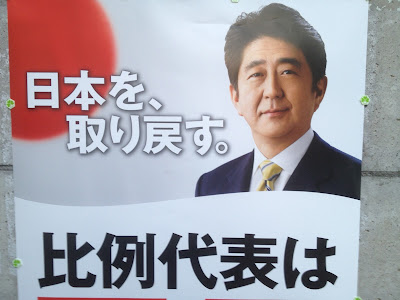 This is the current clown ruining the nation. He's been in power for more than six months or so, yet his poster says "Let's take back Japan!" Take it back from whom, I wonder? I hadn't noticed it missing! Did it go somewhere (besides the sh*tcan) since he's been in office? I don't know. Anyway, I'd never vote for this guy. 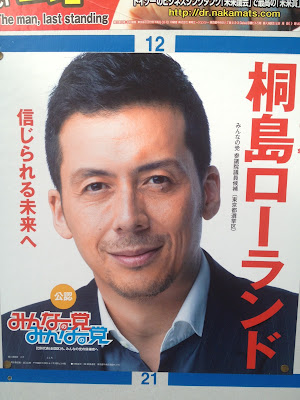 I've never seen this guy before. His phrase is "To a future you can believe in!" Guffaw! Really? Is that kind of like Buzz Lightyear's, "To infinity and beyond"? Anyway, I'd never vote for this guy as his name is "Roland." What the hell kind of a name is "Roland" for a Japanese guy? What? Maybe he's half-Japanese like me? If so, I'd never vote for him. Can't trust these foreigners, ya know! 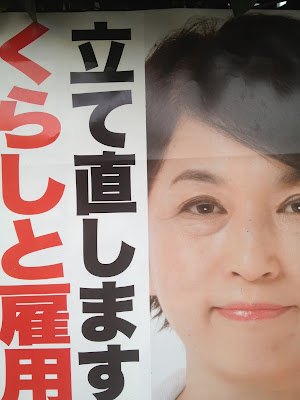 This lady says she wants to "Fix up and reform." Nope. Can't vote for her. Anything a politicians says, "Reform" you know that means, "Raise taxes." 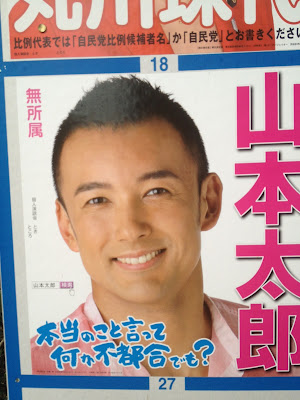 Can't vote for this guy. This is the guy who used to be on TV but was dumb enough to start blasting the biggest and most powerful energy company in all of Asia publicly so he lost his job. Sure, it's good to speak your mind, but when you do it, make sure the people working with you don't lose their jobs too... Never heard the saying, "Don't bite the hand that feeds you?" I was wondering what happened to him... Now we know. He can't get a real job so he's now joining forces with the very same people he was fired for criticizing... Well, who said the quote, "Actors and actresses are to be seen and not heard"? His little catch copy is interesting and sounds a bit like Al Gore; "What's inconvenient about telling the truth?" Nope. Can't vote for this guy. 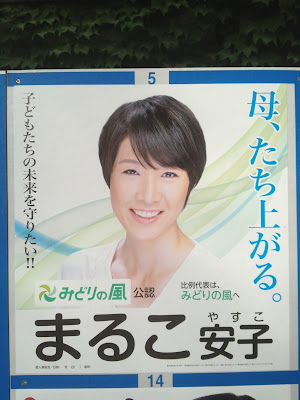 OK. The field is starting to look better now, and I mean that literally. Think about it, would you want to see the old guys on TV or this girl? Her platform is pretty "girlish" as it says, "Let's help mom's" and "Let's protect the future of our children!!" Well, OK. How can you argue with that? One vote. 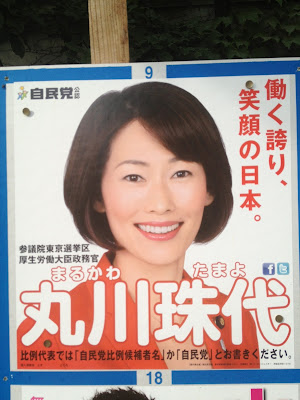 Wow! Hot chick alert! I think I've seen this lady before somewhere! I have! She used to be a TV Asahi announcer! Her name is Tamayo Marukawa (see her photos here) Woo-Hoo! I'd vote for her in a second! She's hot! Not only that, her poster says, "Proud to work, smiling Japan!" Well, what does that mean? I don't know but she gets at least one vote for being HOT!!!! 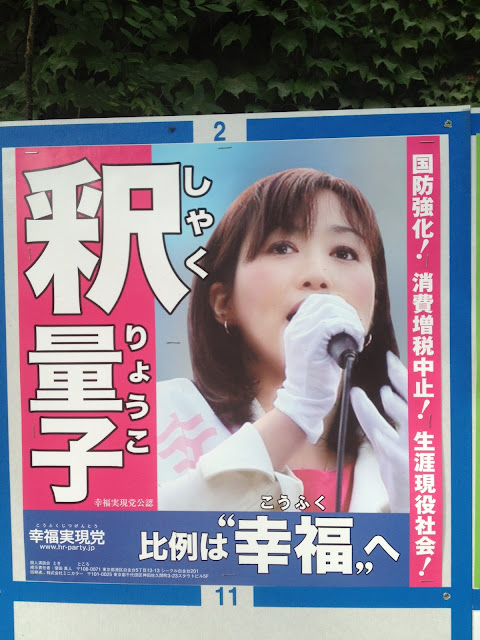 Woah! Hold the presses! This chick is Hot! Hot! Hot! She already gets all my votes without even thinking.... (I don't need to think, I've proven all these politicians have nothing to say!) Wow! What a face! And look how she's holding that microphone! Kinda reminds me of something.... What could it be? If girls like her were all running for office, then the Japanese would have a good reason to screw up their L's and R's in the upcoming erection... ELECTION!!!! Sorry about that!

Anyway, besides being the Japanese version of Babe-raham Lincoln, her platform is good too. She says, "Protect Japan" (Hoo hum... Got it, babe. Whatever you say!) Then she says, "No Sales tax increases" (What? Serious? OK, you could look like Imelda Marcos's ugly older sister and I'd still vote for you with that platform!) And she says, "No retirement society" (Wow! I'm in love!)....

Well, that's it, folks. I think it's pretty simple to see who I'd vote for... But, she'll never win with a common sense platform like that. People don't want to face reality. They'd rather have "Hope" and "Change" over facts. Which means, I probably shall never see her again.... Alas...

Damn that was funny.
Those girls weren't bad either.
That microphone chick will be in my brain for a couple of days for sure.

The whole time (half the time actually, those girls weren't bad) I'm reading this I thought of how the politicians have vans driving through the city while blasting their message out through speakers on top of the van.

I found that simply shocking and amazing. In America, only the fire trucks, the police man, and the ice cream man get to do that without getting a ticket.

... And here I was going to wait until the end of Summer to come back to this blog.
I'm glad I didn't do that.
Sum fun this was.
...Now where did i SET THAT takillya shot glass down?

Also, I've been meaning to say, I don't know how you down three bottles of wine.
I tried my best the other night and could only do two.
The hangover from that is powerful stuff. You must be stronger than I.? No way could I do three freaking bottles.

Ha.
I bet this is the kind of conversation the politicians have "behind closed doors".

Wow, I wish they had posters of candidates in the states. I don't watch television so I usually have no idea who is trying to run my life and take all my money.

"And look how she's holding that microphone! Kinda reminds me of something.... What could it be? If girls like her were all running for office, then the Japanese would have a good reason to screw up their L's and R's in the upcoming erection... ELECTION!!!! Sorry about that!"

Good stuff Mike :-D. This type of politicians' marketing (full head-shot posters with empty promises/slogans printed next to them) is pretty widespread in Europe as well in my experience - except in the UK, where local politicians are pretty much faceless (they probably prefer to remain anonymous lest they get recoginsed in the street and verbally accosted, or even worse)

What is worse this time of year in Tokyo, swarms of mosquitoes, or swarms or election vans?

Anonymous asks* "What is worse this time of year in Tokyo, swarms of mosquitoes, or swarms or election vans?" Of course the answer is "yes!" Chuckle!!!! Jesus! It is raining like a mutha right now! Holy!!!!!

Numbers six and seven are pretty hot too.
Number seven looks a bit like Ann Curry.
I worked with a supervisor that would race to a bar after a third shift to catch Ann giving the news on the TV in the morning while he had a beer.

[I felt bad for her for getting fired by Matt Lauer. Even if she is just a talking empty head.]

My supervisor was in lust.

I can't say she wasn't attractive.
As for that, I'm kind of surprised all the politicians aren't women.

Ha, they all are, some are men though.

Well, Mike, There you go again: Being Reasonable! Interesting times when the Commies are ones being most worthy of a vote. (And yes, I agree: she is rather pleasing to the eye.)