Japanese Girl Rock Bands (And More) That Matter in 2017! 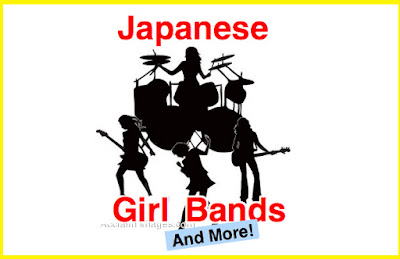 I have culled the list to exclude bands that, for me, seem to veer too far into the J-Pop arena. Personally, I don't really like J-Pop. But I "get it" why some of those groups are popular. Hell, the first group I ever liked was the Monkees and the first 7-inch record I ever bought was the Monkees, "D.W. Washburn." So, I can understand why some people and kids like that kind of music.

Also, I can respect it. I mean, anyone who can do music and make a living at it as an artist must be doing something right. I applaud them...

J-Pop, K-Pop and America's "Hit Parade of Hell" is just not my cup of tea.

My tastes have "matured".... Bwa! Ha! Ha! (My testes have "matured"? Isn't that hilarious?) Can you imagine the amount of ego it requires to make a statement like that? My god! I hate conceited DJs and "Musicologists."

My point is I am trying to stick with what I personally really like. After all, isn't everyone a critic?

But to steal a line from Spinal Tap, "Enough of my yakking. Whaddya say? Let's boogie!"

In the first issue of this "Japanese Girl Rock Bands That Matter in 2017," I didn't include today's first band. Their name is TsuShiMaMiRe. I got lots of complaints from people for not including them, but I didn't include them because I heard that their drummer had quit and was replaced by a guy! (So they can't be in a "Girls" band list!) Now, I hear that the guy was just temporary???... When I find out what is really going on, I'll let you know.

Their Wikipedia only lists two of the original girls members as being active now.

From Wiki: Tsu Shi Ma Mi Re ... is eclectic punk rock, mixing noisy and pop instrumental sounds with idiosyncratic, quirky, often funny or disturbing lyrics. They are one of the many bands to have become famous in the United States through SXSW music festival, and also through their performances at anime conventions and at "Japan Girls Nite" U.S. tours. The band's original lineup consisted of Mari Kono on lead guitar and vocals, Yayoi Tsushima on bass, and Mizue Masuda on drums. They originally formed the band while in college in Chiba, Japan. In January 2017, Mizue announced she was leaving the band to pursue other projects. https://en.wikipedia.org/wiki/Tsu_Shi_Ma_Mi_Re

Next up is a band that is introduced to us by my good friend, Bee Bee Clark! "Bee Bee Clark? I've heard that name before!" You say? Yep! Bee Bee is one of the criminal master minds who made the definitive Japanese Garage Rock Movie, " Garage Rockin' Craze." It's freaking too cool! I can't find a

Next up is a band introduced to us by The Routes lead vocal and guitar, Christopher Jack. It's Samehada Shiroko & Dynamite! I think that roughly translates to: "Shark skin ass and dynamite." Bwa! Ha! Ha!

Samehada Shiroko & Dynamite have been playing together for 4 years now. And they are from Fukuoka and on the Sasanami Label. The singer is an artist and she does all the artwork for the CDs... They even opened for the seminal Japanese Punk/rock band, "Sheena and the Rokkets!" Wow! They put on really wild live shows, and they're constantly playing up and down the country.

Next up is a band that your mom would not approve of! It's Otoboke Beaver! Their Facebook page says, "We are Otoboke Beaver "Japanese girls ‘knock out or pound cake’ band”!!!!!!!!!" OK? I got it! Lots of the bands on today's list don't have much of a Social Media presence or even a Facebook page, but Otoboke Beaver has one: https://www.facebook.com/Otobokebeaver22/

Is that freaking cool, or what?

Next up is one of the hottest girls groups on the planet! They are called Kinoko Hotel (Mushroom Hotel). This band has been around since 2007 and do a sort of Showa era retro rock. They just released a new album last year. I'd like to post a full video from that, but the label won't post them in full... So here's an edited version. This band is HOT! I love these girls!

In the west, Heavy Metal seems to always be a seller, in fashion or not. In Japan, it's Rockabilly. There are lots of good rockabilly bands in Japan. Here's a Rockabilly band that sounds great! The Learners! The Leaners are a 5-piece band with Sara as lead vocalist and I hear she is a professional model! Wow!

Learners - I Want You To Be My Baby
https://www.youtube.com/watch?v=aiEWcShzypc

Next up is a trio named Bo-Peep from Fukuoka, Japan. (Fukuoka? Kyushu Japan? There sure are a LOT of hot bands from down there. I think there must be some sort of boom going on and I approve!) Bo-Peep call themselves "Sheet Metal" and "Alternative Punk." They were guests on my show about 10 years ago.... Why isn't this band more famous? Here's their Facebook page: https://www.facebook.com/BopeepJapan/

Next up is a band who claim to be "from Japan." (Well, duh!) This band was introduced to us by the leader of the world famous Routes (who also hail from Kyushu!) The band's name is "The Swamps." Their bio on Facebook is quite funny. It says, "Imagine a band with Moe Tucker of the Velvet Underground on drums, Chuck Berry/Johnny Ramone on rhythm guitar and Link Wray on an acid trip on lead guitar. Bass? They don't need no stinking bass. Vocally many of the tunes were a mix of Lux Interior of the Cramps meets Cookie Monster (especially when the vocals were done through the guitar's pickups as they were on many of the tunes). At times it was noise trash rock and at others they locked into a serious rock rhythm."

And speaking of Kyushu again, here is the band that's been getting TONS of airplay on my show, "WTF?" (Please come "Like" our FB page https://www.facebook.com/WhattheFunday76.1/) and on the World Famous KROQ in Los Angeles on the Legendary Rodney on the Roq show as well as stations around the world. It's The Routes and they are Japan's best kept secret!.... Until now! Go Like the Routes' Facebook page: https://www.facebook.com/theroutes/ The Routes just released their latest wax and it sold out within days (But I think they are back in stock. Grab one while you can!) This is the debut video from that release.

Next up, once again.... Another band from Kyushu??? WTF??? It's the awesome Titty Twister! I love this band! Their Facebook page (https://www.facebook.com/Titty-Twister-187768281258674/) says: "Titty Twister, from Fukuoka City Japan, was formed in 2002, by Howlin' Kimiko, and Dee Dee Kyoko. The band plays exciting, all original Rock n' Roll, and covers such styles as Garage Punk, Pop/ Bubblegum, 70's Punk, and Rockabilly. Come on, get Twisted!!" These guys should be on air constantly!

Next up is a Japanese girls band that just celebrated their 20th anniversary (and they were guests on my show a few months back!) It's The Noodles! Their bio says, "Noodles is a Japanese alternative rock band currently consisting of Yoko (vocals/guitar), Ayumi (drums) and Ikuno (bass). The band is originally from Yokohama, where they performed their first show. They are well known for the song "Love My Life", which they recorded for the movie of the same name, Love My Life."

Hope you enjoyed this.

There is a rock n roll boom coming to Japan before the 2020 Tokyo Olympics and I can see it coming. I wrote to a close friend the other day: "It seems to me that what is happening now in Japan reminds me of the late 1970s Punk Boom in Los Angeles, 40 years ago... I think the same sort of thing is happening again here.

I am lucky because I have seen this before when I was in the Rotters (https://www.last.fm/music/The+Rotters), so I have seen this before, but not too many people have… So, I think most Japanese rockers don’t realise what is going on…. I believe that what is happening now is a legendary time in Japanese rock music… These bands are all a part of it…. There is a music movement happening in (Tokyo) Japan now…. The music boom is just starting. I know it. I have seen it before. I have the feeling of Deja Vu."

Anyway, there are lots of other good Japanese bands, so if you know one, let me know. - Mike

Oh, and be on the lookout for the biggest rock n roll movie to come out of Japan in years.
It's hitting theaters this autumn 2017!:
"Ghostroads - A Japanese Rock n Roll Ghost Story."
Here's the trailer: https://vimeo.com/210533272 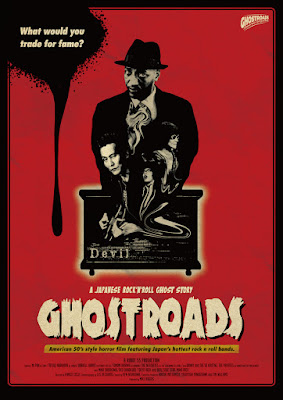 Mike spoils us. Just like the fanzine writers of yesteryear, he culls through all the talent and makes our search easier. Japanese bands : hell I still like the 5678s from decades past.
,

Let us hope your deja vu is correct.

What no Band Maid? https://www.youtube.com/watch?v=Uds7g3M-4lQ