All of Japan is Under Invasion! This is War!

Attack of the Monster Mogura!

The radio crackled on, “SOS! SOS! SOS! This is an emergency! The entire city of Tokyo is under attack!” (Scary music starts here).

A national emergency has been called! Tokyo and all major Japanese cities are under invasion from a dark and hidden enemy! This enemy numbers in the millions and they are living near you, right now; they are under your streets and under your homes! 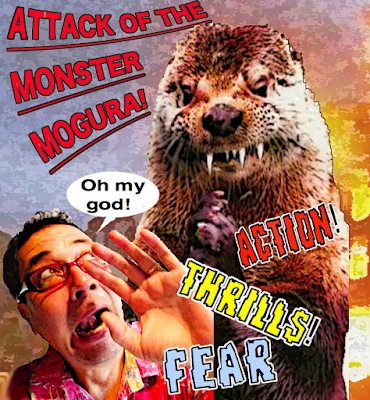 The Mogura are moving about freely in the sewers and pipes running underground in Tokyo and about all of our formerly beautiful Japanese cities. They move around because our underground sewage pipes are old and cracking and the government does not have the money to repair all these cracks and holes in the sewage pipes! The government is helpless to stop the Mogura.

There is nothing we can do!

Except, I have a secret weapon, ladies! And, if you ever have a mogura problem at your home or garden, then remember this little article, because this article will save you a lot of money. How? Because getting professionals to come exterminate the mogura around your house or garden is very expensive and it takes a long time! Also, I don’t think it is a good idea to be putting poisons around the house or garden especially if you have children or pets.

But this article will teach you how to get rid of mogura the easy and cheap (and delicious – especially for kids) way!

Confused? Let me back up and explain from the beginning.

A while back, I started noticing that the road in front of my house was sinking. Around the neighborhood, I saw holes in the ground and in the street near other people’s homes. The holes weren’t around my house, so I thought it was no problem.

Then one day, a big hole opened up in the street front of my house. Now this was a major catastrophe!

As the days went by, the holes got larger and larger. The one in front of my house became so large that it was dangerous! Someone could trip in it! We called the local ward office. Those lazy people came out and said they couldn’t do anything about the holes because the road in front of our house is a private road.

Then we called the water company, the gas company, the electric company, I even called Domino for a pizza delivery! They all said they can’t do anything about it because it was the responsibility of the ward office. 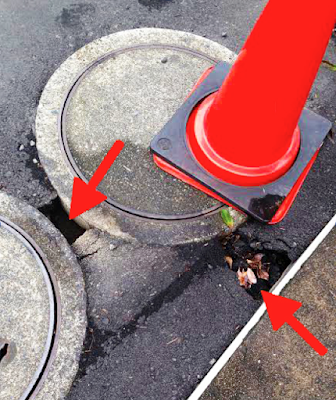 The little bastards are making so many holes underground that the street is starting to cave-in. The construction workers told me that this is a common problem all over Tokyo!

Finally, as the holes in the road in front of my house started to look like moon craters, we knew that a neighborhood emergency meeting had to be held! I put my wife in charge of everything. Why? Well because I am merely the neighborhood Handsome Foreigner® and I can’t vote so no one will listen to what I say or what I think.

My wife certainly doesn’t listen to me.

Anyway, the entire neighborhood got together and decided to pitch in money to fix the road. So a company was hired and they came out to fix the holes. It was a great success… For about a week. But, soon after that, the road began to sink again and the holes began to re-appear.

An expert was called out to investigate. He looked around carefully, wiped his forehead and looked at me with an evil stink eye and said one word, “Mogura! Absolutely, it's mogura!"

"Mogura!" Just the sound of the word strikes fear in the hearts of men! Fear of the Monster Mogura! (R)

The neighborhood discussed hiring professionals to come exterminate the mogura. But the experts told us that it was impossible. They said that we could kill the local ones, but if the cracks in the sewer pipes weren’t fixed, other mogura will just come from other places. They told us that there are millions and millions of mogura running around in Tokyo sewers. There’s no way that you can kill them all. You can kill a few here but others will come from other towns and cities through the cracks and holes in the pipes.

The neighborhood ladies were all totally frightened. I calmly told them all not to worry, for I have a secret weapon. I would get rid of the mogura… It would be, how should I say, “Delicious revenge!”

I winked at the neighbor ladies, gave them a ‘thumbs up,’ and slowly turned around just like a Hollywood movie star and walked away. Surely, they must have all thought, "What a smart and handsome foreign gentleman!"

So let me explain how you can get rid of mogura simply and cheaply.

When I was a small boy, I lived on a farm. Because of living on a farm, I knew that mogura love the smell of oranges. I also knew that Mogura love to eat orange flavored bubble gum. And that’s the secret! Mogura love the smell of oranges and they will eat orange flavored bubble gum.  But if they do eat gum, their stomachs cannot digest it, so after eating it a few times, it will kill them. Really!

When placing the gum on the ground near the mogura holes, though, absolutely do not touch the gum with your hands. Mogura won’t eat anything if it smells like a human, so wear gloves when you handle the gum! You will know the next day if the mogura ate the gum or not. If the gum is gone, put some more there the next day… After a few times, the mogura won’t come back.

As the workers were repairing the street and fixing the holes, I laughed like a mad scientist as I put a few Orange bubble gum balls near the holes in the ground near my house.

“Enjoy your last meal, Mr. Mogura!” I said in my best Clint Eastwood voice as I smiled, dropping the gum.

I was happy. Not only was the road being repaired, but the mogura were in for a delicious surprise tonight!

Thank god for Orange bubble gum balls. I’ve loved them since I was a kid. Not only does it taste great, I can blow bubbles with it, and chewing it helps me to relax...

...and, you can use them to kill the mogura.

Mike: How interesting... I had NO freaking idea that Mogura existed in Japan, at least not in the urban areas!!!!
I applaud your ingenuity in attempting to resolve the mole problem.
Now... you might be able to kill them... but you won't be able to get rid of them.
What will you do when you have decomposing piles of mogura in the sewerways? The smell... not to mention possible disease... dude... you are a handsome guy - for a foreigner - but are you not substituting one problem for an outbreak of the Plague? You may need Godzilla to burn the bodies to avoid the spread of disease.
I hope I'm wrong, of course... 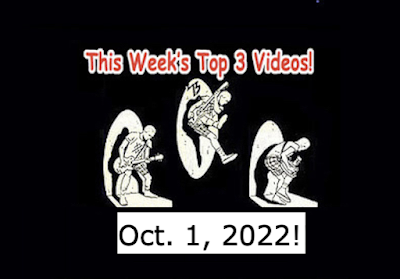