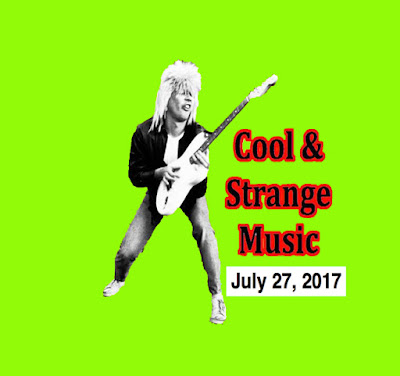 Once again, it's time for our monthly dose of Cool & Strange Music.

Today I have some more wild music, this time from the more "funny" side of things. If you like life's finer things: Cute dogs and cats, summertime and doing the twist; The Rolling Stones and Heavy Metal Marching Music - featuring one the world's greatest heavy metal marching bands - then you, my friend and friendette, are in the right place!

First up is said Heavy Metal Marching band. These chaps are from the Netherlands and have taken "turning the amplifier up to 11" to a whole new level; twelve or even thirteen! Their name is Blaas of Glory and they are hot. All across Europe, they've been selling out stadiums, arenas, er, hotel Starlight ballrooms, uh, shopping streets to wild and enthusiastic head-banging audiences. 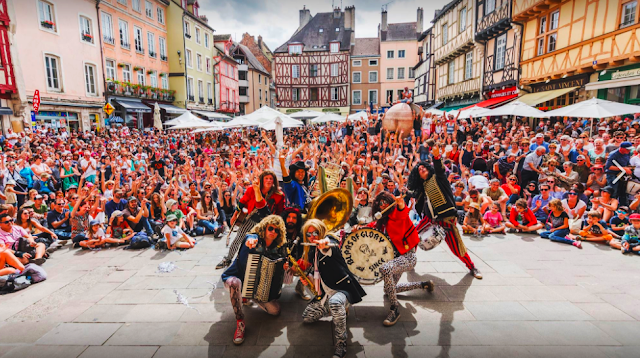 This definitely has to be one of my favorite heavy metal acts in the entire history of rock! These guys are fab and they have a great sense of humor and they are awesome musicians. Oh, and their webpage is hilarious! Go there a scroll your mouse over the band member's photos: http://www.blaasofglory.nl/

They've just released their album, "10 Years of Heavy Metal Marching" and it is one of the hottest albums of the year! Today's video is a special treat as it just came out a few days ago! Oh, and of course, they have a Facebook page: https://www.facebook.com/blaasofglory/

Sticking with acts from Europe, next up is a cool remix just in time for summer. They go by the name of Jive Bunny and the Master Mixers. They were introduced to us by alert reader, Koichi Hamada (AKA: Brazzil san). Below is a photo of Jive Bunny.... For what it's worth. 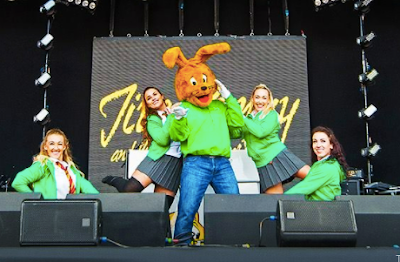 Jive Bunny and the Mastermixers throw together a fun mash-up of a bunch of songs that bring the summer and the ocean and dancing outta your speakers. Their bio says, "In 1989, Jive Bunny arrived on the music scene. From their humble surroundings in Rotherham to a global platform, Jive Bunny & The Mastermixers achieved 3 UK number one hit singles and have sold over 15 million records worldwide!"

Wow! OK? Get ready for the Jive Bunny and the Mastermixers and get ready to "Name That Tune!"

#2) Jive Bunny And The Mastermixers - That's What I Like https://www.youtube.com/watch?v=GiwGQGIix7U

Speaking of summer and surfing and Hawaii Five-O.... (Hey! Whatever happened to Jack Lord?) Let's go across the USA to the west coast of California! Today's #1 is a band that brings everything together. Now, if you want a hit on Facebook or the internet, what s the one ingredient that every photo or video must have? That's RIGHT! A cat or a dog licking its balls! This video has them all. These dogs are so cute that they are cuter than a hello kitty lunchbox with a Snoopy and Woodstock thermos in it!

Oh, the Tearaways also have a Facebook page: https://www.facebook.com/TheTearawaysUSA/

BONUS TRACK! And today we have a special present for you! Since our first track today was Heavy Metal marching music, I have another surprise for you! It's called "Harp Rock." Rock music done on a harp! This track features Camille and Kennerly, two identical twins who are awesome goddesses of rock, er, harp.

Their Facebook bio says: "Young harpists Camille and Kennerly Kitt, known as the HARP TWINS, have achieved extraordinary success by taking Electric Harps and acoustic Concert Grand Harps to unprecedented levels and smashing boundaries between different genres of music. The duo has amassed over 1 million fans across their social media sites and over 58 million views on their YouTube music videos, easily making Camille and Kennerly the most followed and recognizable harp duo in the world. As actors, The Kitt Twins have appeared in commercials, TV shows, and three feature films - two of which also feature the twins performing on their harps."

Is this cool and strange, or what? And their Facebook page has over 600,000 Likes! Holy shit! https://www.facebook.com/CamilleandKennerly/

Wow! I'm in love for the first time this week!

Well, that’s it for today! Hope you have a great rest of the week and hope you stay Cool and Strange!

And if you like new music and alternative artists check out the weekly Top 3 here: http://robot55.jp/?s=Top+3+videos

Mike has been a professional music/TV/radio/anime-related program producer in Japan since the eighties. He began in the music business in 1977 as lead vocalist with the legendary Los Angeles Punk Band, “The Rotters” (Sit on My Face Stevie Nix.). As a university student, he was assistant to the legendary Rodney Bingenheimer (Rodney on the ROQ – KROQ Los Angeles from 1980 ~ 1981.)

Mike was the first and only foreigner in Japanese history to become the General Manager of a major Japanese broadcasting station (TV Tokyo owned InterFM). Has produced a few smash hit programs (some real losers, too!) and several of Tokyo’s highest rated and most famous radio programs. A recent hit program was “The TV Show” (Set Program with “Ninja Slayer”) which, between April – Oct. 2015, garnered over 10 million viewers. He is currently producing and hosting “WTF?” the hugely popular Sunday live show on InterFM 89.7.

And his life’s dream is his just completed full-length motion picture, “Ghostroads – A Japanese Rock and Roll Ghost Story”which will be released by a major Japanese motion picture company and in theaters all across Japan in Autumn 2017. (See trailer here: https://vimeo.com/210533272) … Oh, and he likes to write about himself in the third person!)

Harp Twins - okay... I'm in lust... though hearing all those rock tunes (I surfed) played on harp made my diabetes kick in. Too sweet.

As for Blaas of Glory - cool. Do you remember Dread Zeppelin?
That Jive Bunny crap was done decades ago... likes some sort of Hooked on Classics crap.
The Tearaways was fun stuff re: Naughty Dog - kindda raunchy. I could listen to that one a few times!
As for whatever happened to Jack Lord, the last time I saw him on the NEW Hawaii 5-0, a couple of years ago they CGI'd him into an episode. It was so poorly done that they made him look like the Crypt Keeper from Tales From The Crypt.
The real Jack Lord passed away January 21, 1998, in Hawaii, of course.
Cheers!