I like to walk around and take photos of beautiful people. Recently, I've been doing that a lot to and from my way to work. I always use my iPhone as it takes great photos!

Here's a few that I have taken in the last week or so. I hope you enjoy them.

Last of the Mohicans? 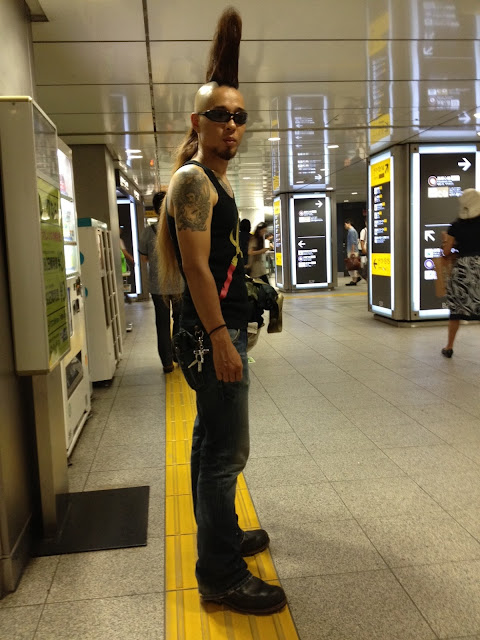 I saw this guy at Shibuya station at around 9 am and was wowed by his haircut. I wonder if he works at a bank or a credit card company? Nah! Probably not, eh? I stopped him and asked to take his photo. At first he declined, then I showed him some of the awesome photos from my last session of "Osaka Fruits! Wild Japanese Fashions!" taken in Osaka and he thought those were really cool so he said, "OK!" For the photo's composition, I posed him for a brief second along the yellow line for the sight impaired people and standing sideways to really get the feel of a "straight up and down" world. Totally fits his awesome hairdo! (Notice that his pony tail goes down past his elbows!) 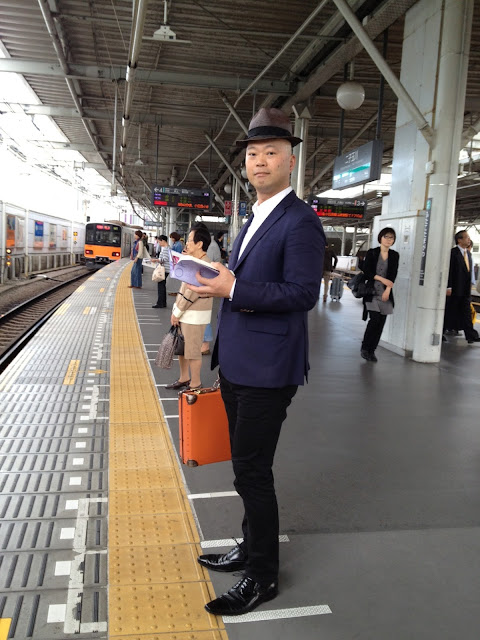 I saw this guy at Futakotamagawa station and thought his fashions were so outdated that they are actually cool. He is unforgettable in his "Mr. Magoo" style clothes that looks like he stepped right out of a clothes catalogue from the Showa era - maybe 1965! He's cool because he has his own unique style and is proud of it! Take a close look at his face and his shaved head and hat: 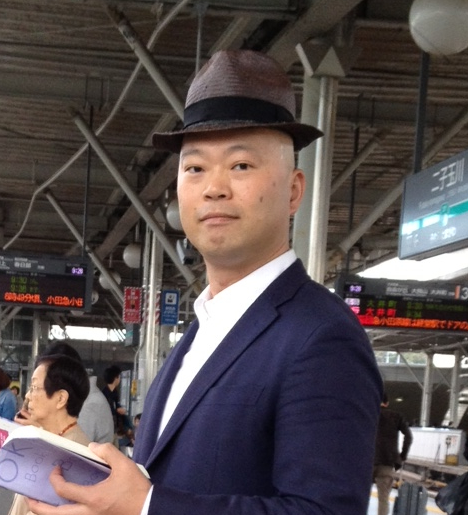 Isn't he cool? He looks like a very nice guy and is proud! Wonderful! 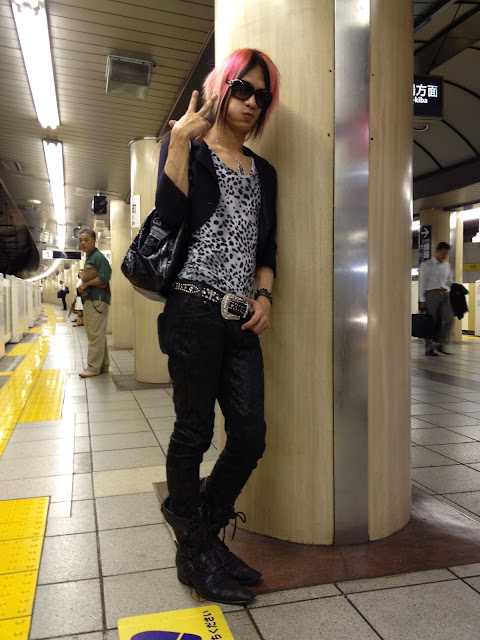 I saw this guy with his girlfriend and she was dressed like something out of a movie! But! She wouldn't let me take her picture (she is hiding behind the pillar). The guy was pretty cool, though and I think his style is pretty typical of what you can see anytime, anywhere in Tokyo today for the fashions of a 25 year old guy who is not a typical company employee. 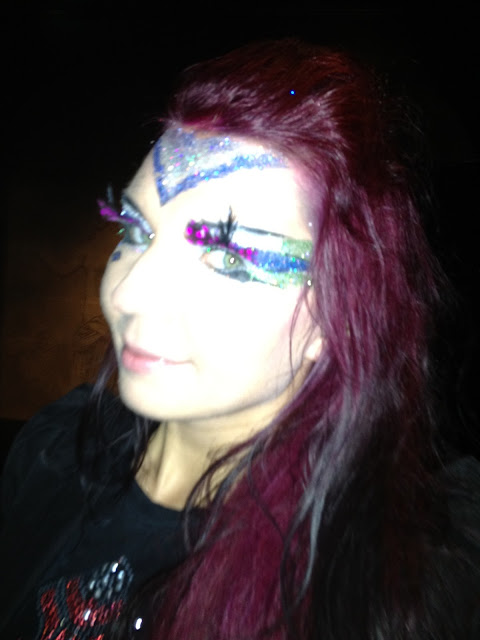 I saw this girl after the Miss Bikini Universe Japan Contest Thursday 10/4/12 she was standing by the exit door. The photo is not so good because it was extremely dark where I found her (and I don't like to use flash if I can avoid it) but I thought her makeup was quite interesting and unique so it was worth a photo. She looks totally Glam Rock... But, if you asked her, she probably doesn't even know what Glam Rock is! 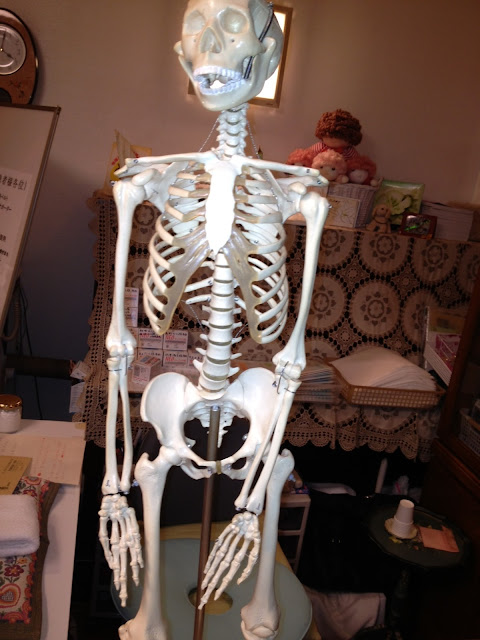 OK. This isn't exactly a picture of a person... But it used to be. I went to this acupuncturists house the other day and he had this standing in his living room, right in front of the piano. I suppose it could make an interesting conversation piece 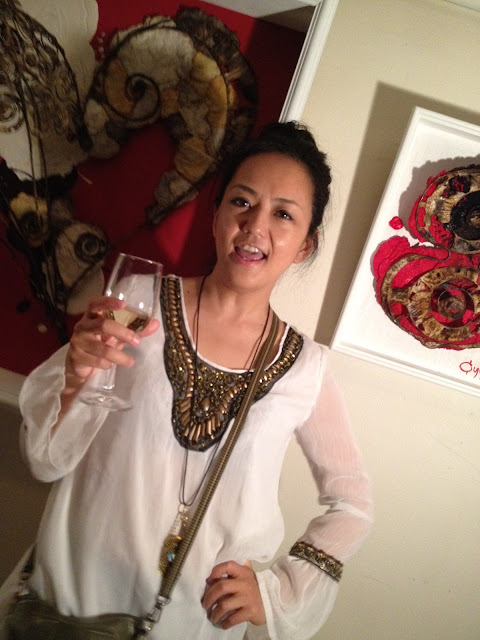 This is a photo of Ayumi Maeno an up-and-coming artist here in Tokyo. It was taken at her art exhibition on Saturday, September 15, 2012. Ayumi is quite photogenic and is making a sexy pose for the photo. 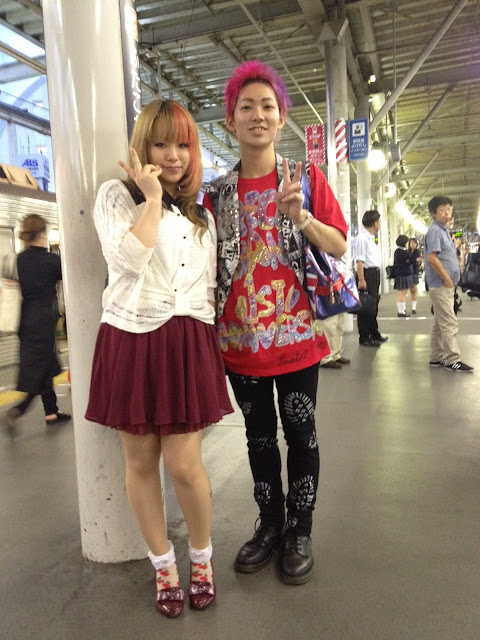 Finally, I saw these two at Futakotamagawa station just last week. I thought the guy's clothes were really cool and fashionable and the girl was cute. They make a great looking couple! The guy said he makes all his own fashions and coordinates them. Wow!

Futakotamaga is the station that I usually use. The couple above and Mr. Magoo were taken at that station so it just goes to show that you don't have to go far away to take great photos and see interesting people and things; they are all around us, in our very own neighborhoods... You just have to open your eyes and smile and say "Hi!"

Have a great weekend! 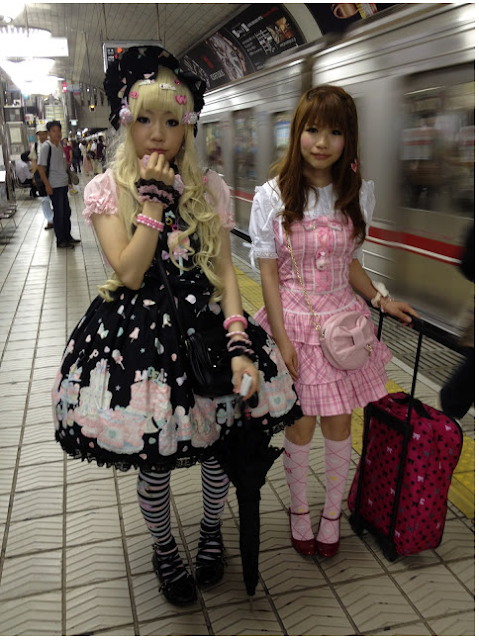 Also see "The Coolest Businessman in All of Japan! More Fruit Photos!"
at November 23, 2017

Very cool pics. I hope to one day have the courage to walk up to strangers and ask to take their picture. I suppose, worst case scenario, they just say "no".