The Russian Embassy, Vladimir Putin, Natasha and Me - Another True Story

So, it’s December 5, 2017. I get invited to a big film festival in Russia and the film festival is paying for ALL of my expenses! They are taking care of airfare from Japan, 5-Star Hotel, food, everything! Wow!....

In September, I went to Raindance Film Festival in London and met my hero Johnny Rotten, former lead vocalist of the Sex Pistols... Now, in December, I am going to Russia. Can I meet my other hero, Vladimir Putin, president of the Russian Federation? I think so. Yes!

My wife said, "That's crazy. You can't compare a punk like Johnny Rotten to Vladimir Putin, the president of Russia!" She's right, I suppose.

Johnny Rotten has been famous for 40 years!

First thought in my mind: "This must be some kind of trap!" 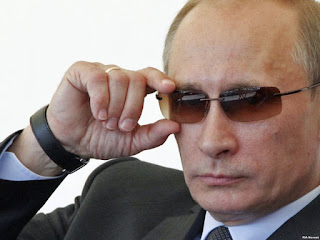 Really. Going to Russia is amazing. Going for free is like a dream come true.

But first, the hassles: I have to go jump through some hoops and get a visa at the Russian embassy... Of course, nothing is easy anymore.

I get everything ready as they instructed me to bring: invitation letter to film festival and Russian government approved visa code; copies of my airplane e-tickets, application code, passport, everything.

I go to the Russian embassy. On my way, I figure this could be a major pain in the ass, so I had better be nice to people. Since I'm going to a film festival because I made a film (of course I can act!) I figure I had better be in character and act like a nice guy and not a boisterous, loud, drunk and stupid troublemaking American tourist...

I lower my head, walk a little slower and remember that I am humbled to be alive and thankful to all...

Finally, I get to the Russian Embassy. The building reminds me of that movie "War of the Worlds." (You know the building the Morlocks had where they ate the humans? (The Eloy.) 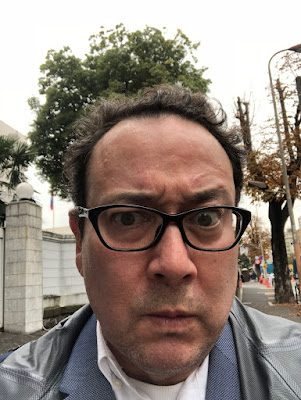 There are Japanese cops standing around the embassy everywhere. It’s 12:45 pm. The embassy is locked. The sign says they are closed for the day (at only 12:45!?) WTF????? 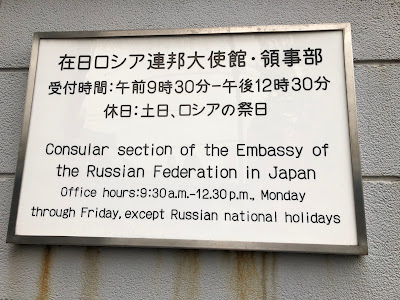 There's a hot young girl at the window. I call her 'Natasha' (not her real name).  I very politely say "Hello. Beautiful. Day isn't it? How are you?" I hand her my papers. 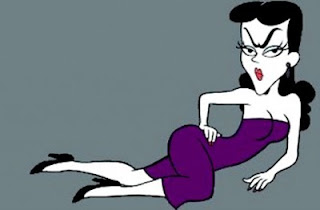 Imagine a blonde Natasha... OK? We're on the same page.

Natasha asks “How soon would you like your visa?”

She smirks derisively and shakes her head, “No. That's impossible.” (Wait! Was that a quick wink at me and at my humor? Maybe she likes me?)

“No. That is for Japanese nationals. Americans are $218,” she curtly responds.

“Do you take credit cards?” I ask.

Natasha (not her real name) smiles and sweetly says, “You can go to the ATM across the street.”

Slowly, in embarrassment, I sigh, “No. At my house, my wife is the boss and she handles all the money. I don’t even have a bank card.... She gives me a monthly allowance.” (That’s true. And about 80% of all households in Japan are that way and a reason divorce is low in this country. If guys don't have any money, they can't do so many stupid things.)

I take a deep breath and, in defeat, slowly gather up the papers. I lean towards Natasha and say, through the window....”It’s ok. I know it’s not your fault... I guess I can’t go to Russia this time... I don’t have enough money and I don't have enough time... My flight is Saturday... But, well...”

"What the f...? Just like that? She can decide to cut the price in half?" I'm now the one who is shocked.... But I figure I'd better stay in character.

Like old Bob Cratchit who just received a lump of coal from Ebeneezer Scrooge to give to Little Tim, I hold back the tears...I softly say, “Thank you!” to Natasha (not her real name).

She smiles ever so slightly and I pay the $108 dollar and whimper, "Thank you" several times over....

I pay and then scurry out of the room like a mouse. 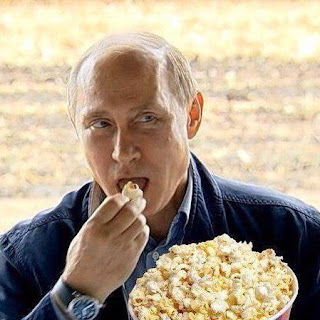 Of course, ve hold your passport and give it back to you after ve
insert tracking chip. Bwa! Ha! Ha!

I have to go back to the Russian Embassy to pick up my passport with visa stamp in a few days. But now I am ready to go to Russia and accept my film festival trophy for "Best Actor" in the real-life drama, "Dumb Ass Broke American Guy at Russian Embassy."

Thanks Natasha (not her real name!) See you in Sochi, Russia, Vladimir!

(Mike has artistic license to exaggerate.)

Wow... you don't seem to have any wrinkles. Japanese food supply is doing your body good.

Also, the US is even worse. Our passport officers aren't pretty like Natasha. No wonder Putin is popular despite all the bad stuff he does.

The US can't hire pretty people to oppress you because they are too busy spending money turning plants into surveillance devices.

Here in the US, politicians grope women and get elected (Trump). Other policitians support Neo-Nazis in the Ukraine (O-bomb-a, Killary, et. al.) and still are popular. No wonder why suicide is so high in the US. All the money is being spent on war and not on pretty passport officers to oppress you politely. I don't even have the freedom to choose my groper at the airport. (In the US, you have to be groped at the airport for the good of the nation. But, when Kevin Spacey does it for FREE w/o taxpayer money, it's illegal. Strange logic.)

Snowden left his life with a stripper in Hong Kong for Russia, so it must be lots more fun there. Have fun in Russia! (But, not too much. Your wife might be listening in on you through the trees outside the window.)