I'm in the territory formerly known as the Union of Soviet Socialist Republics, affectionately known as Soviet Russia; today? The Russian Federation.

I wake up early again just like every day. It is very cold. Is this all a dream? I am in the Russian Republic, captivated at a 5-Star hotel in Sochi Russia named "Отель Арфа-Парк." (That's Arfa Park Hotel for all you illiterates.) And there are beautiful women everywhere, and the food is free. I am here at the world famous "Sochi International Film Festival & Awards" event.

It is the best film festival in all of Russia! (https://www.facebook.com/SochiFilmAwards/) 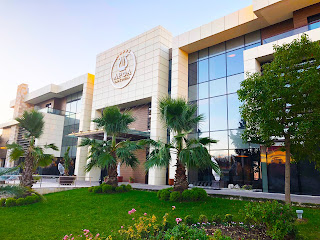 Oh, and did I say that the Arfa Park Hotel is a really nice luxury hotel?

On the way to some film screenings, yesterday, one of the Russian film directors asked how I liked Sochi. I said, "The people are friendly. Russia is really nice."

"Sochi isn't Russia. You need to go to Moscow." He said as he demonically laughed with his friends. I felt a tinge of danger in Moscow.... It must be different... Why? Because if I were sitting in my hotel here in Sochi, and you didn't tell me where I was, I couldn't really tell it apart from a top hotel in Hawaii, or Thailand, London or Tokyo. 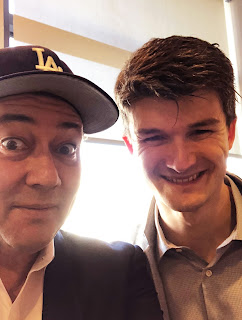 Yesterday, I sat and had dinner with four young Russians who live outside of Russia. I talked and ate with Tim (I think his real name is Timovenitch) and Yuri (Yuri is his real name) and Dennis (I won't even attempt to tell you what his real name is) and an awesome Russian babe named Larisa... (I'll try to get a picture of Larisa today... That is, if my smartphone doesn't melt while attempting to take her photo.)

These four people are all about 25 ~ 30-years-old. They are all extremely intelligent and fluent bi-linguals - two of them tri-linguals. As is often the case when meeting foreigners, for a moment, we talked the boring subject of politics.

After just a few minutes, I realized that these people were far and away much more knowledgeable (and realistic) than many of my Super-Hero comic-book reading, TV watching countrymen.

I was relieved and pleasantly surprised.

Later, I'd talk to my world-traveler, Jet-Setter American movie director friend Stephen David Brooks, who succinctly summed it up, "Yes. It would seem that the more one travels, the more the realization that people all over the world are basically the same. It's the governments that mess things up."

He's right. And that was the crux of the message from the young Russians who have traveled and now live in foreign countries.

EVIDENCE #1: Look at this photo: This is a photo of a red carpet cinema event for the Sochi Film Festival just like we have in Hollywood. But! With a huge difference. Just look at those two walking up there! We can't go to war with these people! In America, we have Disneyland and everything, but in Russia, they have the real fricking Snow White and Cinderella* living there! I wouldn't be surprised to find out that A.A. Milne's "Hundred Acre Wood" is actually named "Hundred Hectare People's Community Forest" and is really located somewhere near Kursk and that Winnie the Pooh actually holds a Russian passport and his real last name is Poohkovik! 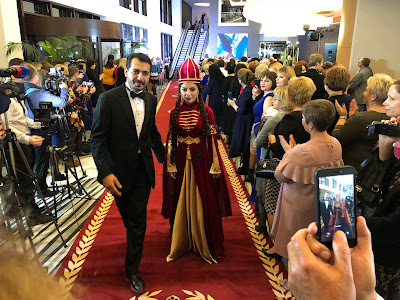 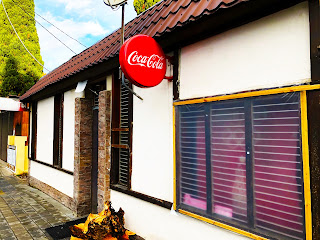 There are Coca-Cola signs everywhere here in Russia. This is at some little Mom and Pop owned diner down the street from the hotel. All the stores sell this stuff... Judging from that, the war was over a long time ago. 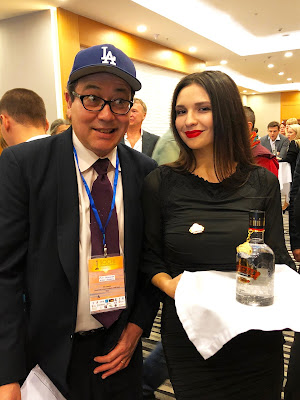 Basic reasons to never have a war with the Russians:

2) There are lots of hot babes.

3) They seem to be pretty tolerant of religion and I gather mostly Christians as I am seeing Christmas shit everywhere. 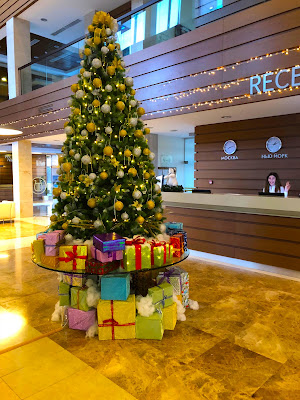 Christmas tree in hotel lobby. Cute girl waves from behind the counter.

4) They have, McDonald's, Burger King, Coca Cola as well as giant-assed Snickers bars, Kit Kat, M&Ms and all sorts of the same stuff we have. 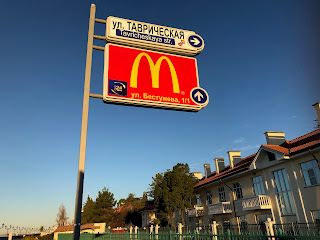 Yes. That's what you think it is.

5) They have gone Japan crazy too. They even have Karaoke. Yes. You read that correctly: THE RUSSIANS HAVE KARAOKE TOO!

6) Oh, and speaking of Christmas... Just another BIG reason we can never go to war with the Russian people and that they are just like us; Not only have they have imported all the things we love in the west: Junk food, junk culture and they have Christmas commercialism and giving presents too (or were they first?) But not only THAT, ladies and gentlemen, probably the worst thing that they ever imported from the west, and you'll be able to relate to the untold suffering this has brought upon those poor Russian brothers and sisters of ours, is that at Christmas, they have to suffer listening to that God-damned Wham song "Last Christmas" over and over just like we do!!!! Hell on earth.

My friends, we must make forever lasting peace with these good Russian people.... Not only do they eat Whoppers, Big Macs with fries, eat shit like Snickers bars and drink Coca-cola, they must endure listening to Wham every Christmas like we do in the west!!!!

We simply cannot make war on these wonderful people. They listen to Wham's "Last Christmas"!!!!??? Haven't we made these people suffer enough?

Russian beauty singing in front of a bar that offers Karaoke. She was so sweet and nice. Maybe I'll go there tonight and sing Russian Karaoke songs?

NOTE: Some of you alert readers might be saying, "Wait a minute! Mike mentioned Valdimir Putin in the title of this article!" Some might remember my post from last week: The Russian Embassy, Vladimir Putin, Natasha and Me - Another True Story (https://modernmarketingjapan.blogspot.ru/2017/12/the-russian-embassy-vladimir-putin.html)

"In September, I went to Raindance Film Festival in London and met my hero Johnny Rotten, former lead vocalist of the Sex Pistols...

Now, in December, I am going to Russia. Can I meet my other hero, Vladimir Putin, president of the Russian Federation? I think so. Yes!

My wife said, "That's crazy. You can't compare a punk like Johnny Rotten to Vladimir Putin, the president of Russia!"

She's right, I suppose. Johnny Rotten has been famous for 40 years!"

So, I have been trying to arrange to meet Putin every day since I've been here. I have even learned the phrase in Russian, "I want to meet Vladimir Putin." "Я хочу встретиться с Владимиром Путиным." (YA khochu vstretit'sya s Vladimirom Putinym.)

You probably won't believe me, but my friends who know me well will not be too surprised that I am walking around and saying to people I meet "I want to meet Vladimir Putin" (besides "Good morning" = "Doubra utroa.")

Some Russians laugh. Others just look at me funny.

BUT! Yesterday, one guy told me his best friend is a friend of Putin's... See? Now I am only two or three people away from meeting Vlad and drinking vodka shots with the dude for world peace!

I have 4 more days in Russia to meet Valdimir Putin....Destiny will not be denied!

POST NOTE: Just now, at breakfast, I asked some people if it were possible for me to drink vodka with the Russian Mafia. The security guys all seem like they could be mafia, but if they are, they are strangely missing tattoos. He told me, "No. They are not mafia. But they are all ex-KGB agents. The boss is a formerly high ranking Russian General who won one of Russia's highest military honors."

He pointed me to the guy.... Aha! So that's why he is wearing a suit with a giant red star medal on it!

I think I can go drinking vodka with these guys tonight. Now I know someone who has met or may even know know Putin personally... The trail grows warmer!

What did the Russians say of you LA baseball cap?

I have always loved Russian women... sexy and a bottle of vodka - absolute-ly!
I even learned about 100 conversational lines of Russian when I dated one... a dead ringer for Claudia Schiffer back in the mid 1990s... of course, the Russian invasion into Canada was new then, and I was very much single after getting stood up by my Japanese girl...
Sigh... I'm envious of your travels, Mike!