As some readers might know, I just came back from Sochi, Russia. I was there for the 2017 Sochi International Film Festival and Awards event. And what a fantastic event it was! The people were great! The movies were great! And the accommodations were fantastic!

I woke up with a hangover every single day.... Oh, the pain! 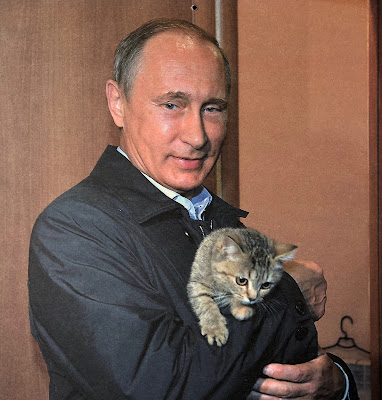 First off, Vlad's a nice guy and he even likes regular cats, not just man-eating tigers!


Everything was free! My airfare, hotel, food.... And drinks were free too!!!! I drank more vodka in six days in Sochi than I would ever drink in six lifetimes.

I woke up sleeping on the sofa in the hotel lobby, with no recollection of how I got there... Twice! Two times!

If I did that at home, my wife would have killed me.

Besides eating and drinking to excess every day and night, and watching cool movies, my main dream and mission was to drink vodka shots with Russian Federation president, Vladimir Putin.

I can say "Mission Accomplished!" Well, sort of.... Read on! 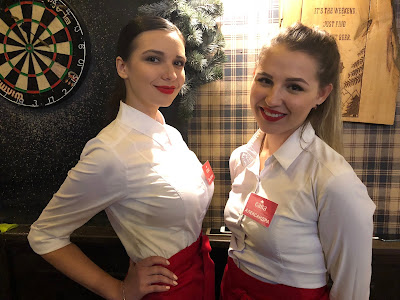 These two ladies were serving the food and adult beverages everywhere I went... Oh, and yes, all Russian girls look like this.


My first few days at the festival I spent all my time learning how to say, "I want to meet Vladimir Putin" to everyone I came across. Most laughed at me. When I realized that meeting Vlad might be a tad bit difficult (Hey Steven Seagal met him, why can't I?) I started asking people if I could drink with the Russian mafia. 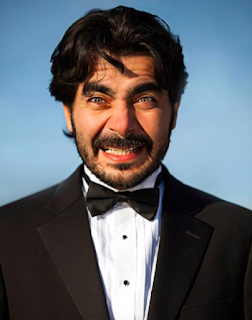 
I told my friend, well-known Russian Actor, Oleg Hill, if he could introduce me to the mafia. He leaned towards me and whispered, "I can't introduce you to the mafia, but see our security staff? They are all ex-KGB members. But, of course for you, my friend, I can arrange for you to drink vodka with ex-KGB members!"

It was true! I think. These ex-KGB guys were huge and they didn't talk much. Oleg pointed out to me an older guy who seemed like the boss of the ex-KGB guys and he wore a red star badge on his suit. Oleg pointed to him and said, "See that red star medallion on his suit? He is a friend of Putin's and was a very high ranking general in the KGB. He won that medal, the highest honor in Russia, during the war in Afghanistan." 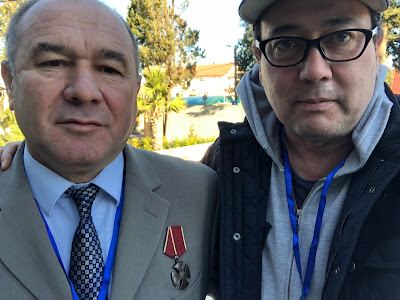 Photo of war veteran and highly decorated hero of the war in Afghanistan.
I tried to tell him I was honored to meet him, but he couldn't speak a word of English.
I also tried to not look at his missing arm.


I looked at the general and, indeed, he wore the bright red star medal proudly upon his chest. I also knew he was the boss because he was ordering around the rest of the ex-KGB guys constantly. Oleg added, "Notice how he always has his right hand in his suit pocket? That's because he lost his arm in the war."

Come to think of it, it was true. The guy always had his hand in his pocket! Poor guy! I guess he got his arm blown off destroying a terrorist base camp single-handedly with nothing but a Swiss Army knife clenched in between his gritted teeth. 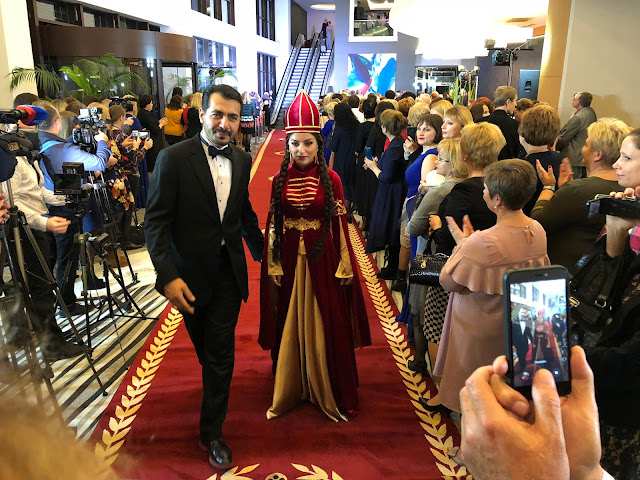 
I said, "OK, Oleg! Tell the ex-KGB guys I want to drink vodka shots with them." Oleg patted me on the back, winked and said, "Leave it to me, my friend." He then smiled at me and confidently walked off!

Oh joy! How many people can brag that they got trashed with the KGB? Not many, I'd reckon!

A few days passed and I never got the chance to drink with the KGB guys. Oleg would later tell me, "They are ex-KGB, they don't drink." 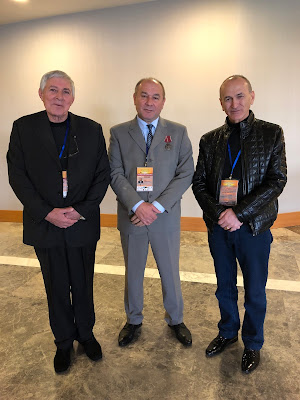 The general (in the middle) with some other famous Russian guys whose names I could never pronounce in a million years!


Later on, I'd meet the general one early morning and there he was waiting at the bus barking orders. I tried to talk to him and I shook his hand... I SHOOK HIS HAND!? Wait a minute! He had two arms! That Oleg told me a bunch of bullshit! I'll bet he told his friends, "That crazy American wants to drink with Putin or the KGB!"

I could imagine them howling with laughter at my expense. 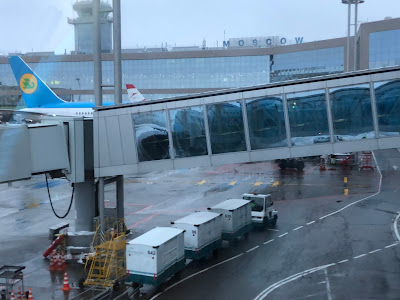 Moscow Airport. Yes, it was cold. Why do you ask?

Well, the days went by and I never met Putin, the Russian mafia, and I am not even sure those guys were ex-KGB! When I confronted Oleg about this and told him he lied to me about the general's missing arm, he laughed and said, "But, of course, my friend!"

Oleg and I would drink shots together several times... Each time to my regret and massive hangover the next day (everyday).

Upon the day of departure from Sochi, I realized that I had failed in my one mission in Russia: to drink with Vladimir Putin....

Defeated and dejected... With no photos of me and my pal Vlad, Vladimir Putin, I took the bus back to Sochi airport and then headed off to Moscow airport.

It was there, suddenly and to my total surprise, that the trail to Vladmir Putin suddenly grew hot. Hotter than I could ever imagine. For inside Moscow airport, I found Valdimir Putin merchandise on sale everywhere! Can you believe it? I guess the guy is sort of like some rock-star. You name it, they were selling it; Putin coffee cups, key chains, refrigerator magnets, T-shirts, etc, etc, and the Holy Grail of Valdimir Putin stuff: the 2018 Vladimir Putin calendar!

Putin calendars?! I had to have one, so I bought one. It was the last of only two at all the shops I could find at Moscow airport! Treasure!!!!

For your enjoyment, here are some select photos from inside the calendar! 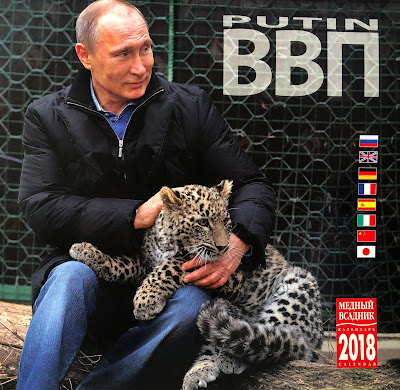 Cover of the 2018 Vladimir Putin catalogue. He pets tigers because, well, because he can. 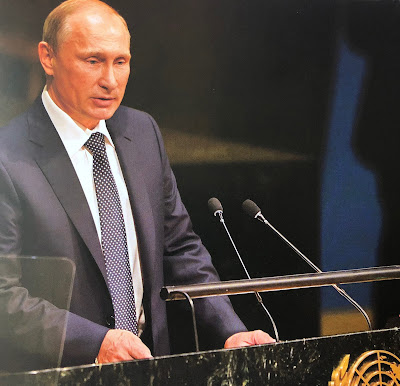 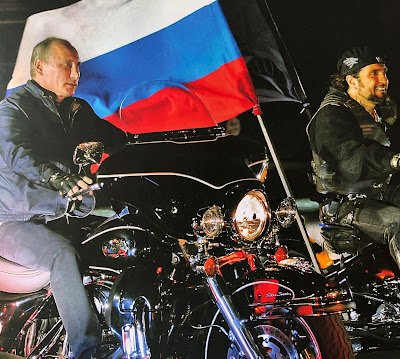 Born to be Vild, er I mean, Wild! Don't think that Vladimir is a big pussy. He rides bikes with the boys! Helmet? What? This is Russia! We don't need any stinking helmets! 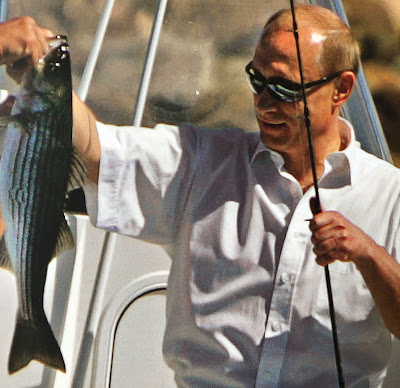 Hell yeah! The dude likes fishing. Anyone who likes to fish is OK in my book! Normally, when I go fishing, I wear a T-Shirt... Not Vlad, he has to be ready for nuclear war at any second, so he wears a dress shirt! 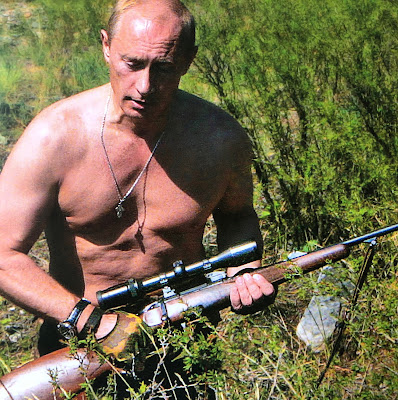 Vlad is also a macho hunter too! No shirt while hunting? Forget about nuclear war! Even the mosquitoes fear Vladimir! 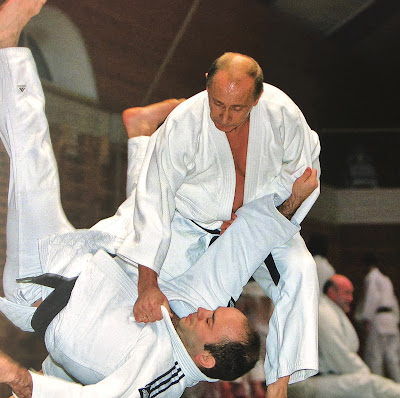 Don't mess with Vlad. He'll kick your ass! Here he is thrashing bozos with his karate moves! 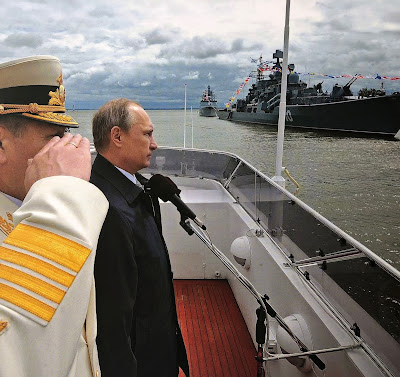 Of course, there's Vlad honoring the military too! I'll bet they even let him shoot the big guns on those ships for duck hunting....
Not much meat left on the duck though, after being hit by a 12-inch shell! 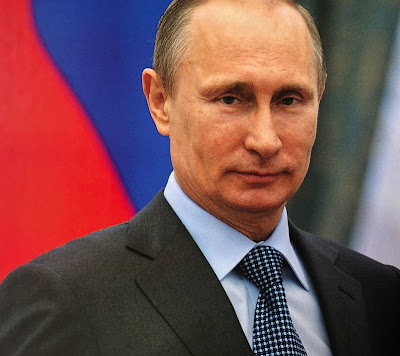 Finally, Vlad, just wants to show that he is an ordinary working man. The kind of guy that ladies would love to bring home to introduce to mom and dad.

I am so glad that I was able to find the 2018 Vladimir Putin calendar. It was only one of the last two.

I would later show my friend Kasia Madera of the BBC show "Newsday" my Vlad calendar and she just had to have one so I showed her where the last remaining copy was. Of course, she bought it.

Smart move, Kasia! No wonder you are on the BBC!

And now, as usual, dear reader will be complaining now about the title of this storied article: I Drank Coffee with Russian President Vladmir Putin - A True Story! Isn't true at all and I have no proof that I drank coffee with Vlad!

Oh, ye of little faith! I do find your lack of faith disturbing! 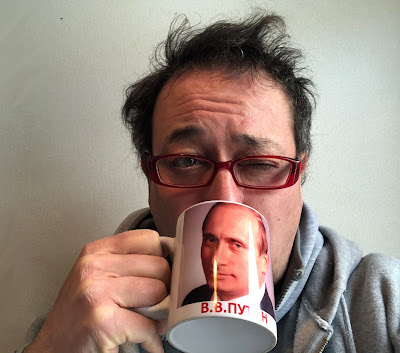 Extremely hung over drinking with Vlad...

Thanks to Vladimir Putin and thanks to my Russian friends in Sochi at the 2017 Sochi International Film Festival and Awards and my friends in Moscow!

The Russian Embassy, Vladimir Putin, Natasha and Me - Another True Story https://modernmarketingjapan.blogspot.jp/2017/12/the-russian-embassy-vladimir-putin.html

Here is the Facebook page for the Sochi International Film Festival and Awards. Go "Like" it: https://www.facebook.com/SochiFilmAwards/

Bwa-ha-ha-ha! You, my friend, are a weirdness magnet. So am I... weird stuff always follows me around... and it appears that it does with you.
I notice in your photo that you had your tongue inside Putin.
BTW: there's a Family Guy clip somewhere of Peter looking at the two types of women in Russia... the hot sexy ones you saw, and the babushka. If you can find it, you'll snort Putin out of your coffee-drinking nostrils.