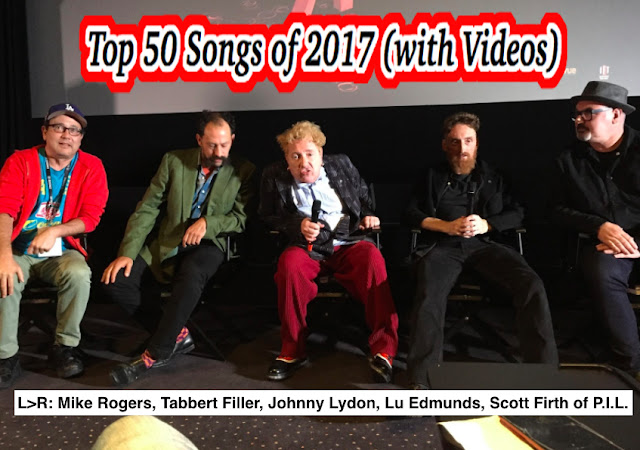 With the crew of the documentary film,"The Public Image is Rotten" at Raindance Film Festival, London, England.  Sept. 30, 2017.

These are my favorite songs and/or something from a favorite artist of the year. Now, some of these songs were not released in 2017... In fact, a few are several years old. But so what? I play alternative, underground stuff and it is my duty to bring new music to the fans, so this year was the first time I had heard some of these songs and it's my countdown, so there! Also, these songs were chosen by my iTunes software as the Top 50 artists I played from October, 1 2016 until Dec. 10, 2017....

2) Amyl and The Sniffers – 70’s Street Munchies  https://www.youtube.com/watch?v=uid_8u7T13Y
A young band that rocks and plays their own instruments? I'm in! Best female-fronted punk band since X-Ray Spex.

5 (TIE!) Richie Ramone - I Fix This  https://www.youtube.com/watch?v=Ows6w04lptw
This is the greatest Ramones song they never made! Richie Fucking Ramone! Cellophane!

https://www.youtube.com/watch?v=3t2mQeMt8NI
Peter118 is taking his exciting brand of pop-punk all over the world.

8) The Sold! And Bones – I’m Right, You’re Wrong (Official Video) https://www.youtube.com/watch?v=Z7JHhYKxm1Y
Legendary punk singer, Billy Bones of The Skulls, teams up with members of The Sold! to form a punk/blues explosion, The Sold! and Bones.

10) Touts - Bombscare
https://www.youtube.com/watch?v=DQmdoIhnizc
A three piece Punk band from Derry, Ireland. A singer that can't sing, a mod that can't play bass and a drummer that can't see.

11) The Van T’s – Bittersweet
https://www.youtube.com/watch?v=apAv_YL0C6A
Everything you ever wanted from a 90's dream.

13) The 50 Kaitenz - Vinyl Changed the World
https://www.youtube.com/watch?v=O84dX0O3Vl4
Japan's best punk band. They're from Osaka and are sometimes called the "Japanese Ramones." Nah! They're much more funny than the Ramones!

18) TAXI - Couch   https://www.youtube.com/watch?v=WPjmU6cEqTY
TAXI from Canada, leapt onto the pop scene in September 2017 and, since, has achieved number one on radio charts in the UK & Canada.

21) Ya Freshness – This is England
https://www.youtube.com/watch?v=acUlzDzx_XE
Hang on... this is a B side? QUALITY﻿!

22) Baby Shakes - Do What You Want
https://www.youtube.com/watch?v=pifkY_dLqYk&t
Winner's of New York's "Upcoming Band of the Year." Hot!

24) The Darts (US) – “The Cat’s Meow”
https://www.youtube.com/watch?v=YEli8nf7O6w
The Darts (US) romp through a grrrl-power trailer-park-mermaid-fairy-birthday party, complete with kiddie pool and pink cake.

26) Sloan Peterson - 105
https://www.youtube.com/watch?v=rbP2PUKDDj0
A love child of 50’s guitar pop and modern garage rock. Influenced by everything from Elvis, to Xavier Cugat or Nancy Sinatra and Bowie

36) The Coathangers – Go Away   https://www.youtube.com/watch?v=zltN5_JuUX4
The story goes that four young women from Atlanta Georgia, decided to start a band for the sole purpose of being able to hang out and play parties.

38) Cosmic Psychos – Fuckwit City
https://www.youtube.com/watch?v=Q954LxEzyY8
Australia's thirstiest rock band have got it into their heads to batter your earholes with more beer smashing tunes.

45) The Trash Templars – Dancing with the Bull
https://www.youtube.com/watch?v=tTjnaM-p1VM
After some very long Crusades, the Templars are back home with fully loaded Bags to bring the Holy Grail of Fuzz to the cheerin´ audience.

50) ED WOODS - Fuckin` Em All
https://www.youtube.com/watch?v=xzWvio5YprA
Link Wray is their father. Ed Wood is their Grandfather. Divine is their Mom. Big Foot is their Pet.

Thanks to Alex Kish, Kayla Williams, Dave McLean, Aya Fukuta, Ken Nishikawa and Rodney Bingenheimer (Rodney on the Roq), Gabbie Cabbie, Chris Browne, Christopher Jack, Marc Platt. You guys are the only people in the entire music industry who teach me music that I don't already know about. Really! Thanks so much.

You know what I learned from this list, Mike?
We could hang out and listen to the same music and neither one of us would bitch.
Why was the Richie Ramone song tied at #5? Then I listen to the ones placed above it. Blew my mind at midnight!
Thanks for posting these videos of these incredible musicians!

I Love LA - music is nice. that girl ,dances so sweet