I'm in Japan. We are the first country on the International Dateline, so while you folks are still living in the past, we are in the future here and it's already Jan. 1, 2018.

See? Japan is cool! But you already knew that. 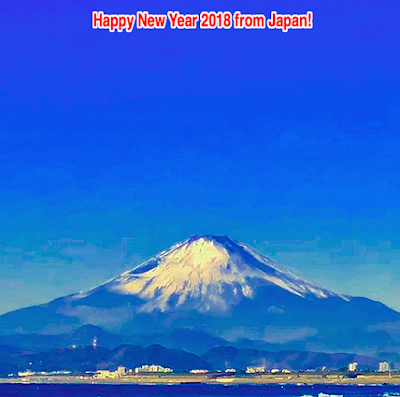 
Time for me, as your favorite sort-of-famous time-traveler person, who is already into the future, to waste yours and my time writing Random Thoughts, Notes and New Year's Resolutions for 2018. My scribbles from Japan on the morning of Jan. 1, 2018... While you folks are still living in the past! Bwa! Ha! Ha!

OK, so put your thinking caps on cause this stuff is going to get convoluted.

We must be ever more resolute in correcting the atrocious shit our peers write. Jeez Louise! Look at lots of this crap on Facebook or Social Media! What will the Chinese be thinking when they take us over and their English is better than 70% of our peers? I won't have it. So, we must redouble our efforts to teach people 3rd grade grammar so that, "there writing and grammar wont be so bad that they're sentences are unreadable and you're understanding is than incorrect."

You get the idea right?

Yesterday, I was drinking early (at home) to beat the crowds for New Year's holidays. I was tipsy and writing.* I put up a post I thought was controversial but funny. I figured everyone would get the joke.

This morning when I woke up, I realized that: I must be even more of a Grammar Nazi in 2018, even to myself. I'm usually pretty careful of this sort of thing because I try not to sound stupid as much (as little?) as possible. But I have to be ever (even?) more diligent this year.**

Last night I put a post of me (myself?) wearing my favorite new T-Shirt on Facebook. It is (was?) a T-Shirt with my drinking buddy, Russian President Vlad Putin on it. The T-shirt says, "My president" on it. ("Upon the T-shirt it is written?")

I wrote, "Vladimir Putin. My President! My favorite T-Shirt." I laughed and closed my PC and went to bed.

Oh lordy. I woke up this morning with 24 private messages and a bunch of other comments that seem to take the "My president" part seriously. People were warning me about being a Russian sympathizer; Putin is a bad guy, Donald Trump, blah, blah (they were serious too!).... I should have explained that the shirt says, "My president" in Cyrillic script (That's Russian alphabet for all you dumb illiterates out there.) I don't mean, "Putin is my president." I meant that's what the T-Shirt said.

My bad. I will be more diligent (diligenter?) from the new year. 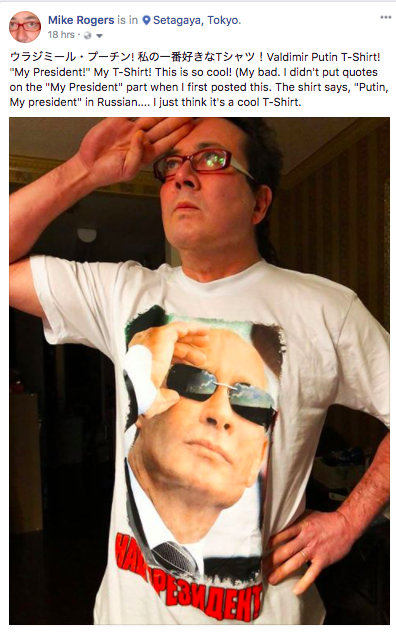 How often does this happen to you? You get shit-faced and then write some pissed off rant directed at everybody and their mother, then you awake the next morning and realize that you were a drunken asshole? Trust me, it happens far too often than I can remember (of course I can't remember, I was drunk!)

Of course, when drinking, it is difficult to control oneself so, either don't write when drinking or just don't drink when writing. OK? And, even more importantly, definitely DO NOT take your PC to a bar and drink with friends while making a business presentation!

Dammit! In March of 2017, I was at a bar and making a business presentation for my movie Ghostroads - A Japanese Rock n Roll Ghost Story (Trailer here: https://www.youtube.com/watch?v=hxwJ4AfzOwM) when my drunk friend stood up and knocked a full beer right on top of my MacBook Pro. No shit! The nearly full glass of beer was knocked over and suddenly the entire world was in slow motion... I watched helplessly as... The glass... The beer... Slowly... Spilling.... over my MacBook keyboard...

I was trapped in some sort of "Imobilo" ray that freezes it's victims into slow motion as I helplessly watched the flood flow across the keyboard of the PC..... MY PC!!!

I was frozen, unable to move as I watched my entire life washed away by beer on my MacBook Pro. It was worse than Katrina. Dammit! 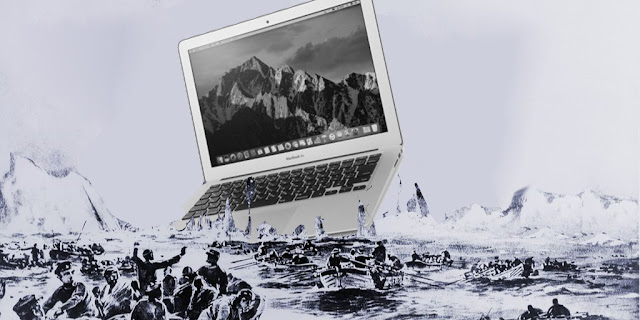 Artist's rendition of the great MacBook Pro disaster of 2017.

Resolution #4: Try to keep our mouths shut and not say so many stupid things.

In 2018, let's try to control ourselves and keep our mouths shut and not say so much stupid shit that no one really cares about. Nor should we pontificate to others about crap we know little about (and those people around care even less).

A quote attributed to Mark Twain should be a rule for 2018: "Better to remain silent and be thought a fool than to speak and to remove all doubt." (Actually, this quote is even older and appears in the bible from Proverbs 17:28: ”Even a fool is thought wise if he keeps silent, and discerning if he holds his tongue.”

Point: Keeping our mouths shut in 2018 is the best way to not be considered an idiot. Let us never forget this important point. 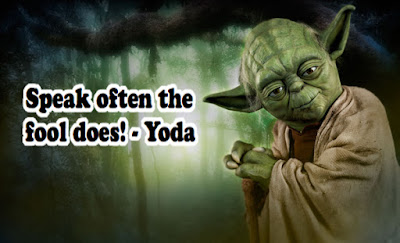 Resolution #6: In 2018, "Expect the Unexpectable." (apologies to Julien Poulson)

Some seriously weird stuff has happened to me right at the end of 2017. I am also expecting lots more weird shit to happen to everybody (ever see that movie, "The Truman Show"? Yeah? OK. We're on the same page.) So, as I say, "Expect the unexpectable."

Well, I wanted some snappy one-liners to end this article, but I ain't got any. I do have just some more random thoughts.

2017 was the year of Crypto-currency.

I believe that 2018 will truly be the Year of the Robot. Robots are going to start taking menial jobs (like at Burgerworld). So, if a robot is about to take that job at your local Burger-o-Rama, do not fear! Just remember the Laws of Hamburger Robotics:

It's the Hamburger Robot Code. Remember it.

Fear not the robot! 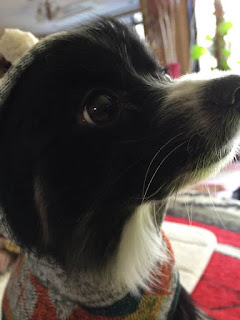