I have been told that this is the only place in the entire world where a McDonald's stands right next door to a Kentucky Fried Chicken. They are supposed to be enemies.

They don't normally open shop next to each other. But here they are.

It's a sort of like a North and South Korea Demilitarized Zone excepting with french fries and chicken nuggets. 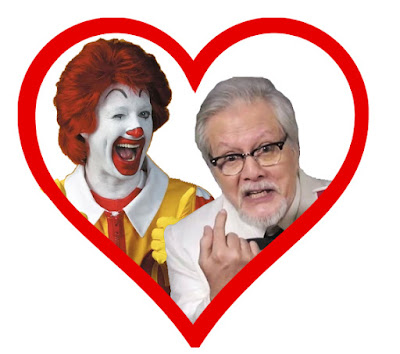 It is well known that the Colonel is fond of young spring chickens.

But, in a secret place in Japan, there they stand; A McDonalds shop open right next door to a KFC.

I have even been inside these places a few times over the last twenty-five years or so. Until recently, it seems that Ronald and the Colonel did get along quite well... Sometimes, over the years, I wondered if they didn't get along a tad bit too well...

Fraternizing with the enemy is treasonous and usually carries a penalty of death by firing squad.

So, I can understand Ronnie and Harlan wanting to be discreet. 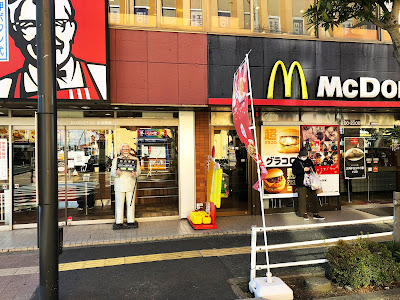 I hear this is the only place in the entire world where a McDonalds and a
Kentucky Fried Chicken stand next door to each other.
I'd tell you where this is, but don't wanna ruin the neighborhood with tourists!

Up until this year, it seems that the Colonel and Ronald had gotten along quite well in this corner of the world. They stood right next to each other smiling. I could imagine all the great chats they had with each other and the friendly bragging about whose lunch set was the best deal or whose breakfast buns were hottest...

At this special place in Japan, the McDonald's and The KFC, even shared the second-floor dining space so that a customer could walk from one restaurant's dining area to the other. Really! You could buy a burger while your friend bought a chicken sandwich and you could still eat at the same table upstairs where two worlds met.

It was a match made in heaven!

It was a truly unique place where the dreams of potatoes could fly with the dreams of MacShakes. Joji and Keiko could meet on the second floor and their love, as well as their appetites, could be satiated....

Of course, dear reader can imagine what other possibilities this offered Ronald and Harlan after dark when the shops had closed and the staff all gone home... And, with them, both Har and Ron (as they affectionately called each other) had to go back to their respective rooms... But wait! What about the connecting second-floor from one bedroom to the other, er, I mean, from one restaurant to the other?

I can't imagine that Harlan and Ronnie sat downstairs all night and watched the darkened cash registers... Who knows what sort of hijinks went on between those two at night?

Well, judging by what I saw today at these restaurants, there's a trouble in Fast Foodland. Instead of both Ronald and the Colonel standing side by side smiling, Ronald has his back turned away from the Colonel. It looks like Ronald is pissed off about something and no longer even wants to see the Colonel's face!

The Colonel, being much older and more experienced with tender meat, realizes that appearances are important and he doesn't want the neighbors to start rumors so he's taking it all in stride. 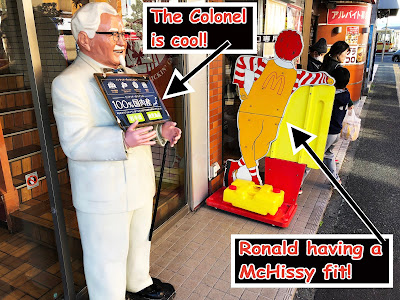 Ronald having a triple quarter-pound McHissy fit and acting like a poncy hairdresser.
I asked the Colonel what was going on, but he had no comment.

I wondered why there was trouble in paradise and so I tried to investigate.
I walked to the upstairs area and was shocked to see that the joined dining areas are no longer joined together. There's a dividing wall that has been built. These areas were connected for years! They were best friends!

They must have had one hellacious fight.

No more Keiko and Joji meeting for burgers and chicken after school; no more midnight escapades between Harland and Ronnie.

I walked across the street to ask my old friend Mister Donut if he knew what had happened, but Mister Donut had moved. He was gone. No forwarding address. No nothing!

We'll probably never find out what really happened between Ronald and the Colonel... Maybe it's best we don't. It is probably too late to repair hurt feelings and broken hearts anyway...

2018 has just begun and with it, the dreams and hopes of millions for a better world.

But, in this one corner of the world, in this tiny town of Japan, 2018 has brought about the first "Hollywood Divorce" of the year: Ronald McDonald and Colonel Sanders are no longer friends in Japan. In fact, Ronald doesn't even want to see his old buddy Colonel Sanders' face anymore.

Could the year start off any worse?

It makes me sick.. All this talk about McD's and KFC... It's enough to mess up my stomach.