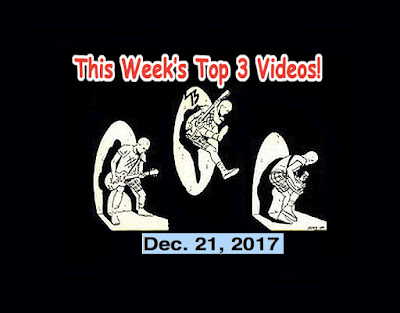 First off, I have to say sorry for missing last week's countdown. I think that was the first countdown I missed since Sept. 2014 when was in the hospital! Last week, I was in Russia and I couldn't access the regular page where I post these countdowns. I thought there was something wrong with my Wi-Fi in Russia, but it seems the site had been down since at least last Saturday. They are trying to fix it now. So, very sorry about that.

First up are three guys from Watford, England who were first introduced to us by the Biscuit Boys, Gabbie and Chris (thanks guys!) the band is known as the Spitfires. Their bio says: "Taking influences from The Clash, Billy Bragg, The Jam through to Soul, Reggae and Ska - the band have released 2 albums since 2015... Their work ethic and powerful song-writing mixed with their acute social commentary and lack of mainstream industry support has made this fiercely independent band one of the most popular underground success stories in the UK today. This DIY attitude and independent spirit has earned them a dedicated following and sold out shows across the whole of the UK and Europe."

#3) The Spitfires - Over And Over Again  https://www.youtube.com/watch?v=jZuN17MwMzs&sns=fb

At #2 is a song that is performed by Starbenders which is one of the most exciting new acts of 2017! This is their second time on our countdown! Their bio states: "Hailing from Atlanta, GA, Starbenders are the half way home for misunderstood misfits, fringers and glam punks. Front-woman, Kimi Shelter and her gang have concocted a perfect alchemic blend of androgynous rock and roll power with "stuck in your brain" pop melodies. Imagine David Bowie playing 7 minutes in heaven with Debbie Harry."

At this week's #1 is a band that I debuted on Japanese FM radio a LONG time ago, Starcrawler! This is their 4th or 5th time on our countdown! Their bio says, "We will kill you." So what more could you ask?

Spotlight Artist!  Today’s spotlight artists are a "Wild 60's Beat" trio from Tokyo, Japan named, The Minnesota Voodoo Men. They were introduced to us by rock star, Mario Cuzic in the legendary movie about Japanese Garage Rock: Garage Rockin' Craze (see trailer here: https://www.youtube.com/watch?v=FNukfLBvALc)
Their bio says: "The Minnesota Voodoo Men formed in Tachikawa Near Fussa ( The capital of garage rock/group sound in Japan ) in 1998. Typical story, Ringo met Fabian while playing live at his art school. Fabian was the local guitar Madman & since Ringo played bass and had similar tastes in music they decided to form a band and got onboard, another wild man, Bamboo on drums. They started by honoring their idols samurai style and mostly did covers of 60's garage, surf & British beat with a few originals playing the tokyo/fussa underground garage scene while getting profusely inebriated and getting what “all” rockers start bands for: PUSSY.

Of course, The Minnesota Voodoo Men have a Facebook page:
https://www.facebook.com/The-Minnesota-Voodoo-Men-246602626236/

Spotlight Artist! Minnesota Voodoo Men - I Want You to Get Excited  https://www.youtube.com/watch?v=BDSBHuQi8FM