Welcome back to another episode of Cool & Strange Music for June 20, 2017! 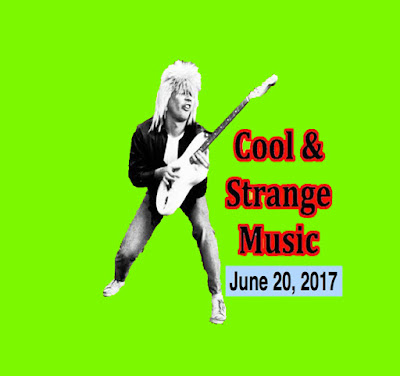 Once again, it's time for our monthly dose of Cool & Strange Music.

Today I have a real variety of stuff for you... From Japan to the Super-Cool and the outright bizarre.

First up, let is take a trip to Japan and I do mean, "trip." The first song today was arranged by NHK. NHK is Japan's government run national TV station. I doubt I've had much good to say about them in the past (I don't know why the government taxes us to run a TV station - is this North Korea?)... NHK (like all TV) is bleeding audience, especially younger people. So they seem to have propped up a new company called "NHK Blends" whereby they take some of those tax monies and spend it on new projects. NHK Blends is described as: "A musical mix: East meets West." OK? Well, I do think the NHK Blends Youtube site is kinda cool.... Check it out. (NHK Blends Youtube: https://www.youtube.com/channel/UCUpWgbZCNH1bi7Zec_7tfNQ)

It's called, "Cool & Strange Music" for a good reason; some of the songs are really cool, like the Led Zeppelin cover above, and others... Well, there's "Strange" and then there's "WTF? Strange." The next song falls into the latter category. This is one of those, "Is this for real?" This time it's the Miami Dade Country Police Department wasting your tax monies on this video.

WARNING! Once you've clicked on the link below, you can never un-see what you have seen.

Oh, my god!!!! If you were able to watch that entire video above, then give yourself 100 points and go ahead, go take a shower now... We'll wait.

Finally, at #1 is Pinksideofthemoon featuring Lee Popa and Jolee. Their description of this video says, "Weather permitting, skygazers in America and Europe are in for a treat in the early morning hours of Tuesday, when the first total lunar eclipse in almost three years is poised to turn the moon pink   it was the first night of us recording music together we were watching a lunar eclipse and for a split second the moon turned a bright pink we had no choice we became the pinksideofthemoon." Check out their Facebook page:
https://www.facebook.com/Pinksideofthemoon-110587222355798/

Well, that’s it for today! Hope you have a great rest of the week and hope you stay Cool and Strange!
See more Cool & Strange Music countdowns here:
http://robot55.jp/?s=cool+%26+strange+music

And if you like new music and alternative artists check out the weekly Top 3 here:
http://robot55.jp/?s=Top+3+videos