US Gold Medalist Cynically Cashes in for McDonald's: More Crass Commercialism at the Olympics!

I'm shocked! Shocked I tell you to see the height of cynicism and crass commercialism at the Olympics! Shocked! 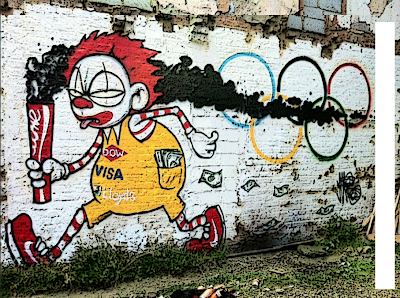 Today, there is a story that perfectly focuses on Olympic cynicism and grotesque commercialism that I'd like to share with you. This is such blatant commercialism and cashing in that I can't believe that more people don't immediately recognize it for what it is.... Of course, the mass media won't say anything... They WANT you to buy McDonald's and poison yourselves... After all, if McDonald's does well, the mass media keeps an advertising sponsor...


Line up for the slaughter you people-cows.... Read on...


I've placed a few posts about how the Olympics are just a scam and just another way the government rips the people off to line the pockets of their corporate friends and donors to their political aspirations....


The Olympics are nothing of the sort. They are big business. They use nationalism and tribalism to sell you product... And the government allows them to take your tax money to build facilities that put the taxpayer and their children and their children's children on the hook for payments for decades! The worst part of it all is that many people actually go out and cheer this madness and thin this is some sort or charity promoting goodwill amongst nations! Extraordinary!


Please refer Bread and Circuses: Olympic Games are a Scam to Take Yours and Your Children's Money Away!


They say the Olympics are a massive money making opportunity. They are for land developers, real estate agents, advertising agencies, the IOC, etc. For you? They stick you with a massive tax bill. For example, the Vancouver Olympics was such a massive burden and loss of public monies that the citizens of Vancouver and their children will be paying the bill for the next 30 years.

Also, in Banzai 7 Goes to the Fraud-Lympics in London I made a very cynical stab at professional Olympic athletes doing what they do for money and not for love of country:

Question: When that athlete crosses the finish line first for Olympic gold what is the first thing that come into their mind?

A: "I did it for my country and people who I don't even know and will never ever meet."

B: "Alright! Now I get that juicy sports sponsor contract and millions of dollars... I'm rich!"


A few good folks took umbrage at that comment, but I stand by it... Especially since I am speaking of USA athletes... And lookie at what we have here!

Ricky Berens shares a photo of the massive 3,330-calorie meal he ordered to celebrate a gold medal.


Yeah, right. An athlete wins the gold medal and then he celebrates by eating at McDonald's?! Oh, yes. I believe that. I think the last time I went to a celebrating where the person being celebrated wanted to go to McDonald's was when my son was in kindergarten and his friend celebrated their birthday party at McDonald's!


What could possibly be the reason for this? What's that you say? McDonald's is a sponsor of the Olympics? Really? What a coincidence... I wonder if our star athlete smells a juicy contract with McDonald's after the Olympics?


Nah... They'd never do that, right? This couldn't have been pre-planned!?


But wait a minute again! There's a photo of the athlete's McDonald's meal (taken on a crap camera) yet it says, "Copyright Ricky Berens." (It has his copyright mark on the bottom left!) Say it ain't so, Joe! That means that when our star athlete was taking the picture, he was already thinking of getting royalties for the photo! Brilliant!


Of course he did! He, like all Olympic athletes do what they do for money... Joe-blow average dumb sports fan stands there cheering all the while he is getting raped and doesn't even realize it. 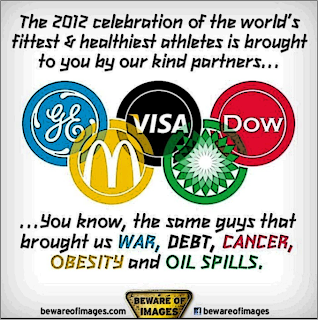 Copyright of the athlete on the McD's photo? Okay... that's a marketing machine.
While I agree that it may seem unusual for anyone to celebrate a Gold Medal by powering down at McDonald's - BUT - many athletes restrict their diet and have been craving something for the weeks leading up to an event... this dude MAY have craved the golden arches.
It's possible and even likely... but that copyright thing kind of blows that out of the water.
Love the graffiti image!
Leave it Canada to lose money on the Olympics. We lost big time in 1976 in Montreal. We may have lost in Calgary in the 80s (Winter) and we did lose again in Vancouver - didn't know that... everyone else makes money... though I am sure Greece took it up the butt Greek style... probably had something to do with their collapse...
Again... I have no problem with athletes capitalizing ion on their fame. It's fleeting... and I know that it is done to perfection in the US. I recall Cdn Gold medal winners getting a commercial for Oreda french fries or some other ridiculous ad... no money there. Ben Johnson stuttered so nothing for him... though he does do ads for Cheetah... a sports drink. Yes.. Cheetah.

Let me guess: You met a number of Olympic athletes eating at posh restaurants. They were probably discussing endorsement deals with entertainment lawyers. You almost lost your appetite watching these sellouts ready to promote diabetes, etc. Good for you for showing how these amateurs have pro envy.