The Russian punk band Pussy Riot have been sentenced to prison for two years. The western media are in arms.

Even Amnesty International wants to cash in on the act:

"We are outraged that a Russian court found 3 members of Pussy Riot guilty of "hooliganism" today for singing a 30 second protest song and sentenced to 2 years imprisonment in a penal colony! SHARE this image to stand in solidarity with Masha, Katia and Nadia..." 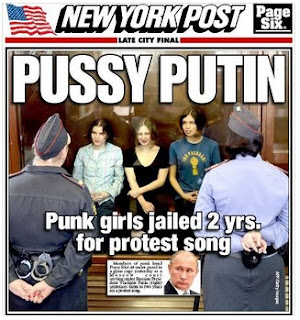 That's not true at all. The members of Pussy Riot were not sent to jail for "singing a 30 second protest song." Not only is Amnesty USA guilty of lying, they are morons to boot. (As if Putin has so much free time on his hands he is concerned about a bunch of hooligans crashing a church ceremony!)

That's "morons," as in "idiots" and that includes Amnesty International, the band Pussy Riot, the western media and the western public who thinks this is a travesty of justice.

Despite the "Spin," Pussy Riot weren't convicted of "speech crimes" or singing a song....The band, Pussy Riot, were convicted of breaking and entering, trespassing, assault, resisting arrest, assaulting a police officer, TERRORISM!, threatening people with violence and a a handful of other charges...(AND, to make matters worse, this was their second offense!) - the 1st time they got off with a fine and a warning from the judge that if they pull this kind of sh*t again, they'll go to jail! (follow the links here for a more in-depth story on Pussy Riot). http://poorrichards-blog.blogspot.jp/2012/08/russias-pussy-riot-stunt-supported-by.html?m=1

And, then they go do it again!

Don't you think for one second the courts - in any country - don't enjoy making an example out of people like this?

If you did this in the USA, you wouldn't go to jail, would you? Nah. Probably not. In the USA the cops probably would beat your ass to a pulp and then shoot and kill you....

I've been a follower of this band for a long time - before anyone here had ever heard of them... This was a foolish gamble and they lost.

Don't be fooled by US propaganda.

Also, please consider; isn't the timing of this suspicious? Think about Syria and the Russian connection here....

The western media complain that because this is Russia, then that's why there's no freedom of speech!!? Don't make me scoff!

America hasn't a leg to stand on when it comes to complaining about "lack of freedom" in any other country.

Imagine this: You and your friends put on a ski masks and run into a church on Sunday downtown in downtown, Boonf*ck Iowa, during a congregation....

Then you shove your way onto the stage and then start screaming and insulting the 70 year olds attending.... Then the church people (nuns and the well-known muscle-bound clergymen) try to get you to leave. You threaten them and refuse.

Then you and your genius friends take over the church services and set up your  guitars and start playing loud music. You then shout political and social revolutionary slogans and insult and threaten the audience with violence; you continue to insult the church-goers and guests (Gee, if you were a church guest, might you not think this is a terrorist take over (ski masks?!) and be frightened out of your sh*t?)

Then the cops come in a SWAT type of vehicle and there's a massive ruckus...

Then you and your rocket scientist friends fight with the cops who drag your asses outta there all the while you scream and shout some insane rantings about "Free Pussy!"

Sure. Sure. The only thing that is irrelevant is the function of the logical thinking capacity of people who think this is a travesty of justice and who think they wouldn't go to jail or prison in the west for the exact same stunt....

Hell, in many places, you'd have your ass in prison or an insane asylum for more than just two years. Hell in some places in the USA, a drunk driving conviction is 7 years in jail!

The people who think this is a travesty would make shit-assed band managers and promoters and deserve jail time for this sort of thing or, better yet, deserve getting their ass sued in court (by the girls in Pussy Riot for shitty advice by the way!) for pulling a stunt like this.

This stunt ends the career of Pussy Riot....

A promotional stunt that ends their career? Wow!

Sure. Russia is a terrible place because they have no freedom....

As if it wouldn't be worse for these dumb girls in the west.

More on "Who is Pussy Riot."

Also: "...the case of the Pussy Riot prosecution in Russia which is very much in line, or even less severe, than what is considered the norm in most western countries (check this excellent and detailed legal analysis by Alexander Mercouris for more info).... The sad truth is that the West's support for Pussy Riot is, in reality, nothing more than yet another expression of its rabid hatred for anything Russian or Russian Orthodox.  And if that means erecting a small group of sexually dysfunctional women into a banner for freedom, so be it!  And that if that also means looking away from the obscene and outrageous persecution of a real hero for freedom like Julian Assange by the US Empire and its vassals - then so be it also!" http://www.informationclearinghouse.info/article32225.htm#.UDDsvgnT1c0.facebook


Thanks to Glenn Williams. Glenn is a longtime music industry professional from the UK with over 30 in the business.

who is glenn williams and where did he get his "facts"?

Dear Anonymous,
"Where did he get his facts"? The details of what these girls did are caught on video tape and have been reported all over the internet. Try to read instead of swallowing the Kool-aide and following the crowd before thinking. There are links in this post too.

um, i'm sorry, but you added the info on glenn williams and added a few links to the blog AFTER i asked my question. i think we're both following the crowd. just different ones. anyway, you're welcome.

Hardly Anonymous. I doubt that you'd call a person who played Pussy Riot on national Japanese FM radio as far back as Feb. 28, 2012 and placed them on a Top 5 video chart in Japan on March 3, 2012 a "follower." Keep that title for yourself.

I posted the links AFTER your questions because:
1) You obviously didn't do your own research and;
2) Those links came out more than 24 hours AFTER my original post.

My post beat them all. I suppose you'd call that a "follower" too? Thanks.