OK. So I do this nationally broadcast FM radio show called, "6 O'Clock Yatsura" which roughly translates into, "Those guys at 6 O'Clock."

I started a new corner on the show (in keeping with the title "6 O'Clock Yatsura") called "6 O'Clock Hitler." Because, as everyone knows the two keywords to always say on any radio show to increase ratings are: "Sex" and "Hitler."

No? Ok, well you gotta speak Japanese to get the joke (they sound alike)...


A new book has revealed that during the Second World War British forces came up with the idea of sneaking estrogen - the female sex hormone - into Hitler’s food to make him less aggressive.

The book - written by Professor Brian Ford - claims that British spies came up with the idea as the war seemed to be heading towards a stalemate.

Chosen for its tasteless properties, it was hoped that the estrogen would slowly take effect - calming the Fuhrer and making him more like his secretary.

The book also outlines other genius Nazi-beating plots such as dropping glue on troops to make them stick to the ground and disguising bombs as tins of fruit. 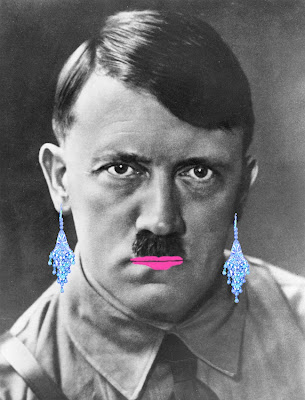 Shit! Of course, you knew that already! Here's an even more bizarre Hitler story:
There are some weird houses around the world, but there is a house in England (of course) that looks exactly like Hitler! .Is this a picture of a Swansea house? Or is it a portrait of former Nazi leader Adolf Hitler? It's almost impossible to tell the difference!
That's what Charli Dickenson thought when she posted a picture of the property on Twitter, commenting 'I've found Hitler reincarnated'.
The snap was subsequently re-tweeted by comedian Jimmy Carr, who obviously agreed with the Fuhrer connection. 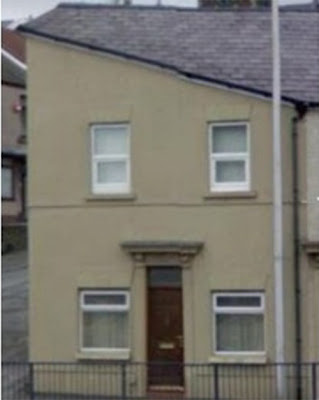 Do you know any houses that look like evil dictators? If so, please get in touch...

Thanks to Student Beans for finally educating our fricking dimwit university students on something important that they can use in life.
at August 29, 2012