Time is Running Out! Buy Silver & Protect Yourself & Your Family!

(UPDATE BELOW)
I've been telling people to buy silver since 2008 when it was about $11.40 (USD) an ounce. I've been reporting on where the best place to buy precious metals is in Tokyo. Gold in Tokyo is here. Silver one ounce coins are cheaper overseas here. The best place to buy large amounts of silver in Japan (32 kg. bars) is here at Tanaka. (Do not buy gold at Tanaka! Their margin on gold is too high - they are good for large amounts of silver only!)


Anyway, once again, the price of silver is skyrocketing. Hi Yo Silver! Away!


The Financial Times reports that sales are so brisk and demand is so high in some places that rationing has begun. This massive demand can only cause the price to go up even more!


Silver jumped to a 30-year high amid record levels of investor buying that has drained mints of silver coins.


The price of the precious metal hit $31.37 a troy ounce on Thursday, up 16 per cent since mid-January and the highest since March 1980. The world’s leading mints have reported record sales of silver coins in January and some, including the Royal Canadian Mint and Austrian Mint, have had to ration sales.

“We have sold everything we can produce in silver and have demand for at least twice that volume,” said David Madge, head of bullion sales at the Royal Canadian Mint, which produces the silver Maple Leaf coin. Silver coin sales at the US Mint and the Austrian Mint also hit record levels in January.


The surge of buying has both boosted silver prices and helped push the market into “backwardation” – an unusual condition in which forward prices are lower than prices for immediate delivery. While investors are buying, miners have been selling their future silver production to lock in gains, which has depressed long-dated futures prices.

Silver has much higher to go folks. In 1979, the price of silver jumped from $6/oz to an all-time record high of $48.70/oz. Adjusted for inflation, silver today should be at about $150 USD an ounce. 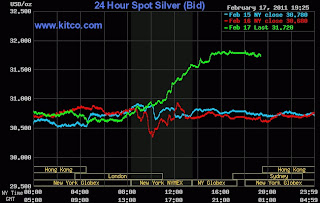 Silver price as of Feb. 17, 2011 at 19:25 NY time.
Silver at less than $50 an ounce is still a steal. And, if the Japanese Yen collapses like many people are predicting, we could see the price of silver in Japan go up like Chinese fireworks at a Hong Kong New Year's!


A good friend of mine told me the other day, "Mike, I remember when you told me two years ago or so to buy silver when it was at $13 (USD) I should have listened to you." Yep. he should have. I'm sure, though, he still isn't.


What are you waiting for? 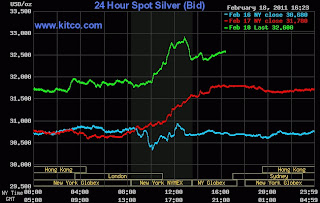