I've written before somewhere how it's so easy to meet the rich and famous in Japan. It happens all the time here. It happened to me again twice in the last three days. Please refer to: Meeting the Rich and Famous in Japan? No Problem!

Since I've been in Japan, I've met many extremely famous people, multi-millionaires and world famous politicians... Just to name a few...

I've met Richard Branson, George H. W. Bush (Daddy Bush), Yoko Ono, Elvis Costello, Siouxsie Sioux (not well known by most, but I am a big fan), at least 7 Japanese Prime Ministers and a bunch of other countries prime ministers - so many - that I can't remember. Along with the some many others that I've met who I can't remember either.

If you want to see photographic proof of some of those, go to this link. 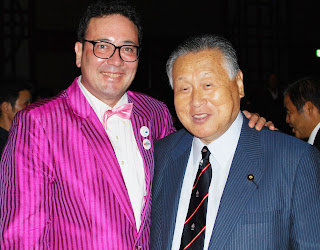 Remember Prime Minister Mori? He was the one who went to the US and met then US president Clinton. Mori messed up his English and tried to say, "How are you?" but, instead said, "Who are you?" To which Clinton said, "I'm Hilary's husband." Mori then replied, "Me too!"

Funnily enough, some friends who have lived here for years asked me how it is possible that I pull this off every time and get my photo with these famous people? So now, lucky you, "chaser of the stars"! I'm going to share my secrets! And it's all for free! Today's blog post is how you can meet the rich and famous in Japan and get your photo taken with them each and every time.


It's all so simple.

First off, let me show you my latest trophy. This is a photo with me and Beat Takeshi taken on Friday night, September 30, 2011 at Tennozu. Beat Takeshi is arguably the most famous Japanese in the world. 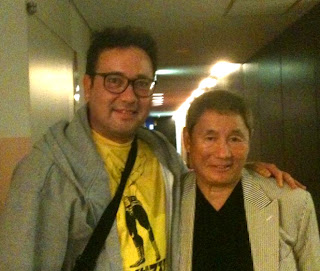 Takeshi Kitano (北野 武 Kitano Takeshi, born January 18, 1947) is a Japanese filmmaker, comedian, singer, actor, tap dancer, film editor, presenter, screenwriter, author, poet, painter, and one-time video game designer who has received critical acclaim, both in his native Japan and abroad, for his highly idiosyncratic cinematic work. The famed Japanese film critic Nagaharu Yodogawa once dubbed him "the true successor" to influential filmmaker Akira Kurosawa. With the exception of his works as a film director, he is known almost exclusively by the name Beat Takeshi.

It's not the first time I've seen Beat Takeshi at Tennozu. The first time I saw him I didn't expect it so I didn't have my camera ready. I knew, if it happened again, I would make sure my iPhone camera was on and ready to go.

I've shown this photo with me and Beat Takeshi to many friends and they were all blown away. This photo was even shown to many who work in the same building where this photo was taken (TV Tokyo Tennozu Bldg.). I think Beat Takeshi shoots some sort of comedy show there sometimes. Even those who have seen him from a distance and even work there are so much in awe of the guy, they would never in a million years ask to take a photo together. Me? Nah! Not me. You only live once, gotta go for the gusto!


I say invite the guy over for a Happoshu! (cheap beer)

But back to the story: How to take photos with people like this? Well, actually, even though he is probably the most famous Japanese in the world, appearing in TV and movies over decades, a person like Beat Takeshi is one of the easier people to take photos with. Seriously.

Why? Well, bear with me for a minute here, it's a tad bit complicated....

Beat Takeshi, like most Japanese, cannot speak English as well as he should.


I say, "as well as he should" because, I mean, after all, Beat Takeshi's photo is on every train in Japan advertising an English school for Japanese. Think about that! I guess that about 100 million people see his face everyday going to school, work, shopping or just riding the train to where ever it is they want to go.

Before I go on, let me tell you that I am a big fan of Beat Takeshi. He is one of the funniest guys in the world, I think. He also directs great movies. He won the Best Director and Film Award at the Venice Film Festival in 2003 for Zatoichi... Beat Takeshi is no slouch.


Anyway, like I said, Beat Takeshi is everywhere in Japan. He is a hero. He is super-popular. The guy makes millions and millions of dollars doing what he wants. He lives the life we all only dream of... And, like I said, his face is on posters everywhere for an English school in Japan. 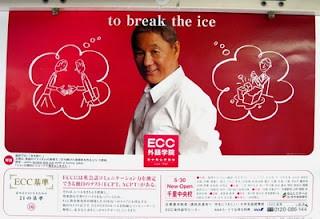 
Think about it! He has a public persona to keep up. He is raking in mega-bucks doing ad for an English school. He has to keep up appearances. You want to take your photo with him? THEN HELP HIM TO KEEP UP THOSE APPEARANCES!!!! Walk up to him and start speaking English to him just like you would to a native English speaker! While the rest of the Japanese are standing around thinking, "What did this guy just say?" It gives him the chance to hold a conversation with a REAL foreigner, in front of everyone, and impress upon them that he CAN actually speak English.


This allows him to feel good!


The conversation with Beat Takeshi the other day went like this:


Speaking very quickly in friendly and normal tones of voice (like you are meeting an old friend again after all these years), you exclaim, "Hey! Wow! I can't believe it! Beat Takeshi. Wow! I love your work! I can't believe I'm meeting you here like this (continue talking very quickly so that no one else can get a word in edgewise). May I take my photo with you?" (Hold up camera in front of his face so that he gets the drift of what you just rambled off. Remember to talk really fast like those exclusion clauses you hear at the end of car commercials on the FM radio in America).


He will be shell shocked and have no idea of what you just said. No problem!


It's no problem because it is difficult English for a Japanese to reply, "Oh, I'm so sorry, I am very busy at the moment and must head off to my next appointment. So, please don't feel offended, but I must pass this time."


It is, though, so much easier for them to say, "OK!" "OK!" is probably the most widely known English word in the entire world. It is much easier, faster and less of a hassle for a Japanese to say "OK!" than to go into a long diatribe as to why you are a jerk and thy can't be bothered. 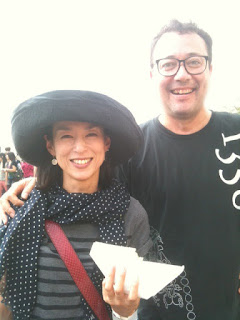 With actress Honami Suzuki 10/1/11 (don't even try to "dumb gaijin" stuff
with her. Not only is she beautiful she's smart and speaks
perfect English!)

So, instead of refusing me, and thereby looking like he can't speak English, he said, "OK!" He immediately put his arm around my back and we posed for the photo.


I helped him to feel good about it because even after the photo was taken, I rambled on for a few moments about how I loved Zatoichi and used to watch his TV show and had even appeared on the show once about 24 years ago, on and on, blah, blah, blah...


He replied, "OK!" then we shook hands and he walked off. He walked off, I had my trophy. He showed all his people that he can hold a conversation with a foreigner and everyone was happy!


See? Once again, in conclusion..  It's simple to take photos with famous people. Just walk up to them and start blabbing in English. It's much easier for a Japanese to say, "OK!" than for them to say, "Er, I'm sorry. I'm a bit busy now and running late." The second they say, "OK!" You got your arm around them and are posing...

It works every time... It works because you have the English advantage. They don't...

Wait a minute, come to think of it, this even worked with Arnie Schwarneggar and president Bush in Tokyo too... Oh, but wait, neither Bush nor Arnie can speak English well either! 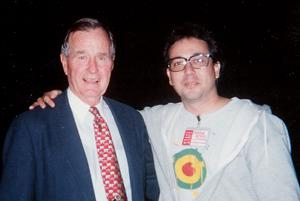 Nice. Your next book could be called, "Chutzpah in Tokyo".

lol, very nice advice. The only "famous" people I've had the pleasure of cheesing with are Bruce Campbell and Ethan Suplee, along with various no-name band members. I saw Leonardo DiCaprio in Kyoto last year, but his bodyguard declined a request for a photo. :p

Prime Minister Mori, I try to pay attention to world events and I had no idea this happened. As if it really mattered anyway,... nothing really matters in America,... nothing.

My girlfriend almost flashed her breast at Bill Clinton during a campaign stop... nothing really matters in America,... nothing.

That was so embarrassing looking back on it, pre-Lewrockwell.com ... so very.

I feel a bit bad as I have No clue who Beat Takeshi is, however; I like your attitude of, "I say invite the guy over for a Happoshu!"

... "Remember to talk really fast" HA! That was funny.

Also, I'm totally not into respecting of People for cosmetic effects, but at the same time, I can relate.


Didn't your wife get jealous of the Honami Suzuki photo? I know mine would, she is pretty and confident, double plus good. However; you look like a total dork, heh. A happy dork though. I would be too. ... What the heck does she have in her hand?

...dang it, I forgot to add my nic onto the comment.

... seriously, what the heck is she holding in her hand? curiosity has got me like a leprechaun wanting his gold.

With Prime Minister Mori when you were wearing the bright pink striped silk sport coat and powder puff pink bow tie, you happen to look very dignified, I say.

Were you a professional wrestling manager in that era?

I met former President Jerry Ford and had my photo taken with him. It was during the Clinton regime and I asked him what he thought about one of Clinton's scandals. Ford glared angrily at me and continued to do so for the photo.

You got to have a way with people to get good photos.

You guys all crack me up! Honami Suzuki and my wife, actually, are friends. She is holding a falafel....

He looked just fine in the photos with Prime Minister Mori and Beat Takeshi.

I was only kidding anyway.

Ahh, a falafel,... it looks like an origami or something.

Honami Suzuki! I'm a fan since I was little. She's still as gorgeous as she was back then, lucky you!