Marketing Japan: A Primer on the Long Tail


What is the Long Tail?


Anyone who wishes to do any business utilizing the Internet or any Social Media needs to fully understand the Long Tail in order to improve on whatever it is they are doing. That includes Facebook, U-Stream, blogs, Mixi, blogging, video-blogging, Myspace, vlogs, Pick, Linkedin or Twitter.

In fact, if you are involved in any of the above, then you are a part of the Long Tail.


Recently, my partner and I went to a satellite TV station here in Tokyo, Japan that is not doing too well... In fact, they are all worried about their future and the future of their station. (Incredibly, there are old media people who seem not to be worried about their station's - and their future - but this blog is for people who are not brain-dead.) Over these last 5 - 10 years, advertisers have been abandoning satellite TV (as they have been abandoning all other Mass Media formats) and spending their marketing and advertising yen in different areas.


Not only have advertisers been abandoning them, but, even more alarming for them is that the viewers have been getting off the sofa and doing other things too. Subscription Music TV is no longer cool like it used to be. And why should it be? Why do I have to sit through ten crappy videos to maybe see one I like when I can go on YouTube or Myspace and see what I like immediately? (Both YouTube and Myspace are excellent examples of the Long Tail in practice).


Don't be confused, just because this particular station is a digital satellite station, don't think they are not in trouble; they are... Admittedly, though, they are in much better shape than a dinosaur such as TV Tokyo or TBS is, but that is only because they do not have over a thousand employees like those terrestrial stations do. Most of these satellite stations in Japan have anywhere between 40 - 80 employees so their books - and their chances of survival - are much better than the major terrestrial TV stations.


Nevertheless, even though they are a satellite TV station, their business philosophy is still strongly rooted in analogue type of thought; and this will be their downfall if they don't act soon.


The station in question has been struggling through a few years of trying to figure out how to utilize the Internet to help survive as a broadcasting station but they have come up short consistently every time... I think the problem lies in that they can't get their heads around the fact that they will have to stop thinking like a TV station and start thinking like an Internet business in order to survive.


After having several meetings with them, I think I've figured out what their basic fundamental problems are: they do not understand the Internet (they think it is a crutch to support their TV broadcasting and they haven't a clue as to what the Long Tail is and what it means to them.


Up until now, and for the foreseeable future, broadcasters in Japan are, and will be, stuck in old-fashioned thinking. They still use their web pages as a place for one-way communication to their viewers. Simply put, their web pages are boring and, frankly speaking, only serve as an online TV Guide listing for the program schedules.


Not exactly the kind of content that is going to start a buzz or an overnight Internet sensation.


Of course, we had been trying to explain to them about the concept of Web 2.0 and creating "community" by giving away free, interesting content online, but for some reason, they never seemed to quite "get it." Oh, they seemed to understand that something has to be done, but couldn't put their finger on what exactly that it is that has to be done.


Then the boss would retort, "Why?" and then that's where the confusion came in... I'm sure the room would grow quiet.


But finally, at this last meeting, I think I have gotten through to them as to why they need to act. Finally, I believe that I explained it in a way that makes sense to them. And that explanation was the Long Tail. (Please understand that I am a professional speaker so if I had trouble explaining this to these good folks, I can imagine how hard it must be for most!)


So, now let me give you an EXTREMELY short explanation of what the Long Tail is. I also have a link below to Chris Anderson's bible on the subject, "The Long Tail" that I strongly recommend! 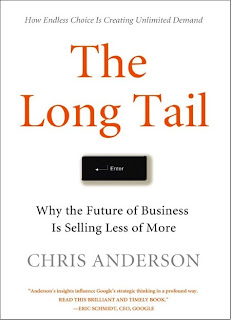 
The Long Tail explains is how things have changed in these last 10 years or so.


At the head of the tail (the top), there are your standard Brick and Mortar shops and businesses; shops that have limited retail space. In my example, I'd like to use Tower Records.


Tower Records is probably the most famous of the old style record stores. Everyone knows them... I used to go there  lot. Unfortunately, I figure they have a very bad future and won't be around in 10 years. In spite of having a huge amount of floor space, Tower cannot possibly carry everything.


Tower takes a risk on ordering product and having to distribute that product to their various stores. They have to guess how many of each product each store can profitably sell. It is inevitable that they will guess wrong.


For companies like iTunes, or Amazon, who work on the Long Tail, this is a huge advantage for them over the traditional retailers; they have no shelf space (well Amazon does too - to a degree - but they started MP3 and download business too).


A key component to understanding the Long Tail is shelf space. Businesses and organizations that cannot capitalize on the Long Tail have space restrictions. For each centimeter of shelf space, Tower Records must make a certain amount of money in return. In this case, Tower Records cannot possibly have enough shelf space to have everything, floor space costs money. So, Tower Records can only sell the hits or any CD that they might reasonably expect to sell more than ten or twenty (or, preferably, several hundred).


Philosophically, it is obvious that when one tries to be friends with everyone, they are friends with no one. This is why I predict that, say, InterFM will go bankrupt by end of 2012, maybe sooner. I also predict TV Tokyo insolvency by end of 2014.


But back to the Long Tail.


Tower Records, TV and radio stations have only so much "shelf space" they are confined to a physical world. But, take iTunes for example; iTunes has no space restrictions. iTunes carries millions of titles and their catalogue grows daily. How many titles does the biggest record store in the world carry? 30,000? 100,000? And each of those titles cost money to carry; they must pay the rent. Shelf space costs money!


How much does it cost iTunes to carry some bits on a server that has 3 million titles on it? Almost nothing and it's getting cheaper by the day.


Look at the chart below. At the left are my examples above: Tower Records and the TV and radio stations. They only have so much space, space costs money; they have to cut off somewhere what product they are going to carry or broadcast. THAT is the point where the Long Tail begins. 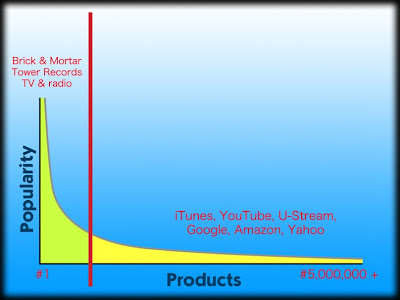 I have marked the cutoff line in Red. To the right of that red line (and, by the way, including everything to the left of that cutoff line) are the products that a company like iTunes carries.


You'd think that, to the right, this line eventually goes to zero. It doesn't. It never goes to zero. The market is growing exponentially (in spite of what the major labels are saying) and because people are being offered more and more choice, they are taking it. Today we are witnessing a cultural explosion of DIY people and new artist's, authors, publishers, musicians, comedians, producers, writers and more. The end is not anywhere in sight.


The Long Tail is providing us with much more freedom of choice.


And here is the kicker, because storage of data on bits costs nothing, then places like iTunes, Amazon (MP3, E-Books), etc. can store hundred's of thousands, no millions of titles... More, if they wish... And it costs them almost nothing. It will be Game Over once the rights issues are resolved.


Now, look at the chart above again.


To the left are the old stores and old media. At the bottom is the Long Tail of the new media. It is a fact now, since people are being offered so much more choice, that "Apple said that every one of the then one million tracks in iTunes had sold at least once (now the inventory is twice that)." This means that, cumulatively, that the products in the Long Tail add up to a significant portion of iTunes business... As the tail gets longer, it is merely a question of time (probably a relatively short period of time) when the Long Tail's total sales will surpass those at the head of a traditional retailer.


What will that mean for our culture, entertainment and economy?


Even with this explanation, I knew, from experience, that I still had to educate my friend's at the satellite TV station to be able to go to their boss and explain to him why we had to reform their Internet business....


I did that. Now, if you need any more convincing, take my chart and turn it vertical. Now the end of the Long Tail is at top and it is still extending. 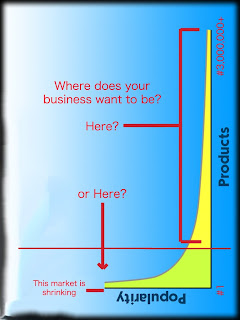 Where does your business want to be in the next few years?
At the right or on the bottom?


And the bottom, well, the popularity segment is shrinking as can be witnessed by dropping sales of major artists and Rock radio...


Now, where do you and your business want to be in the next few years? At the top right or at the bottom?


Utilize the benefits of the Internet to, not only benefit your current business, but to reform and revitalize it. Understanding the Long Tail is key. Now that's not just smart, it's good business and intelligent marketing.


Note: For a more detailed explanation of the Long Tail, I highly recommend reading Chris Anderson's "Why The Future of Business is Selling Less of More - The Long Tail"