The big summer concerts in Japan are having a hard time selling tickets... In fact, from what I hear (and I have excellent sources) ticket sales for Fuji Rock and Summer Sonic are dismal at best.

The word on the street is that ticket sales for any shows are bad but there is one ticket that is impossible to get as all four shows are completely sold out! 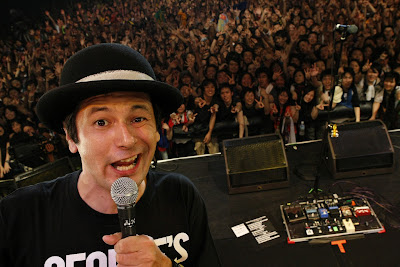 George Williams at GG10 July 21, 2010 (photo by Yoji Kawada)
Four four days this week, Music On! TV and host George Williams have held the 9th annual "GG" concert series this year at Shibuya Ax and this is the hottest ticket in Tokyo.

GG10, as this year's shows are called, have a logical, well-planned lineup (see line up here) - along with a crowd pleasing ticket price of ¥4,200 (about $45 USD). This blows Summer Sonic out of the water! Summer Sonic has a artist lineup that probably pleases no one (Who in the hell wants to pay ¥29,800 (about $320!) to see Offspring open for Jay-Z?)

On the other hand... It might be better than going to the other side of Japan and spending over ¥82,000 ($900 USD) to go see Fuji Schlock where a bunch of geriatric old folks relive the crap music of the late 60's and early 70's...

Not only did the Music on! TV folks do a superb job of lining up a killer roster of artists, they promoted the shows well and they were sold out long ago.

Eat your hearts out Creative Man and Smash!

So, while all of Japan withers in this economic slump, George Williams and Music On TV sell out four shows in a row... They used a great mix of old media and Internet to sell the tickets and the great line-up gave them killer credibility. Sorry, Summer Sonic, but no one wants to pay to see Taylor Swift open for Stevie Wonder... Jeez! What a lame-o line up!..

I wonder why companies like Creative Man don't understand the simple concept of "Credibility is hard to get. It is even harder to buy"?

On top of this, George Williams uses the Internet and Social Media to give the concert goers - as well as the unlucky folks -who wanted to get tickets but couldn't - a chance to see what's going on back stage! Wow!