One More Phase in the Shattering of Mainstream Media

I rode the Tokyo subway today and saw a sign inside the car that notified the passengers that as of July 24, 2011, terrestrial television stations will no longer broadcast analogue signals in Japan and will finally make the switch to digital.

This signals what could be the final nail in the coffin of many of the FM radio stations in this country and the collapse of TV Tokyo and TBS. 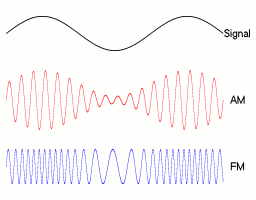 I predict that InterFM will either be bankrupt or sold to a new owner by 2014 and TV Tokyo will be in the same situation: insolvent or absorbed by another company by 2016.

I'd like to explain why in this post but first let me give you some important details involving the background of broadcast signals so that you may have a better understanding and why I think this way. Let's see if you come to the same conclusions that I have.

Let's start with AM and FM radio.

AM is called "Amplitude Modulation" and its signal is wavy. When an AM signal comes to an obstacle like a mountain or a tall building, it bounces off of it in many directions and continues going. This is why, in many areas of the United States, there are some AM stations whose broadcasts can be heard over 600 miles (1,000 kilometers) away. The AM signal is like an ocean wave so, if there are no mountains to make the signal deflect into the heavens, the signals will bounce along the earth's surface.

This makes AM radio great for talk and the friend of people who drive long-distance trucks.

FM is called "Frequency Modulation" and it goes in a straight line. When an FM signal hits a mountain, tall building or other obstacle, it stops. We've all had the experience that our favorite FM station drops off when we go through a tunnel or through a valley. That's the shortcoming of FM radio.

What many people do not know is that terrestrial TV uses the same FM frequency for its broadcasts too.

People who were brought up in Japan may remember from their childhood small portable transistor radio that had the AM / FM band on them but also played TV channels NHK and NHK Educational (1 & 3).  If you understand that analogue TV uses FM frequency to broadcast, then you now understand why those old transistor radio's had TV channels on them.

This is important so keep this in mind.

On July 24, 2011, the TV channels will stop broadcasting analogue signals. What this really means is that they will stop using the FM band for transmitting their services and go to terrestrial digital.

I suppose that some of you have seen binary data before. It's a series of zero's and one's and looks something like this:

That is binary data. The reason why digital broadcasting is so clear and high quality is that, with binary data, it is either "on" or "off" unlike an AM or FM signal that can be blocked or deflected by tall buildings, mountains or even trees. Binary Data is crystal clear.

Now, how does this spell the end of FM radio? Bear with me here, cause now we're getting to the nitty gritty.

The future of FM radio doesn't lay in what they broadcast or how they up the ante of quality of content (but, of course, it will always be a competition between stations for dwindling audience and sponsorship dollars)...

The future of FM radio depends on what Toyota does.

That's right. Toyota is the one who decides what is going to happen. In my opinion, it is obvious that FM  is is serious trouble and that we are now witnessing the end of an era; and it's happening, in slow motion, right in front of our eyes.

But, don't take my word for it, decide for yourself. Let me explain further...

Think about this: Where do most people listen to FM radio? In cars, right?

The Japanese government and all the big manufacturers in this country, Sony, Panasonic, etc. (who, by the way, all have an incestuous relationship with each other and Toyota in stock holdings) are pushing for the digital conversion big time. These manufacturers need their flagging fortunes to get an injection of sales and profits that new broadcasting and new equipment will generate. Digital equipment costs anywhere from $500 - $2,000 (USD) a set. The Japanese manufacturers want and need for the Japanese public to go whole-hog into digital broadcasting. They need the public to dispose of their analogue equipment and buy the new digital equipment... (By the way, a cursory check of analogue equipment at Bic Camera the other day - what little I could find - showed that all the analogue products were all manufactured outside of Japan).

If digital broadcasting is a failure in this country, then it's going to hurt Japanese manufacturing for a very long time... The analogue equipment I saw was all manufactured in Malaysia, Indonesia, and I found some from Taiwan (which was surprising).

Now, how does Toyota fit into this equation?

Imagine your car dashboard. It has a GPS, CD player, and television/radio set all built together. Most people have an analogue device (with terrible TV reception!) From July 2011 there will be no cars that come with that device. They will all be digital.

After July 2011, on your dashboard, you will have a digital GPS, Internet, digital TV and digital radio. Want to do Social Media, YouTube, Twitter, U-Stream, blog? Got you covered. Need to Google or Yahoo search? Sure. When you need traffic conditions, just a click on your GPS will give you up to the minute details on traffic and road conditions. All the TV channels? No problem. Throw on top of that 6 digital radio channels and, of course, a CD player and probably an iPod connection, and you have the next generation of car entertainment system. (In Japan, as of now, there are 6 digital radio channels that are shown on CS or BS television. These channels broadcast soft jazz and classical music).

Toyota HD Digital Screen.
All sorts of fun things like iPod, digital TV and digital radio...
Do you see FM or AM radio? I don't

Remember I wrote that digital signals are binary data and analogue is a broadcasting wave? This is important now.

I ask you, dear reader, to consider; Since Sony, Panasonic, etc. and companies like Toyota and Nissan all have an incestuous relationship as to stock holdings and company ownership, and they desperately need to have the Japanese public buy their digital devices that cost at least $500 each... And digital devices receive binary data and are not analogue compatible... Do you think that Toyota will cut a hole in your dashboard, just under your $500 digital GPS, TV, Internet, radio device in order to install a $1 dollar made in Indonesia FM tuner?

I don't, and I think it is insane to think otherwise. Actually, the notion is laughable, isn't it?

So, if people can no longer hear FM radio in their cars, then where are they going to listen to it? In the subways with their white earplugs through their iPods and iPhones?... Get serious. Nobody does that now!

If there are any folks reading this who remember how popular short wave was way back when compared to what it is today, then they have a good idea what I think the future of FM radio in Japan looks like....

No FM radio in the car spells doom for the FM stations because if no one can listen in their car, then FM will have no listeners at all... No listeners means no sponsors. No sponsors means no money. No money means no FM...

I cannot imagine how they will survive the next 5 ~ 10 years.

If I were a station like J-Wave - that still has good ratings and high listenership - I'd get into negotiations real soon for an open digital radio channel... And, no, the license and digital conversion are not cheap. We're talking hundreds of millions of dollars. The smaller stations will never afford it, so they are dead.

And that's why July 2011 is the last nail in the coffin of FM radio in Japan.

But what about AM radio you say? Ah, that's the interesting contradiction. AM radio will probably survive. Because AM car radio is the bottom of the pit for basic car equipment (besides nothing at all)... Almost every Tokyo Taxi has an AM radio in it. Few have FM radios.

Tomorrow I will explain why this entire situation bodes ill for TV Tokyo and TBS TV.

Interesting article..makes sense to me..