Marketing Japan: No Medium Can Survive the Indifference of 25-year-olds...


By Mike Rogers
After talking to a very interesting fellow named Roger Marshall from Odgers Berndtson on the phone this morning, and after reading the article I want to introduce today, I was inspired to quickly write up this short blog. Hope you find it interesting and useful.
There is a great article in the Guardian UK today. It is mostly about online newspapers charging for services in a scheme called, Paywall, that Internet Guru Clay Shirky says is doomed to fail (You won't find me disagreeing with him). It's an excellent article and I strongly suggest that any read it.

Most people will not have heard of Clay Shirky but he is recognized as one of the world's top experts of Social Media.

But there is one part in the article that struck a chord with me. This one part should strike fear in the hearts of anyone who is working in the old media. It says;

...if you are 25 or younger, you're probably already reading this (article) on your computer screen. "And to put it in one bleak sentence, no medium has ever survived the indifference of 25-year-olds."
I found this particular point quite useful and timely as, if you read my last blog about the Long Tail, you'd know that I am now in discussions with one of the larger satellite TV stations as to what to do about their admittedly bleak future.
In the case of this music TV channel even they know that 20-year-olds today;
1) Do not pay for subscription TV (their parents do - and it's probably part of a package anyway). The 20-year-olds do not have the habit or thinking that they need to pay for music TV.
2) When 20-year-olds want to see their favorite new band's video, they won't wait through 20 other videos that they don't like in the slim hopes to see the one that they do like. They will just click on YouTube and see what they want, for free, right now.
The TV station people understand this. Yet they are stuck in a sort of denial and they hope that things will get better...
Sorry folks, but I have found that "hope" is usually not a very good business plan.  Funny that.
The other interesting thing the TV station people have all said to me when I asked them, "Why do young people watch your TV channel?" They almost all invariably answered, "I think they search the Internet using Google Search or Yahoo for an artist that they like, then they turn on our TV channel..."
So, dear reader, bear with me for a second as I get this straight in my own head...
Let's see.......A guy or girl goes on the Internet to find the music that they like... They do! Then the TV station people think that the young person, after finding what they like on the Internet, is going to turn off the Internet and turn on the TV and watch their channel!?....
What in the world are these people thinking!?
Yes. I found their thought processes quite amusing also. But it just goes to show the depths of denial that some of our good friends are in. And, don't forget, most of these kind people that we must convince are coming from a far different point-of-view than we are. They come from inside their companies, we come from outside...
It is often far easier to understand something like, say, one's own country when they are on the outside looking in.
We need to convince our friends in old media, and in other businesses in general, how they can increase their business and protect their jobs (families too!) by opening up their minds to the possibilities that the Internet can offer them. We need to show them that the Internet is not a threat. 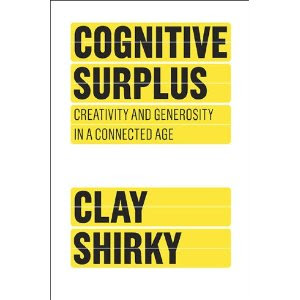 Clay Shirky Cognitive Surplus
In Japan, the opportunities are everywhere. Most companies seem to be running their web pages as a sort of company directory instead of a branch of a business that turns a profit by itself. From what I see today, 92% of the corporate web pages are still Web 1.0. So, opportunities abound!
The companies that do embrace this new way of thinking will have a much better chance of survival and could even prosper.
I won't go into more about the article in the Guardian, but will say that I think you should read it. If you need ammo in convincing someone that they need to wake up and start acting, then it could help.
--------
Keywords: Guardian, old media, Odgers Berndtson, Clay Shirky, Satellite TV, Internet, Google Search, Mike in Tokyo Rogers, Paywall, Social Media, Japan, business, music TV, Yahoo, Google, online, newspapers, Roger Marshall,