Open Letter to My Gun-Control Friends... Alas, You Are Right!


This is an open letter to one of my friends who is pro-gun control... Well, that's not exactly true; he doesn’t just want gun control. He wants to make all guns completely illegal. 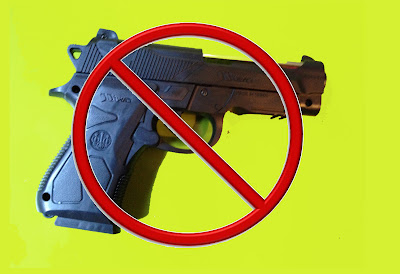 About gun control: I agree with you. We need to protect the children. I understand that the best entity to do that is undoubtedly the US government. They have a proven record of success that cannot be matched!

Perhaps you should tell everyone who is against gun control about how the U.S. government protected them when they killed about 1 million Native Americans (who, by the way, didn't have guns). Those Native Americans were savages and they had to die to make way for our God-given manifest destiny and us.

Also remind people not to forget the great protection the US government gave its own citizens when it waged a war against them and killed nearly 700,000 of them in a war to protect sanctity of the state between 1861 and 1865? A war that killed citizens that had voted in that government to protect them!

Or how, as late as about 1890, the US government righteously executed over 150 American Indians (80% were women and children) in a legal gun seizure raid at Wounded Knee? Or freeing those evil Branch Davidians at Waco, TX in 1993, killing 76 men, women and children?

Don’t forget to mention the now rarely disputed view that FDR knew about and encouraged the Japanese to attack Pearl Harbor - and didn't allow his commanders to know about it, so that 2400+ Americans died? FDR did that to save lives!

Sure, sometimes there are tough choices to make, right? But remind everyone that the US government are always the Good Guys, with God on our side. Everyone makes mistakes, but at least our government means well.

Isn’t it wonderful living in the greatest country in the world?

Or, don’t forget to mention shooting peaceful student protestors and killing them at Kent State in 1970! Sure, those things happened... But it was for those students' own protection!

9/11? What? There another 3000 died. But no one could possibly imagine that our benevolent leaders would intentionally allow the world's most powerful, most feared, air force to sit at base doing nothing at the time, right?

Some nutcases will argue that US history is replete with the US government committing gross crimes against humanity (Hiroshima, Nagasaki) and a litany of atrocities against its own people. But these cases are all hearsay. What proof do they have?

Blowing away a few to several hundred troublesome Americans matters to no one except conspiracy nuts and terrorists, right? I mean, if they are troublesome, they can’t be “real Americans,” anyway!

We need to protect the children. We need to take guns out of the hands of the citizens and give it back to the government….

After all, history shows that the US government is our best protector. They've proven, over and over, that they will take care of us!

Thanks to my friend, David Kramer

An interesting and informing piece. You seem to enjoy goading, or should I say, "getting the goat" of the average American. Although I must say that you've pulled back the rhetoric a bit lately.

My personal belief is that the issue of gun control tells more about both the culture of a people, and its government, than what the law itself may or may not accomplish.

It seems rather interesting when one looks at certain countries. Great Britain springs to mind. It went from probably as near as a government can get, from totally trusting their citizens, to an almost total 180 degree turn in less than a lifetime. For example, in the past, one could buy a firearm through the post, while simultaneously, the police were almost totally unarmed. Now it is quite difficult to have any sort of firearm, even a BB/pellet rifle, and the police now look with their sub-machine guns and bullet proof armour, as if they are auditioning for a totalitarian state.

It seems that both massacres of civilians by other civilians, and increasing calls for gun control, seem to be endemic almost exclusively to the Anglo-Saxon world. One can argue why people in general, and Anglo-Saxons in particular, get so upset when other civilians murder each other in great numbers, but seem rather blasé when governments do it to a far greater degree, but that is probably best saved for another time.

I will also save you assertions about how FDR "encouraged" the Japanese for another time. Except to say no matter how much one is "encouraged" to murder people, the ultimate responsibility still rests with the one who commits murder, does it not?

As to the interments, in hindsight it was a major overreaction, but there was a great deal of fear regarding the evidence of a number of both traitorous Americans of Japanese decent, and enemy Japanese nationals in the country. The internment was mostly concerned with the possibility of attack on the West Coast. Most are unaware that nearly all of the Japanese who lived east of the Rocky mountains were never interned. Finally, regarding internees, of all the belligerents in World War 2, the US government was probably one of the most magnanimous.

Regarding Nagasaki and Hiroshima, the government of Japan could have surrendered at any time. Instead the Japanese government chose to save potentially a few dozen at the top from "a long walk to a short rope," versus the deaths of hundreds of thousands of their own people at the bottom. The Japanese government knew this, and the results ultimately rest with them. (BTW, your Hiroshima & Nagasaki links don't work.)

As to atrocities against their own people, I think it is rather terrible, but unfortunately all too common. Look at nearly every country that has ever existed.

Your argument about how the US government may not have the best interests of its own people, is probably true of every country.

Just because one can imagine a perfect world, doesn't mean one is likely to exist.

I've been reading about Chinese history lately and nothing that the US has done comes close to what happened in that country. Case in point:

Kent State: only 3(?) students died compared to Tianamen square (thousands). Kent State also was the straw that broke the canel's back and precipitated the end of US involvement in nam.

You mentioned something like a million dead in Iraq. The numbers I've heard are many magnitudes less. That doesn't justify any of the foregoing, but at least provide a credible statistic.

Come on, now. Get real. Even the US Secretary of State Madeline Albright admitted herself on TV 500,000 dead Iraqi children BEFORE the invasion started due to sanctions: http://www.youtube.com/watch?v=omnskeu-puE

Here are the counts from the most credible and respected sources. You'll see Lancet at about 650,000 as of 2006...(7 years ago) and ORP at over 1,000,000 as of 2007: http://en.wikipedia.org/wiki/Casualties_of_the_Iraq_War
Credible enough for you? PS: Why do people write stuff like this? Don't they know how to do a quick Google search? The information above is the 1st result from "Iraqi War Dead"

PS: Anonymous, your data is seven years old too... I also notice you conveniently choose the lowest of all counts. How quaint! Denial isn't just a river in Egypt.

You are mistaken, the site is still being updated and the number is through dec 2012 at least. Denial is just as prevalent amongst libertarians apparently.

Yet the fact remains that non-US based research groups, Lancet and ORB both have the figures (it clearly says, "time period") well over 650,000 and 1,000,000 respectively... I also notice that you conveniently ignore Madeline Albright's admission of 500,000 dead children...

You are both wrong. The death toll, from the most recent and reliable source is well over 1.4 million Iraqis: http://www.justforeignpolicy.org/iraq

I live in a country where gun control exists and we get plenty of murders committed by the aid of illegal weapons. Every day we see headlines on the media about those acts.

The main problem with such laws is that criminals don't care about them. They will get them, they will use them and they will traffic with them no matter if there is or there is not a law that prohibits it.