Obesity is the Number 1 Problem Facing America Killing Over 300,000 a Year! - Ban Spoons! Enforce a "No Pie Zone" Over the USA!

It is well known that obesity is Americas number one killer today. Don't believe me, just take a gander at a photo of Michelle Obama as she makes the quote above. Talk about the pot calling the kettle black! 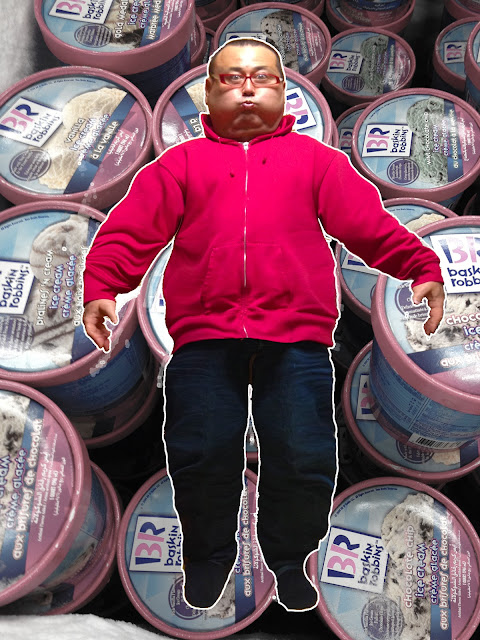 "The spoons made me do it!"

Recently many people in the USA have been calling for a gun ban as we all know that inanimate objects (as well as God, dogs, voices in the head and Frank Zappa recordings) can and do control human actions. Guns are responsible for about 9,000 deaths in the US annually. Meanwhile obesity, er, I mean, spoons and forks, account for over 300,000 deaths. Where are our priorities?

Of course we need to ban all guns and ammo (as well as camoflage clothing, night vision glasses, camping equipment and Sterno lanterns). But, let's get our house in order and set our priorities straight! We must fight back against the obesity epidemic by severely restricting spoons and all other types of silverware and table utensils.

The real problem with America today is obesity... Therefore I propose a federal ban on spoons as too many Americans eat far too much ice cream and sweets... I also propose enforcing a "No Pie Zone" over all major American cities.

I have pitched this idea and done so for absolutely free (no copyright claims to come from me as I do this for the greater good). I have also shown this idea to my intelligent friends on Facebook and asked for their opinions. I think you'll find the following exchange of ideas to be quite refreshing and invigorating....

Let's now put our heads together and find a way, a true way, in the American spirit of bi-partisanship in finding the best way to deal with this obesity scourge that is obviously caused by kitchen utensils.

I have a dream! Today spoons and forks, tomorrow ice cream cups and tabel cloths!

Let the discussion begin! Here's how we tackle this obesity epidemic once and for all! Here are selected quotes from today's distinguished panel!

Red Brown: You need to move incrementally--you can't just throw this down all at once. First you need to make people register their spoons, and also restrict the capacity of spoons allowed. Once that becomes accepted, you can move towards limiting the number of spoons a person can have, and you can also restrict the movement or exchange of any spoons. Then, and this is the important part, you announce that there is a bill in the works to criminalize any and all silverware. Finally, you strike down all the provisions of this new bill except banning spoons of any type. You also move most of the old spoon restrictions over to forks. Everyone thinks they got off pretty well and gives up their spoons--easy as that!

Marc Abela: Since you don't want to alarm everyone, first I suggest we increase taxes and add bureaucrats who will build a paper based federal spoon-registry list.... all spoons will need to have a serial number on them, and they will need to be registered and attached to a clearly identified owner...

Me: Good idea! I suggest a federal commission be created to study the feasibility of federally mandated studies studying registration of spoons. Perhaps we can implant chips in the spoons to make sure individuals are not sharing their spoons with other people in violation of section 23.10009234B of the "Freedom in Spoonerisms Act of 2013." My only fear is that people will use loopholes to get around the laws and insist, for example, that those little plastic spoons you get at Starbucks for stirring coffee be exempt from all federal regulations and taxes.

Robert Gibson Hill: Make everyone eat with a coke-spoon.

Me: Harrumph! Are those Coke spoons under 16oz size?

Red Brown: Unfortunately, a huge black market, of illegal spoons from foreign countries and also locally made spoons, explodes into existence and the Feds create a new bureaucracy called the BATFU (Bureau of Alcohol Tobacco Firearms & Utensils). This monstrosity consumes 1/10 of our federal budget and most of the employees are grossly-overweight. It doesn't matter though because nobody but extremists and conspiracy theorists give a shit.

Me: "BATFU !?" I laughed so hard coffee came out of my nostrils on that one!!! Well, it's all good on paper, but will it really work? Usually, as Ron Paul says, "Enforcing No Pie Zones" is an act of war under the Geneva Convention.....A precedes a full fledged military invasion (to seize spoons). Can the US afford such actions under the current economic environment? I think not... That is, unless, of course, the invasion pays for itself when we melt down those spoons and resale the metal to China (like the Iraq war was paid for by oil seized).

Red Brown: The BATFU is here to see you! They are now working with the DHS (Dept of Household Security) and need to see your kitchen. A no pie zone has been established between Wendy's and Arby's, where your neighborhood is.

Red Brown: It is illegal to have your own black market pie, but you can buy commercial pies--they just taste like shit and cost a lot. I have heard there is a pied pipeline, from Mexico, and you can get pies there--they all taste like cinnamon, though.

Me: I hear Hostess pies are still available down on Market & 5th street. Ask around....

Red Brown: 'm cracking myself up just thinking about this--what a total folly it always is when the government sets out to help us by harming us.

Me: No! No! You are not adult and mature enough to understand the difference between a safety spoon and a dangerous one. Sure, sure, some people say spoons are a "Gateway utensil" that, later on in life, leads to even more over eating, but that hasn't been proven in laboratory tests!

Me: Heads Up! They just made these illegal!

Read the description on this pocket monstrosity! It says, "Look like a big honkin’ swiss army knife, the Eatensil is designed for the kitchen. It combines seven tools which make eating easier—a spoon, fork, knife, pizza cutter, chopsticks, bottle opener and wooden chip fork—all in a Swiss Army Knife-type casing." "The Eatensil"???? We've got to put a stop to this!!!! 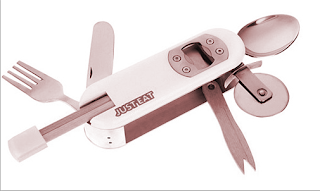 Red Brown: Remember, food is bad. The last two letters are OD (outside diameter) as if it were some kind of sick joke. I used chop sticks the other night--they are the bolt action rifle of utensils, for sure. Easy to manufacture, though. How anyone could get fat with those damned things is beyond me...

Me: You are either with us or you're with the delicatessen owners.

Marc Abela: Hahaha, thanks for the great (great) laugh. OK so, I'm ready when you are, my "but spoons DO help" poster should be ready in a few moments (for the moment all the crazy revolutionary rebels come shouting our way "spoons don't feed people, people feed people!").
Yep. Outlaw guns because guns cause gun crimes. Outlaw glass bottles at bars because glass bottles cause people to get their necks slashed. Outlaw kitchen knives because they stab people...

But remember to shout down those who don't think that inanimate objects control people to do things they normally wouldn't do. The evidence is there and the science is decided....

If anyone says "Spoons don't feed people, people feed people" make sure you print this article and shove it down their throats....

Because everyone knows printing machines cause choking.
at January 01, 2013

Sorry, but it is truly exhilarating to see the tide finally turning on this. Hope to see super high taxes or an outright ban on those assault ladles. As I have deemed myself to have god like qualities, I can proclaim from above that "no one" needs an assault ladle. Those ladles won't be killing/threatening more children.

And wHAt about sporks? Hmm?

This whole post was funny - and so true, too - the photo cracked me up as well. Perfect, it was.

We are ruled by sociopaths who work with retards, both working hard to control the same - and us Freedomistas at the same time - all while trying to seem to make sense.

Why are they even trying to make sense?

Is it because they don't have the upper hand, yet?

Escaping the lies goberments and others have been spreading for so many... for so long, is very hard for some People to do.

The Daily Bell was discussing how the 1960's and 1970's counter-culture movement in the unitedstates was a manipulated and contrived 'event' to some extent, orchestrated by a room full of suits and ties with an agenda, a.k.a. Travistock, et al.

That's an almost impossible concept for many to grasp, which leads me to think they will Never 'get' how used and manipulated they are.

... And then go from there. Many cannot do so, they cannot escape Dreamtime.

It amazes me how some People can ignore the facts.

The call for bans on soft drink size in NYC is just noting a trend in American culture. There are top down solutions (Federal and State government) and bottom up (individuals organizing, local government) solutions. Large amounts of parents have been taking action in areas of the US, yet America is a non-homogenius nation. Finally Mike gets a response on this subject from his blogging. He had to be absurd to get any. (He knows how to market to his target audience, sad fact that all the students are sleeping and don't care unless their freedom is impacted :P )Check out his past articles on obesity, and tell me if you see many, if any comments. Many of us know the obesity facts of the US. We joyfully adopted the Iron Chef cooking show from Japan. We gave the world the Biggest loser show.

Anyonymous, @10:01 AM You do Not seem to really be making a whole lot of sense.

I just stopped by to say again how I was laughing - even today - about that first photo, and then I find this. Such a disappointment.

"Top down solutions",... that's another way of saying tyranny, unless it's truly voluntary. F.Y.I.