Why a $1.8 Million Dollar Tuna is Dirt-Cheap


This blog post is about a very misunderstood topic recently. Of course you heard about the tuna that was sold for a record $1.8 million dollars at the first auction of the New Year in Japan? That price of $1.8 million dollars set a record. It was the top story on all the Japanese networks, the Internet and even on TV and media across the globe: it was one of the top stories and big news all over the world. People couldn't believe that anyone would pay that much money for one fish... 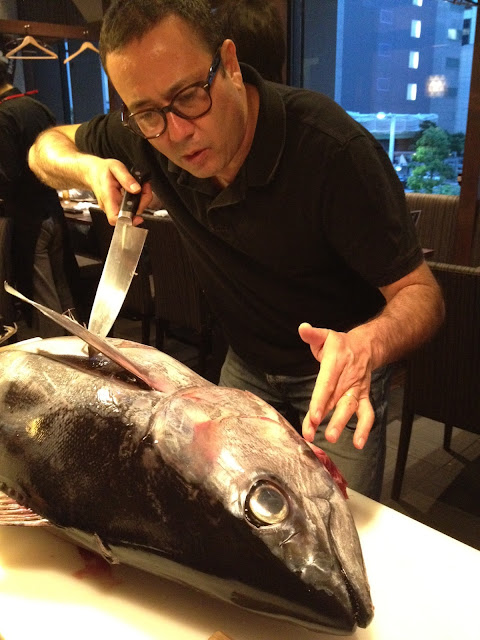 But, my friends, that $1.8 million dollar price was dirt cheap. Those folks who bought that Tuna didn't really buy a fish, actually, they bought an advertising campaign. The tuna was a prop.

Lots of people seem to misunderstand this.


To explain it to you, let me show you an e-mail exchange I had this morning with a guy who owns a cool domain name. He wrote to me through Linkedin. This is an episode whereby this guy contacts me and wants me to help him sell a domain and wants to justify the price of that Internet domain because a fish sold for $1.8 million dollars! Now, that domain might be worth several million dollars but the price of tea in China, er, I mean, the price of a tuna at auction has nothing to do with it.

Here is his first email:


--------------------
Hello. I own the premium generic category defining domain name Sushi.com. I am reaching out to you to see if you are interested in brokering a deal on it with a business owner in Japan that I know would be very interested?  Let me know if interested in talking more. This is a very rare and large opportunity.  Your compensation would be commission based.

Really. I do know a guy. I know the largest tuna fish dealer in the entire United States. Now, he only sells to companies (B2B) and not to the public, so he might be interested. Or he might know someone who is.


--------------------
Well with the recent Tuna fetching $1.8m USD earlier this month in Japan owning sushi.com is MUCH more long term of course and would be MUCH more prestigous. (sic)
Pizza.com sold for $2.6m and Sushi.com is a much better more prestigious domain
by far.  We are asking $5m USD. Commission would be 10%. Bring an offer. It would
also include Sushi.net and SushiRestaurants.com and JapaneseRestaurants.com.
If your lead can't bring a good offer on this asking then I do know others who can
so please do bring an offer.
thanks
Todd

To get off the point for a second, already I am a bit perturbed. Why? He wrote, "If your lead can't bring a good offer on this asking then I do know others who can..." Oh really? Well then what is he asking me for? He is obviously trying to make me think I have to hurry to get in on this once-in-a-lifetime deal... Yes. Why do I feel like I'm talking to a used car dealer?....

Nevertheless, I wrote back in a business-like manner:

Well, my friend, thinking that the $1.8 million dollar tuna sale justifies your asking price for the domain (at any price) is inconsistent logic and I'll tell you why: In Japan, the first tuna sale is a big deal culturally in this country. The party that bought the tuna runs a mid-price chain of sushi restaurants in Japan... I'd guess there's hundreds of them including take-outs and revolving sushi, etc.... They bought that fish and then sold the individually cut sushi at their regular price of about $3 for two pieces (that should have sold for about $300 for two pieces)... They lost easily a million dollars on this.

The amount of advertising they received over those 3 days in a national campaign that was paid for would easily cost well over $15 million dollars... So, that is why a $1.8 million dollar Tuna, for those people, was a steal.

Think about it. It is called Buzz Marketing.

By the way, their name is Sushi Zanmai and "Zanmai" is a very well known name here for a sushi restaurant. It's along the level of "Denny's" in the west. I doubt they'd be interested in a domain named "Sushi" just as I'm sure that Denny's would not be interested in a name like "Family Restaurant."

No, my friend, the only people who would buy your domain is a Business to Business (B2B) company and I doubt that they will even be remotely interested at that price.

To that Todd seems to have gotten mad. Oh, why do I have to deal with people like this? Check it:

On 01/09/13 1:59 PM, Todd wrote:
--------------------
Sorry that you don't understand domains. We have had offers north of $2m for it. We paid 7 figures for it. the domain gets 100,000+ direct navigation type ins a month. I have sold $25m worth of domains within the past 24 months. You need to follow the domain name market as it seems you are out of touch. Its only getting bigger and bigger. A client of mine just sold the domain name autoinsurance.com for 8 figures domain only. Sorry that you are not in touch with this. All the best to you. Sushi.com would bring in much more advertising than a one time fish buy MUCH more. We have many great offers on it all in the 7 figures. $5m is chump change to me.

Oh, dear! Todd... My friend... You seem to miss the point. All I was saying was that thinking a domain site named "Sushi.com" justifies a high price because some company paid $1.8 million dollars for a Tuna is, well, to be kind, some very interesting and, er, "creative" logic.

Anyway, after that Todd went on to insult me and talk about how he has a company in Japan and doesn't need my help, blah, blah. He ended his messages with this comment out of left field, "Canada is the greatest country in the world!" To which I replied, "Are you and I having the same conversation?"...

Anyhow, I left it at that. If it's "Chump change" then, as I said, why is he bothering with me?

Sheesh, you try to help people and they get mad. Todd will do well trying to deal with Japanese businessmen... Chuckle.

Anyhow the point is not that a fish costs $1.8 million dollars. The point is that a major Japanese restaurant chain made a killer marketing and promotional campaign that captured the attention of the world and should have normally cost into the tens of millions of dollars for the dirt-cheap price of $1.8 million.

Because if they had bought the TV and other mass media advertising to get the same reach & frequency and promotion that they got from that fish buy and subsequent sale it would have been $20 million dollars in Japan alone.

It was a stroke of genius and marking Coup De Etat.

Not only was the buying of the fish a marketing masterpiece, but also several days later, at their restaurants all over Japan, they got massive promotion when hundreds of people lined up to pay the regular price of ¥300 yen (about $3.30) for a plate of premium sushi that should have sold at a high-end restaurant for $300 ~ $400 a plate. I heard at one restaurant there were more than 300 people lined up the street waiting to get a bite of that sushi. No joke!

Gee, do you think that having hundreds of people lined up at your restaurants and having TV news report that is worth millions? In fact, that kind of advertising is priceless.

Imagine the scene inside that sushi chain's upper management office before New Years - they wanted a ad campaign that thrilled the nation. They decide to spend big bucks on a campaign. They investigate many avenues. They get all sorts of plans from all the top advertising agencies in the world. All campaigns are costing anywhere between $10 ~ $25 million or more? (advertising in Japan is extremely expensive as you may know)... One guy at some company, or maybe even in-house (probably in Buzz marketing section, if so) comes up with the idea to buy the Tuna at any cost at the New Year's auction... They calculate they can out bid the others (who think they are nuts) at an outrageous price.... They do.

They actually want the price to go up to nose-bleeding heights! Heck, I'd wager they intentionally bid sky-scraper numbers to get more advertising bang for their buck. It seems obvious that they wanted to pay a world record price!

They've calculated the price versus what the reach and frequency of a similar ad campaign would have cost and they come out like Kings: they get their name in all media; TV, radio, magazines, the internet, blogs, etc... even all over the world, and all at a dirt cheap price.

Doing so is the Holy Grail of an advertising campaign.

Now, as Paul Harvey would once say, "Now, you know the rest of the story!"

NOTE: I did ask my friend "who might be interested" his name is David Leibowitz and he is the largest tuna dealer in the United States and one of the largest in the western hemisphere. His reply about buying the domain, "Hi Mike! Happy New Year! I'll ask about the domain but probably no interest."

So there you go. Todd should have taken the $2 million dollars... That is, if he ever got that offer.

i loved that one! why do people use that tone of voice when trying to get you into their product,etc. really weird. - Ed Jones, Tokyo.

MIke, it is not so much about getting good domain name, it's more about the be ranked high in the seach engine SEO now. so it seems Todd guys still live in the dot.com bubble age.
Ryo Kitahara

When I heard about it, I felt initial shock and then came to the conclusion..
"Well for sushi zanmai to fork out that much, they must've done it for the advertising."

But it didn't cross my mind it would be cheap advertising so thank you for the elaboration.

I wonder how many other companies bid up the price?

Meaning, they thought it was a good move too.

"I wonder how many other companies bid up the price?

Meaning, they thought it was a good move too"

Very good point but as Mike says, perhaps they bid against themselves to get it up to a world record price.

For what it's worth, I didn't hear anything about this story until I read this blog, so it's not as if it has reached mainstream news channels (I'm in the UK).

Still. it has definitely achieved some positive 'buzz' it seems, which is worth more than any TV spot or newspaper ad.