Cool and Strange Music - Just Who is Jack Trombey?


The reaction to the last Cool and Strange music (Cool & Strange Music - East Meets West Jan. 27, 2013) was quite satisfying to say the least. Thank you.

Actually it was almost all about a music genre that most people haven't heard of but they hear it everyday; it's called "Library Music." It's the kind of music that's used for background music on movies, TV shows and TV commercials. It's everywhere and some of the best music being made today - or at anytime in the days of film and mass media - has been made by "Library" musicians and composers. 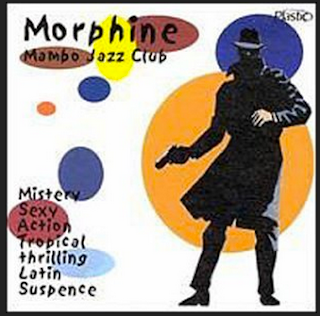 What really surprised me about the last Cool and Strange post, was that I have several inquiries concerning the Morphine Mambo Jazz Club... The majority of which were the questions, "Who are these people?" and "Where can I get their music?"

Well first off, if we can believe the liner notes in the CD (which I think we can't) it claims that the Morphine Mambo Jazz Club was a London Club in the sixties that inspired Julian Temple, the film maker, to make the movie entitled "Absolute Beginners" and David Bowie to sing the song with the same title...

Both were, well, pablum.... They pale in comparison to the real thing. And the compilation, Morphine Mambo Jazz Club is the real thing! 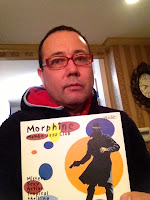 Folks, this album is an extremely rare highly sought after collectors item. Like I said, I have one (brag, brag, snort, snort!), but last I heard was that they were selling for a few hundred dollars each and you couldn't find them anywhere. I checked on Amazon too and I found it is unavailable. 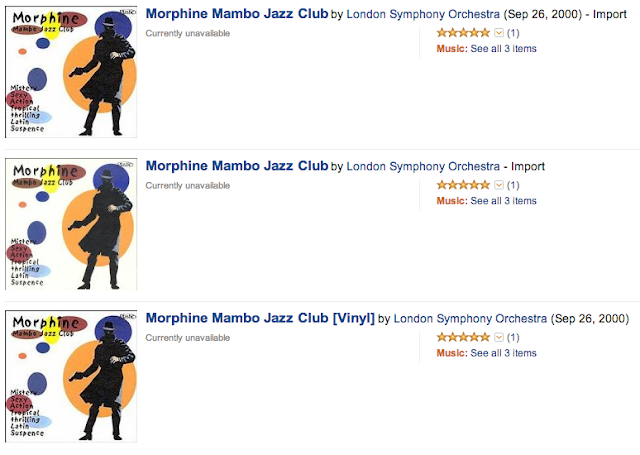 Unavailable, but as you can see, all 5 star reviews! Oh, wait a minute! That's probably the review I wrote, never mind!

If you commence a Google search for Morphine Mambo Jazz Club probably the best you can find is that this artist has something to do with a guy named Jack Trombley... So like the music and this post, if you are to search for answers to clues, you'll also find that, as far as Jack Trombley is concerned, he may or may not actually exist. Besides Jack, there's a few other "shady" characters, but I think Jack is the most intriguing of the bunch... Even though he probably doesn't exist...

Confusing? Yep. I'm not convinced, but many of us record-collection geeks think Jack Trombley is a pseudonym; a stage name.

Jack Trombey is also sometimes credited as T. Trombey and he is a British composer. Since I am not sure if he really exists (I mean, in that name). I am not sure he is still alive. Here's why: Jack Trombley composed pieces for Dewolfe Music, a production music library. Many Jack Trombley compositions were used in film and television productions such as Monty Python, Doctor Who, Van der Valk and Dawn of the Dead; so we're talking about stuff from the late 60s and early 70s....  Some suspect, and perhaps I do too, that Trombey is actually a pseudonym used by Ron Goodwin to compose for DeWolfe Music.

Ronald Alfred Goodwin (17 February 1925 – 8 January 2003) was a British composer and conductor known for his film music. He scored over 70 films in a career lasting over fifty years. His most famous works included Where Eagles Dare, Battle of Britain, 633 Squadron and Operation Crossbow.

But wait! We're not sure that Jack Trombey is Ron Goodwin so let's go back to the facts we already have that we know are definitely true.

World of Strategy No. 4

Here's what few clues and information I could get from Wikipedia about DeWolfe and Jack Trombey:

De Wolfe Music is the originator of what has become known as production music as it was established in 1909 and began its recorded library in 1927 with the advent of 'Talkies'. The library consists of over 80,000 tracks, all pre-cleared for licensing and synchronisation. They have been used in thousands of productions including Monty Python, Emmanuelle, Dawn of the Dead, American Gangster and Doctor Who. Well known theme tunes include Van der Valk and Roobarb....

...Music was also provided for classic episodes of Dr. Who, while in the 1970s De Wolfe scored The Sweeney, Monty Python's Flying Circus and cartoon theme tunes for Roobarb & Custard and Henry's Cat. Eye Level, the theme music for the television detective series Van Der Valk, became a million-selling number one single in 1973. To composer Jack Trombey’s surprise, Eye Level topped the charts for six weeks and saw Simon Park conducting his Orchestra week after week on Top Of The Pops alongside glam superstars Wizzard and The Sweet. It was the first TV theme ever to hit Number One, and proved so popular the Simon Park Orchestra actually outsold The Beatles in the UK for a whole week. (Emphasis mine) Much of De Wolfe’s music from that era has since become cult among record collectors and music enthusiasts all over the world.

What?! A Jack Trombey composition outsold the Beatles for one week in the prime of the lads from Liverpool? Astounding!

And, unfortunately folks, the trail on Jack Trombey grows cold there. I have been searching (along with my record collecting geek friends in the UK and Germany) for the answer to "Just who is Jack Trombey?" for over a decade with no luck... For now, all we have is this great music.

Jack Trombey! If you are still out there, give us a call... I know some folks who'd like for you to come down to the precinct office to answer a few questions about your whereabouts and the disappearance of a certain music composer....

And, with that, I'd like to leave you with this wonderful memory from the gang at Monty Python... What would they have done without Jack Trombey?....

Besides Jack, the album is filled with like-minded folks with great tracks. There's R. Tisley, Peter Reno, Keith Papworth, Frank Rothman, J. Hawksworth and W. Hill... Morphine Mambo Jazz Club... Find and grab it if you can!
at January 30, 2013

Here is what I found:

the opening theme of "90 minuto" the most popular italian football tv program is since the early seventies a jack trombey track, "Pancho". real name is jan stockaert, as said by mr.nobody.

While I'm glad to have a little more info on this I certainly more frustrated. Thanks for the post.

I gotta say this is one of the coolest posts I've come across in a while. Right up my alley. I came here because I've long wondered who did the 'king's quest' type music from Python's "The Holy Grail". Loved, loved that music and what it meant to the movie. I must admit when we went to Broadway to see the show I was so disappointed that none of that was used in Spamalot. Yeah, yeah, all new Eric Idle songs written I know, but I longed for this guy's stuff the whole show. Now that I've discovered his stuff through you I'm a huge fan. Again, right up my alley. As a composer it's a delight to come on something like this. Isn't the internet cool? Cool stuff!

I gotta say this is one of the coolest posts I've come across in a while. Right up my alley. I came here because I've long wondered who did the 'king's quest' type music from Python's "The Holy Grail". Loved, loved that music and what it meant to the movie. I must admit when we went to Broadway to see the show I was so disappointed that none of that was used in Spamalot. Yeah, yeah, all new Eric Idle songs written I know, but I longed for this guy's stuff the whole show. Now that I've discovered his stuff through you I'm a huge fan. Again, right up my alley. As a composer it's a delight to come on something like this. Isn't the internet cool? Cool stuff!

Jack Trombey was an alias used by Dutch composer Jan Stoeckart. He died recently, date given 13th of January 2017. He died at the age of 89. He wrote dozens and dozens of musical scores. Quite unbelieveable, up to 1300 compositions or more! Mainly for brass bands and orchestras. He wrote scores for Dutch films en he was employed by the Dutch Radio.

That's a small example. Not familiar by anyone, it sounds like a ripoff of a opening of a James Bond Movie.

The composition Trombones on parade is also a composition by Jan Stoeckart under the alias Jack Trombey. Julius Steffaro was another alias.