Pocket Notebooks: The Secret of Millionaires and People Won't Listen!?

I've read so many success books written by millionaires. These books about becoming a millionaire all say the same thing (basically): Hang around millionaires and successful people and copy what they do.

ELVIS COSTELLO - EVERYDAY I WRITE THE BOOK
OK. I started doing that. I'm lucky, actually, I do have friends and work acquaintances who are millionaires. Five of them to be exact.


Five good friends who are all millionaires and they all do the very same thing.


He also recommends carrying around a pocket-sized notebook. Pocket sized so that you can always have it with you in your pocket to write down your goals daily and things you think about or things so that you don't forget.


The notebook idea is also recommended by Napoleon Hill and Andrew Carnegie too (among others).


This notebook idea was recommended to me by some friends who started companies and built them into corporations that were listed on the Tokyo Stock Market and had earning in excess of $50 million dollars a year before they went public. Of course these guys earned millions when they sold their shares.


One day, I was at a meeting with one of these friends. He and three others all pulled out their pocket notebooks. I pulled out my notebook pad from my briefcase. I was impressed that all three of them each had a pocket notebook.


After the meeting ended two of them left. My former boss looked up and said to me, "Why haven't you bought a pocket notebook like the kind that I recommended to you?" (He was also the guy who recommended the Goals! book and to read the Napoleon Hill and Carnegie books too.) 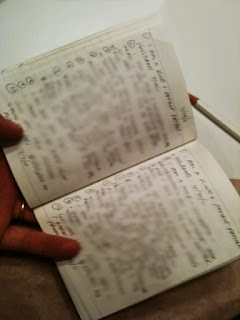 Been doing this now for over 4 years. It
really does work! Everything has come true!

Puzzled, I said, "I have a notebook!" I then showed him my B5 sized book.


He sighed and then said to me, "I gave you good advice. I know that you've read this same advice in the books I told you to read. You've been to meetings with me in front of other extremely successful people. Now why in the world do you not take such good advice because of ¥100 (about $1.00)?"


That hit me like a bullet right between the eyes.


He was right. Here was a millionaire giving me advice. I had read in several books how millionaires all had pocket notebooks. Yet I didn't do it. Why didn't I do it? I don't know, when I stopped to think about it. From the way he said it, it sounded like I was too cheap to use ¥100 to take the advice of millionaires.


I started using a pocket notebook about 4 years ago. I write down my Top 10 goals everyday like clock-work. I also always keep it in my back pocket and pull it out whenever I need it and write things down. I never forget anything anymore.


Now I see people who never take notes at meetings and do not have a pocket notebook. You can imagine what I think now.


I have written before about the value of writing your goals down everyday in One Step to Becoming a Better Parent and More Successful in Life:


I write down my goals every day religiously in the morning when I wake up and, not only does doing so help me to achieve them, it also helps me to relax and stay much more focused through the day. Who doesn't want to stay more focused in this day and age when our "in-box" includes, for most people, several e-mail accounts that are constantly filling up as the day goes by and consistently altering our priorities? Add on an Internet world filled with Social Media like Facebook and Linkedin accounts to attend? Twitter is no longer for just sending messages to your friends, but it too, has been co-opted into the business world and your boss orders you to use them, or blogs and SNS, to get the company message out...
How in the world can anyone today get ahead of the pile in the "in-box"? Any person in their right mind would be stressed.
.....let me point out that writing down your goals and purposes is like having a sort of road map to where you want to go. When you write them down, they enter your subconsciousness and they cause your inner brain to focus upon the Law of Attraction. If you do not write down where you want to go — if you do not have a map — then how will you know where you are going?


Excellent advice on how to get ahead by people who've done it. Now, when you think about it like that, what kind of idiot wouldn't take that kind of advice from millionaires for only a dollar?
at June 03, 2011

What type of pocket notebook do you use?

Good points about writing down goals—I know I've read elsewhere that simply having a to-do list makes one more likely to actually do the things on the list.

Plus, breaking down stuff we want to accomplish makes it easier to handle; I know when I think about how much I want to do, I become paralyzed because it's simply too much to think about. One small goal at a time is certainly good advice.

I just have a hard time getting into the habit of carrying a notebook around, so I make lists at home :P

Since I started investing, it has been smooth and no complain. But I still see people complaining that they have been scammed in ways or the other. I wonder why, Investing in binary trading (bitcoin mining ) has been so profitable to me. So I think I should introduce a group of persons a technological team SKYLINK TECHNOLOGY to you. who has come up with a way to mine bitcoin faster and conveniently and get your capital doubled in the 42 hours of your investment if you're interested. they are honest and I am still investing with them till today. You can reach him via mail: skylinktechnes@yahoo.com  or  whatsapp: +1(213)785-1553  or website: https://skylinktechnes.wixsite.com/info
or telegram group: https://t.me/hacksandinvestmenttutorials

Since I started investing, it has been smooth and no complain. But I still see people complaining that they have been scammed in ways or the other. I wonder why, Investing in binary trading (bitcoin mining ) has been so profitable to me. So I think I should introduce a group of persons a technological team SKYLINK TECHNOLOGY to you. who has come up with a way to mine bitcoin faster and conveniently and get your capital doubled in the 42 hours of your investment if you're interested. they are honest and I am still investing with them till today. You can reach him via mail: skylinktechnes@yahoo.com  or  whatsapp: +1(213)785-1553  or website: https://skylinktechnes.wixsite.com/info
or telegram group: https://t.me/hacksandinvestmenttutorials