More comments from the peanut gallery about Japan and Fukushima. In my post:

I slammed a guy named Gundersen and raked him across the coals for saying idiotic things about winds blowing radiation towards Tokyo:


"I have said it's worse than Chernobyl and I’ll stand by that. There was an enormous amount of radiation given out in the first two to three weeks of the event. And add the wind blowing in-land. It could very well have brought the nation of Japan to its knees. I mean, there is so much contamination that luckily wound up in the Pacific Ocean as compared to across the nation of Japan - it could have cut Japan in half. But now the winds have turned, so they are heading to the south toward Tokyo..."


This is patently false. The winds are not turning south. It is rainy season and monsoon season in Japan. This season has come to this sub-tropical area for millions of years this time of year. The winds do not blow from the north. They never have. They haven't done that since the beginning of time. They won't soon do that, either, in spite of how confused Arnie Gundersen and his fans are. Facts are facts.


Here is a Weather 101 lesson for you folks about monsoons:

Monsoons are an annually recurring weather phenomenon, triggered by the earth’s tilt in relation to the sun. Although they return every year, it is still impossible to tell the timing, duration, and quantity of rain each season, a fact that leaves impacted areas without accurate storm information. Monsoons are set by land and sea temperature differences. Land reflects the sun’s rays, heating air over land more rapidly. Water is able to absorb a lot of heat without itself changing temperature much, so air over water stays relatively cooler.


This fact is prevalent in Asia because the northern hemisphere has so much more land than the southern hemisphere, which is mostly ocean. During the summer, the earth is tilted at such an angle that the sun’s rays shine more directly on the northern hemisphere. The heat is absorbed by the land masses, warming the air above it. The hot air rises, and cooler ocean air rushes inland from the southern hemisphere to replace it. (emphasis mine) As it moves, it carries moisture with it, releasing it over land as the summer monsoon (also known as southwest monsoon). The cycle continues as the cooling air creates precipitation and releases more energy. This energy then heats the air, which rises and flows back to the sea, cools, descends, and rushes back to land to replace more warm, rising air. This monsoon is centered over continental Asia.


So, unless the sun suddenly decides to change its position, or the world tuns upside down, this will always be monsoon and rainy season in Japan and, as such, the rains and weather patterns will come from the south.


Even with these facts some people still write foolish comments on this blog that are not verified by data, science or facts on the ground:

"A couple of wind balls!?" "Sooner or later winds will from Fukushima will pass over Tokyo!?" How very scientific (and hilarious). Do you have any idea how far Tokyo is from Fukushima?
Do you know that, besides running the length of the Japanese islands, one of the highest and largest plateau of the Japanese Alps runs between Tokyo and where Fukushima lies? I'm sure that there are "wind balls." But, like with most weather patterns, mountainous terrain will alter them.


Do you know that, if you stood outside continuously sooner or later you are going to be hit by lightening or a meteorite too, my friend? If I keep buying lottery tickets, sooner or later I will win.

Here is a map from Yahoo! Japan Weather that was taken in the last ten minutes. I don't care about your "wind balls," the wind from Fukushima is NOT blowing over Tokyo and they never will. From: http://weather.yahoo.co.jp/weather/wind/

This next map should put this "winds are blowing south towards Tokyo" lunacy to rest (I can hope, can't I?) 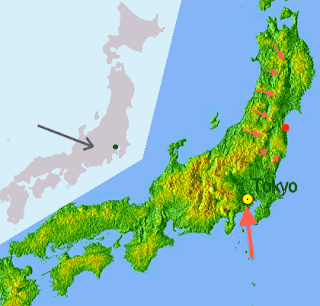 Red arrows denotes part of northern side of Japan Alps. Yellow relief shows highest mountainous regions. Red dot is Fukushima nuclear power plant. As you can see, Fukushima is on the opposite side of Tokyo from one of the largest mountainous plateaus on the entire Japanese archipelago. Also, in spite of what all these maps say, the area marked as "Tokyo" is not Tokyo. I have put a yellow dot where Tokyo really is and marked it with an arrow. Someone send this along to Gundersen... Besides meteorology, he needs a lesson in geography too.

Class is now dismissed. Gundersen and the rest of his failure students stay after school and write 500 hundred times on the blackboard, "For millions of years, winds have never blown from the north-east in Japan - regardless of the season - they never have and never will. "

Want to read more comedy from this Gundersen guy? Read this and click on the link:

Arnold Gunderson, a 39-year veteran of the nuclear industry, stated: “I absolutely disagree with the scientists who say that Fukushima’s not going to hurt anyone. The numbers I’ve seen, from reputable scientists, are that Fukushima is going to kill 200,000 from increased cancers over the next 50 years.”
http://gramercyimages.com/blog1/2011/04/25/fukushima-radiation-a-soft-kill-operation/

As my friend, Andrew Woolner of "JP Quake Info Wall of Shame" says:

I love how he (Gundersen) talks about "reputable scientists" but never names them. Pretty much everyone in the anti-nuclear scene subscribes to the now discredited idea of "internal emitters" and the idea that heavy particles get stuck in one place in the body and cause a lot of damage to one area.

That link, by the way is hilarious. Yeah, watch out for the "globalists" and their "soft-kill" operation...

Mike--
I stumbled across your blog here, and immediately ascertained that you are obviously a great genius, and clearly the world's only man who 'correctly understands' the situation... so I thought you might be able to explain something to me:
If, as you say,

<< The winds do not blow from the north. They never have. They haven't done that since the beginning of time. They won't soon do that, either, in spite of how confused Arnie Gundersen and his fans are. Facts are facts.>>

then why, exactly, is there produce contaminated with Cs-137 growing all around Tokyo (and, in fact, far to the south of Tokyo)?

Perhaps you could enlighten me, oh Great One.

BTW, you piqued my curiosity, so I just took a quick look at the forecast for Fukushima, here:
http://www.weather-forecast.com/locations/Fukushima/forecasts/latest

You might want to call them, and explain that this is 'impossible.'

Have a nice weekend.

I just linked to the weather maps. They show the wind direction. It should be simple to read them. Wind might be blowing a bit south at Fukushima off the ocean towards the moutains (where they stop) but the weather maps do not lie. See article.

As far as Cesium south of Tokyo, the origins of this matter are in dispute. The Kanagawa water records show no cesium. Now, that's a real head scratcher: http://atmc.jp/?n=14

How is it possible to have this in tea, yet not in the water? The most plausible explanation is radiation left over from cold war bomb tests.

I, as the great and all-knoweing one (that you so wisely acknowledge) examined this possibility here: http://modernmarketingjapan.blogspot.com/2011/05/nuclear-panic-time.html

That this radiation you claim is from Fukushima is purely conjecture. I have proof of these nuclear tests.

Tokyo is over 230 kilometers from Fukushima, the winds from Fukushima do not blow over one of the biggest, highest and widest mountain ranges in Japan to Tokyo.

PS: Using your own narrow view of Japan (as if it's just some tiny blip on a map( Here's your wind direction for Tokyo (on the other side of a mountain range and 230 kilometers away: http://www.weather-forecast.com/locations/Tokyo/forecasts/latest

Hey! Funny that! The wind is blowing from the south.

I, the all-knowing wise one have spoken.