That's right. You read that title correctly. A chart released by the giant blood sucking vampire squid, Goldman Sachs, says that when you combine "government, business, banking and household debt, the true scope of a country's obligations." This chart is truly shocking.


But first, watch this video of a sinking ship and you'll get the idea of what I'm talking about here:


You back? OK. Well, the video is relative because, first; the passengers are oblivious to dangers coming (the passengers represent us "the people"). Second; when the ship started sinking, the captain and crew were splitting. The captain & the crew represent our politicians and bankers.


Not a pretty picture. People going along, as usual, in their ignorant bliss. The "leaders" knowing full well what's going on but trying to get out with what they can, while they can! The only difference between the sinking ship and the economy is there won't be any rescue coming for us.


While the entire world watches Greece and Italy, it seems, from looking at this chart, the real action is the UK, Japan, Spain and France. 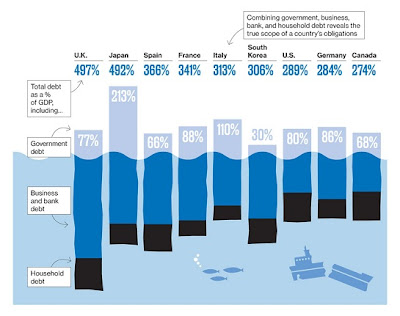 Business, government and household debt in Japan show a 492% of GDP problem for Japan. The tax and spend days are coming to an end soon in Europe, the USA and, of course, in Japan.

This entire house of cards is going to collapse around our heads. When the collapse does come, it will come suddenly. Hope you have cash readily available and at least a few weeks of food and water ready. Because when the crash does come, stores will be empty in a matter if a few hours - if it takes that long.

A reader sends in this video. Kyle Bass on the BBC saying that Japan is "next":

What do you think of this video (especially approx after 14:50 min.):

He basically says that of all the governments melting down, that Japan is next. That the Japanese central government spends about 50% of all tax dollars paying the interest on the debt. If this goes up only 2%, then more than every yen in taxes will be needed just to pay the interest.

Mike, the person speaking in this interview was most interesting and seemed quite savvy. It was very unusual to hear someone speak with clarity and in a detailed way, even discussing specifics of his trading strategy.

Sadly, the hectoring interviewer kept interrupting him before he could complete his thoughts.

I'm sure he would have made a number of other insightful points about Japan, but the interviewer lady was more interested in hearing herself speak. What a shame the media is populated by people like her who are so disinterested in helping the public hear the truth.

Criticizing him for insuring his client's portfolios was ridiculous and simply showed her own ignorance of economics.

Is it Karl Bass or Kyle Bass?

Oops! Kyle! I think Karl Bass is a baseball player or something.

As to the reporter, it seems that every reporter at "Aunty Beeb" thinks that the way to advancement is to try to emulate the adversarial style of Jeremy Paxman, who is probably the most popular and respected reporter at the BBC. Unfortunately, I don't think most of the reporters have the experience, ability, or intellect to pull it off...