Every morning, like clockwork, I turn on my computer to do work and to write this blog. Every morning I see something on the top page of Yahoo that just makes me roll my eyes. (Yes, I know everyone uses Google, but I use Yahoo to get the financial and stock market news).


Everyday, at the top of the page, Yahoo has their 5 "hot" stories. These are always incredibly stupid and useless. Usually it is about an unusual football play (when, upon clicking, you see that it is not so unusual at all)... Or it it about some idiocy involving some Hollywood person getting a divorce or the dress s/he is wearing or something else. 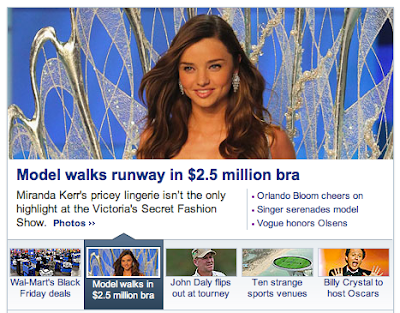 
In a few words, God! American society is stupid!


You know this stuff is there because Yahoo is "giving people what they want"... There is never any news about anything that actually matters.


But sometimes, even Yahoo can have something so stupid, so asinine that it irritates me to hell. Yesterday had a link to the person who does the tanning for the people on "Dancing With the Stars"! Jesus! I just have to read about that!


The article is just Hollywood fabulous. Let me quote:


Each season of "Dancing With the Stars" features a revolving line-up of contestants and professional dancers, but one thing remains the same: spray tans are a big part of the show. And that's where Julie Nostrand, the owner of South Seas Skin Care, comes in. All season long, she's spent every Sunday flying from Loveland, Colorado, to Los Angeles, to ensure celebs look luminous in the ballroom and in front of the camera. omg! caught up with Nostrand to find out more about what the stars do to get glam.


No wonder the USA is all f'ed up. Ask Anyone says the average American watches 6.7 hours of TV a day!!!!


How, in the hell could anyone spend 1/3 of their waking time on TV?


But for more, er, "serious" info let's go to our Neilsen ratings:

According to the A.C. Nielsen Co., the average American watches more than 4 hours of TV each day (or 28 hours/week, or 2 months of nonstop TV-watching per year). In a 65-year life, that person will have spent 9 years glued to the tube.

The average child will watch 8,000 murders on TV before finishing elementary school. By age eighteen, the average American has seen 200,000 acts of violence on TV, including 40,000 murders. At a meeting in Nashville, TN last July, Dr. John Nelson of the American Medical Association (an endorser of National TV-Turnoff Week) said that if 2,888 out of 3,000 studies show that TV violence is a casual factor in real-life mayhem, "it's a public health problem." The American Psychiatric Association addressed this problem in its endorsement of National TV-Turnoff Week, stating, "We have had a long-standing concern with the impact of television on behavior, especially among children."

Millions of Americans are so hooked on television that they fit the criteria for substance abuse as defined in the official psychiatric manual, according to Rutgers University psychologist and TV-Free America board member Robert Kubey. Heavy TV viewers exhibit five dependency symptoms--two more than necessary to arrive at a clinical diagnosis of substance abuse. These include: 1) using TV as a sedative; 2) indiscriminate viewing; 3) feeling loss of control while viewing; 4) feeling angry with oneself for watching too much; 5) inability to stop watching; and 6) feeling miserable when kept from watching.


What's to watch on TV? Nothing good.


I heard from my friend who works at NHK that recent surveys in Japan show that the average Japanese under 30-year-old watches an average 20 minutes of TV per day.


If these statistics are true then the USA is definitely done for. People in the USA no longer read books, they don't know their basic geography. They don't know the difference between John and Yoko staying in bed to protest the war or Lenin doing the same. They think Falafel is a political party in Pakistan and the people in Eye-rack had nooklar weapons.


They think Mexico is in Central America even though Central America doesn't exist... And, they think Napoleon is an ice-cream sundae at 31 Flavors. They couldn't pick out "Grease" on a map of Europe and don't care about "Cheese eating surrender monkeys" anyway.

The night closes in. Read the surveys of what children know, what students in universities know. Approximately nothing. We have become wanton morons. As the intellectual shadows fall again, as literacy declines and minds grow dim in the new twilight, who will copy the parchments this time?


No longer are we a schooled people. Brash new peasants grin and peck at their iPods. Unknowing, incurious, they gaze at their screens and twiddle, twiddle. They will not preserve the works of five millenia. They cannot. They do not even know why.


Twilight really does come. Sales of books fall. Attention spans shorten. Music gives way to angry urban grunting. The young count on their fingers when they do not have a calculator, know less by the year. We have already seen the frist American generations less educated than their parents. College graduates do not know when World War One happened, or what the Raj was. They have read nothing except the nothing that they read, and little of that. Democracy was an interesting thought.


Ours will be a stranger Dark Age than the old one. Our peasants brush their teeth and wash, imagine themselves of the middle class, but their heads are empty.


We are witnessing the end times for the USA as we've known it for all these years.... It's too bad that, when the drunken giant in the room finally collapses, his fall is going to break everything on everyone else's tables.
at November 11, 2011

I've noticed the same thing about the headline stories and it isn't just at Yahoo where this sort of thing takes place.

My view is that this phenomenon is an effort by the ruling elites and their media stooges to distract people from the financial ruin, wars, corruption, and other disasters caused by government.

It's bread and circuses for the masses. Get them to look here at pop culture, not there at the things we want to hide.

So the dopey headlines may be partially a reflection of the dumbing down of USA society, and also an intentional effort at political manipulation.

What do you think?

It's hard to get Grease off a map, its a pretty permanent thing. Greece is an entirely other thing however.

Uh, I hope Anonymous knows that the reference to "Grease" was a joke. Was just wondering how I could reference John Travolta when referring to Greece.

I agree with you this time Andy.

Ease up on the "they"s. There are over three million people in the United States. We don't all subscribe to this nonsense. There are shitheads everywhere. Unfortunately, ours are on TV.

You can't learn about the current state of America from American TV. Not from garbage like Yahoo or AOL news either. Look elsewhere if you're actually interested.

Don't look now, but there are over 307 million people in the USA. Not 3 million as you wrote... What was I saying about the US education system?

Nothing but negativity from this blog. I made a typo. Geez.

ROTFLMAO! How is 300 million and 3 million just a typo? Dumb Americans!

Dear Ed,
One: If you bother to read, you'd know that I have been a columnist for Lew Rockwell since 2004 and am a hard core advocate of alternative media since, I'm sure, most people were even aware of it. I do own an Internet company too! If you bothered to check what I did for work, or my brief bio, I sure you'd think twice before making such nutty insinuations as: "Look elsewhere if you're actually interested." As if I am not interested.
Two: I doubt you made a typo. Either way, I sure hope you don't handle your check book balance the way you make typos. Big difference with two missing zeros, no?
Three: "Nothing but negativity from this blog" ? Typical sweeping generalization when someone hasn't a good argument to defend themselves with. Lame.

All of the points you made in your post were valid. American mainstream culture can be ridiculous and we have a lot of problems in this country. I would likely have made similar complaints.

People see the fundamentalists, racists, gun enthusiasts, spray tan trash, etc.. and they get a skewed impression of the USA. Yes. These people are here. But they are not everywhere and they do not represent all of us.

You can find any kind of person here. Wherever you are, there is probably a group of people who you can relate to. There are a lot of people here who don't subscribe to cable TV. It's a bummer when we all get lumped in with the trash. There are countless pockets of unique and valuable culture here. You know this.

I don't mean to come on here and attack you. I appreciate your perspective as an American in Japan. I just don't think your analysis about Americans is fair. To me, it's a very American breed of hate and stereotype that I'm all too familiar with.

I'm probably being too harsh, but do you see what I'm trying to say here?