Sorry for the misleading title. There is no Thanksgiving in Japan. Well, not at least, at most folks homes. We have turkey around this time at my house every year, though.

I just received an email from my dear uncle who lives in North Carolina, USA. As older folks do, he told me of his ills and he also wished for us to have a good Thanksgiving.

Thanks uncle. I hope you and aunt have a healthy and happy holiday season.

Like I said, there is no Thanksgiving in Japan but we have a turkey. We had ours yesterday. We have it every year on 11/23 which is some sort of Japanese holiday. Japan has a lot of holidays. American people think they take it easy, and they do, but Japan has holidays all the time.

Most foreigners, like me, know that the day is a holiday, but we have no idea what the holiday is. Japan has holidays for old people, working people, children, the emperor's birthday, first day of winter, perhaps summer and besides newspaper holidays, we have a holiday for newspapers (or at least, that's what I thought it was!) 春分 is Shunbun (Vernal equinox). 秋分is Shuubun  (Autumnal equinox). 新聞 is Shinbun (newspaper) so when I first heard "Shunbun no hi" (first day of spring) I thought people were saying "Shinbun no hi" (newspaper day).  Get it? Shunbun, Shuubun and Shinbun. They all sound the same! "Newspaper day? What a bizarre holiday!" I thought (Don't think I'm so stupid, many foreigners thing the same thing! Or is it just that all my friends are as dumb as I am?)

The problem with Japanese holidays is that everyone goes on vacation at the same time too. So, during holiday season, the best place to be is home. Hopefully one's home isn't so crowded (though, sometimes, two people can be a crowd!)

Japan doesn't have a Thanksgiving because the Japanese didn't wipe out a bunch of Indians and then try to cover their tracks by making a Holiday that looks like white man and the Indians were good old buddies. They weren't. In Japan there were no Indians but the Japanese also had their little expeditions in Okinawa several hundred years ago and in Ezo (now Hokkaido) a few hundred years ago... So if the Japanese did have a Thanksgiving, I suppose, instead of a turkey, they roast a fish or something.

Also, space is a premium in Japanese homes so no one has a big oven like they do in the USA. We have an oven though. A 14 pound turkey is really about as big a turkey as our oven can take. So that's what I roast for the family every year.

I wrote back to my uncle and told him that I roast a turkey every year. I also mentioned that I do this because I want my children to recognize that there are some good things from America and nice traditions that I'd like them to know about. Christmas is celebrated all around the world.

Thanksgiving is, just about, the only tradition from America that I do want them to know about.

Thanksgiving is nice because there are no presents. You don't feel like you have to buy any presents for people you don't really like (so you wind up buying some junk or cologne at the last minute). Or some other occasions when you have to get together with people you don't like either.

Thanksgiving doesn't exist in Japan. But we get together and enjoy good food with family and friends...

Happy Thanksgiving to all of you.

May the holiday season see you and yours healthy and prosperous. 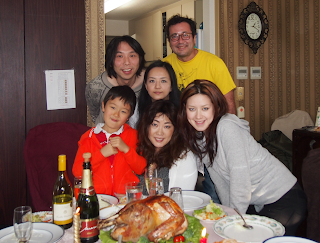 You should read up on your Japanese history Mike. Especially the history of the Ainu people, aka the people native to northern Japan, and the discrimination they faced and still face in the Japanese society.
Here, I will help you out: http://en.wikipedia.org/wiki/Ainu_people

Actually Mike did mention "Ezo (now Hokkaido)" in his piece along with Ryuukyu/Okinawa. Perhaps he didn't go into as much detail (genocide, ethnic cleansing, etc.) as you would have liked.

The man was probably celebrating something or other and forgot to include the negativity.

I hope you, and your family had a joyful time, with much more joy in the future!

Thanks Everyone. The article is about Thanksgiving. I clearly mentioned about Ezo and Ryukyu. Thanks. If I want to write about Japanese atrocities, Anonymous #1, I would need a much longer forum than a mere blog post. As far as asking that I study Japanese history, I most certainly have. Here is an article that I wrote in 2004 about the Ainu: Ezo Indians. Once again, probably not that bad of qualifications. Defintely poor writing skills, but much more studied than most on this particular subject. Thanks for helping me out! Luckily for me, someone really smart once said "You're remembered for what you say, not how you say it."