The stock market had a real bad day today because of Eurozone and Italy worries and things there are going to get worse. Nevertheless, after Groupon's IPO, even with the Bear Market rallies, Groupon has been a loser three days in a row. 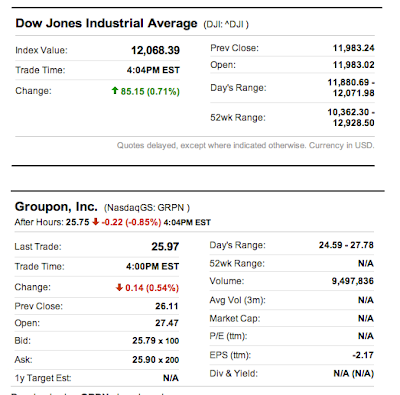 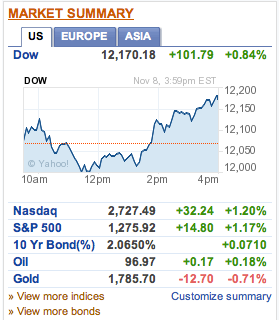 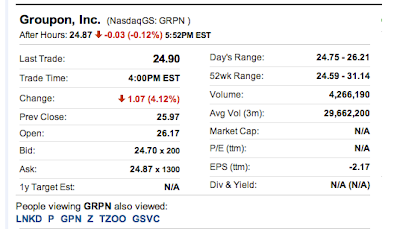 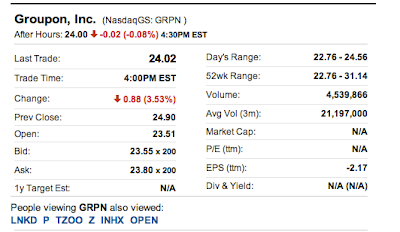 In three days, Groupon shares have lost 14% of their value. I predict Groupon is heading for penny stock within 2 years. This is a serious opportunity to short this company stocks.

On top of that, the news is all bad for Groupon. From the Wall Street Journal just today!:

Merchants Grumble Over Groupon Late Payments
Competitors are threatening the daily deal site leader by offering quicker payment to merchants, possibly jeopardizing a key part of the company's business model.
Groupon, which offers online deals for local merchants, keeps itself in cash by collecting money immediately when it sells its daily coupons to consumers while dragging out payments to the merchants over 60 days.
As I have said many times before, the Groupo business model won’t work. All business deals, in order to be successful, must be beneficial for all sides concerned. The business owners who make deals with Groupon lose out big time.
From that same article:
"The payment timing is so erratic you can't count on any of that money helping to pay your bills," says Mark Grohman, owner of Meridian Restaurant in Winston-Salem, N.C.
After running three Groupon promotions this year and last, Mr. Grohman says he won't use the service again in part because it puts too big a strain on his cash flow. "With smaller margins in restaurants, you need that capital in the bank as fast as possible," he says.
Heissam Jebailey, co-owner of two Menchie's frozen-yogurt franchises in Winter Park, Fla., says he also has begun to view Groupon's installment payments as too slow.
"You want to get paid in full as quickly as possible," says Mr. Jebailey, who has run deals with both Groupon and its rival LivingSocial Inc. offering customers $10 of frozen yogurt for $5. He says both promotions were successful but that he'd only use Groupon again if the service promises to pay faster. "We're the ones that have to cover the cost of goods for giving away everything at half price," he says. "I will not do another deal with Groupon unless they agree to my terms."


Here's a video from Market Watch that came out today, too. Groupon's Payment Lag Irks Merchants:
at November 10, 2011

Droop on! Garth!
Droop On! Wayne!