Banzai 7 Goes to the Fraud-Lympics in London

From Zerohedge, William Banzai has a true to form, realistic take on the scam the Olympics have become. The day where "Olympic athletes sacrifice and dedicate to their sport" is long gone (it it ever really existed  and has been replaced by policial, social, and nationalist goals (as well as crass consumerism and glorification of the state) and, ahem, big money. (Psst! Those athletes winning anything is not for you or "your country" it is for advertising revenues! pass it on!)


Nah! Don't believe me, please refer to "Olympic Games Scandals and Controversies" where the sneaky business has been going on since, oh, 1908....


William Banzai, though, has a great take (as always) and a bunch of very well done and funny cartoons over at ZeroHedge. This is my favorite: 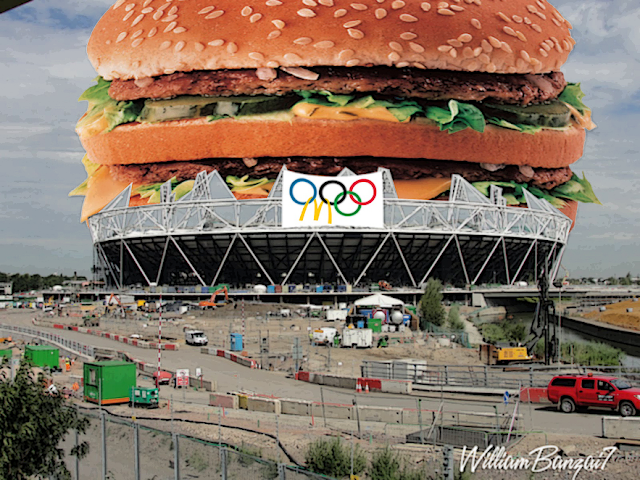 Go to Zerohedge to see all the rest of the images in their full Banzai 7 glory!!!!


Question: When that athlete crosses the finish line first for Olympic gold what is the first thing that come into their mind?


A: "I did it for my country and people who I don't even know and will never ever meet."


B: "Alright! Now I get that juicy sports sponsor contract and millions of dollars... I'm rich!"

Just like the gladiatorial games of ancient Rome. A way to keep the masses entertained and not focused on state tyranny.

Don't think athletes are going to become rich. That seems to be an american thing, in most parts of the world, olympic medalists earn WAY less than team sports people (think soccer, NBA, NFL) and still less than almost all lawyers. And they DO work their asses off.

I don't believe every athlete thinks that way.. certainly there are hundreds who are there just for the chance to compete because they simply aren't in the TOP 3 or 5 or 10 of their sport.
But the folks winning Golds? Well... these guys are already rich. I think it;s only the ones in the prestige sports like the 100M, Decathalon (is that prestigious? It was when American Bruce Jenner was doing it - for Americans).
No one in Canada is getting rich from a Gold (in Canada)... Europe often holds bigger bucks for Olympic winners. In the US - winning a Gold will get them some money... but NOT as much as you might think. Is an athlete winning a Gold in Handball, Archery, the Javelin cashing in big time? No.
These days, athletes are professionals - at least the top ones. Cheering on an athlete from Tonga - sure - a real amateur. US men's basketball, Russian tennis? Naw...
Still... I don't really have a problem with the athletes making some coin. Look... these folks have just become recognized as the best of the best in the world in their chosen sport. Why shouldn't they make a million bucks if they can get it? Training, dedication, diet, sacrifices by the parents - there's plenty of things people do... look at MY blog http://wonderfulrife.blogspot.ca/2012/07/japanese-olympic-athlete-does-nude.html ... these people aren't rich! They do what they have to do to get the chance to win.
Yes... the Olympics are a corporate event - ever since 1984 in L.A. That's when the Olympics MADE money. Russia - lost, Canada in 76 - lost... Munich - no clue, but what a tragedy....
Still... I like the cartoons.
More importantly... HOW DID YOU get that ANSWER Upside down in the blog??!!