Japanese politician tells the truth on his blog that "70% of the public is against a Sales Tax increase." 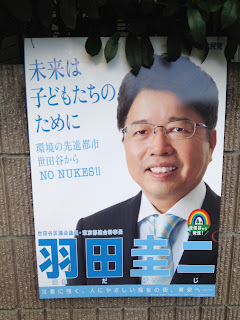 Here's a quick translation from the blog of politician Narita Keiji of July 15, 2012:


Outside in the summer heat, it was exhausting. From morning to afternoon, a 100,000 person was rally held in Yoyogi Park. Brings together many have been expected among the climax of the Goodbye Nuclear Power movement. Please hurry and go out to join us.

Later that night, we held a rally to "Stop the Consumption Tax Hike." This is a coordinated action with the public and volunteer councilors that has taken place all over the metropolitan area, today it arrived in Setagaya at the Carrot Tower near Sangenjaya station.

Unfortunatley the weather became bad and strong winds forced us to close the meeting early but still many people showed up to gather flyers about the movement to stop the Consumption Tax increase…. There were many people with questions and anger about the talk of the tax increase.

70% of the population was opposed to the consumption tax hike….

I've mentioned before that I thought surveys of the Japanese public that showed only 58% opposed a Sales Tax increase must be false (or they survey a high percentage of people on the dole)... I haven't met anyone who was positive for any tax increase at all.