I getting a lot of feedback from Japanese friends that they are getting "burned out" on Facebook and that they are beginning to think it is a waste of time and boring (that was fast!)

Many are complaining about boring posts from friends like photos of what people had for lunch or their desserts... Or pictures of their kids...

It gets tiring. Like I said, I'm sensing a loss of excitement in Japan over Facebook. When the average Joe-Suzuki loses interest so fast, then that spells problems in Japan.

Besides that, Facebook can't make any money on their website. Their big plan to save the company rests solely upon the notion that their mobile platform will generate enough revenues to pay of the party.

Sorry, folks. No way. No one has figured out a way to make mobile advertising work. Facebook isn't going to be able to do so, either.

Facebook finishes the week down (and another drop after hours)

I don't really mind ads on my PC or Facebook (I never click them, either) but, on my iPhone, with the small screen, the last thing I want on there is advertising. Space is a premium on a mobile phone screen and I can't imagine that anyone wants to see advertising on that small space cluttering up the view.

It's hard enough to see what's on the screen as it is without pop up ads and more noise.

Facebook is not going to be able to figure out how to make mobile advertising work... I doubt that anyone will for a long time, if ever.

Nevertheless, people are still hoping for better results from Facebook.

From Motley Fool: A Fool Looks Back:

Despite the chatter that the social-networking website is fading in popularity, having a whopping 955 million monthly active users is a 29% increase over the past year. And despite concerns about mobile and monetization in general, revenue growth at a 32% clip shows that the company is making more money per user.

Right! Never mind the fact that research shows 40% of all Facebook users are Spammers. From 40% of Facebook's Supposed 900 Million Users Don't Exist:

Spammers create as many as 40 percent of the accounts on social-media sites, according to Risher. About 8 percent of messages sent via social pages are spam, approximately twice the volume of six months ago, he says. Spammers use the sharing features on social sites to spread their messages. Click on a spammer’s link on Facebook, and it may ask you to “like” or “share” a page, or to allow an app to gain access to your profile." 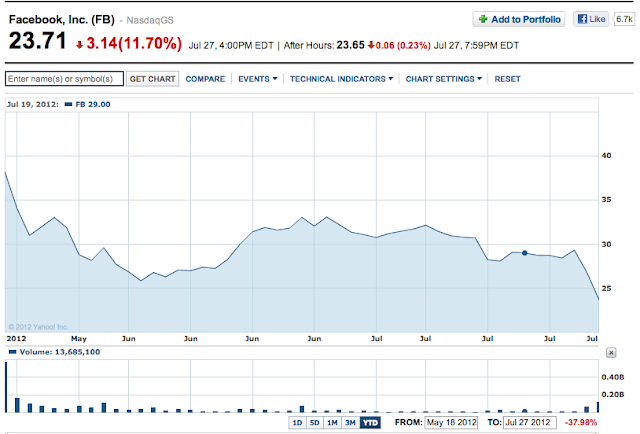 
But what about Facebook's other success stories, you say? OK. How about Zynga, the Facebook game that many said was one of the high points for Facebook? Yeah. That's a Cinderella story. From Reuters:


Zynga shares have fallen 70% since its December 2011 Initial Public Offering. The investigation stems from concerns that Zynga misrepresented and/or failed to disclose materially adverse facts about its business and financial condition. Furthermore, certain Zynga executive officers sold a combined 43 million shares of Company stock during the second quarter of 2012, shortly before Zynga reported poor financial results.

"As for my price target on the company I will simply note that there is very strong technical support at $0."

Hey Mike... I have never seen a use for Facebook - except for friends - real friends and family to share what is going on their life. It's the false friend thing that I find annoying.
My wife has been on Facebook for a couple of years and she is tired of people she doesn't know sharing facts about how great life is. That's her problem for accepting people as friends when she doesn't know them.
I'm curious as to what your views are on Twitter? I've seen a rise on my blog's fortunes that corresponds to me using it - but nothing immense. I also don't have time to go through the 400 tweets I get an hour. Does anyone?
Does anyone actually SEE and act upon my tweets and open up the links? I do - when I can - for others... but it's impossible to do for everyone - and thus I pick and choose.
Re: ads... I know where the ads are on any given website and have NEVER clicked on an ad unless it really was for something I was looking for... so... three times in the past 19 years I've been on-line? I don't see how people make money from advertising on-line. Of course... I work for a magazine.... and have my own agenda.

More proof Mike is on to something. From: "Company withdrawing from Facebook as analytics show 80% of ad clicks from bots"

"Bots were loading pages and driving up our advertising costs. So we tried contacting Facebook about this. Unfortunately, they wouldn't reply.
...
They said they would allow us to change our name. NICE! But only if we agreed to spend $2000 or more in advertising a month. That's correct. Facebook was holding our name hostage."

Fb won't do much for the bots since they are moneymakers for them. However, the $2k for the name change seemed pretty desperate.

It turns out those "bots" are sometimes a special type of human:

A booklicant is a Facebook user who consistently clicks on dozens of ads in a day, perhaps 4 or 5 in a minute, adding up to hundreds or thousands of clicks per year. They do this for various reasons that are generally unrelated to typical click-based online advertiser expectations...

From: Do Not Advertise On Facebook Until You Read This

In other words, bot or human, the value of the click is worthless. Fb and others got people to click on ads, but w/o the intention of buying anything.

There is a more detailed discussion about the article here: http://news.ycombinator.com/item?id=4315660

When you are going into bankrupt that would be the worst thing happened in your life.