Japan's Deflation: The Department Store Numbers From 2009 to June 2012

I've been doing a lot of data searching and number crunching for the purpose of making presentations for a new Japanese company to obtain government funding. I sometimes help new companies and entrepreneurs to gain government loans and financing as the rates from the government of Japan are incredibly low, and, if the company goes bankrupt, in many instances, the entrepreneur does not have to pay back the loan as it is government backed. Wow! Free money, right?


Well, it is not as easy as it seems; the presentation must be extremely thorough and, when making a profit and loss chart, every single number input must have some justification and rationale.


In order to help make a realistic profit and loss three year sales projection presentation I searched the Japan Ministry of the Economy, Trade and Industry site for information on sales for typical bricks and mortar shops.


While doing so, I found information for department stores which I deemed to be very good (to cast things in as positive a light as possible) as Japan's department stores are world famous as a barometer of the shopping and spending habits of the Japanese. Also, since the department stores are very geared to a slightly older and a bit more upper and middle class spenders (rather than young people who are not big spenders), I felt it would represent true Japanese society better. Meaning; it will represent people with money, not those without.


What I found greatly surprised me. Here's the chart and a brief explanation of what really stands out below; 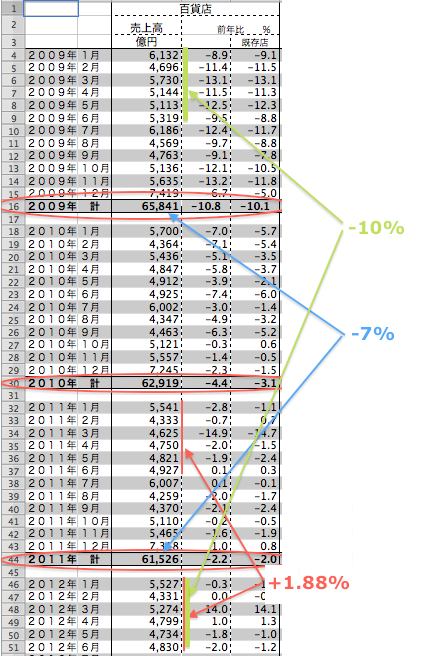 Data from the Japan Ministry of the Economy, Trade and Industry


In the red circles are the final tallies for sales for each year. Comparing the final annual sales numbers from department stores from 2009 to 2011 show a full -7% drop in revenues and spending by customers (as indicated by the blue arrows). We don't have full data for 2012 yet, of course, but if you compare YoY from 2011 to 2012 it isn't so bad as sales are up +1.88% for the first six months of 2012.


Now some will say, "Not so fast, Mike! This doesn't represent online sales which have grown. And yes they have. But still consider that, according to Nikkei survey results show that only about 60% of all Japanese households have a PC. This points to a still strong market for people to shop bricks and mortar in Japan... And, actually, isn't going out and shopping half the fun?


But let's compare just for fun... Let's look at the dominant player in Japan's online sales and that is Rakuten. Rakuten is Japan's #1 (maybe #2) online "department store." Here are figures from Rakuten's annual sales reports for the sample years of 2006 ~ 2011: 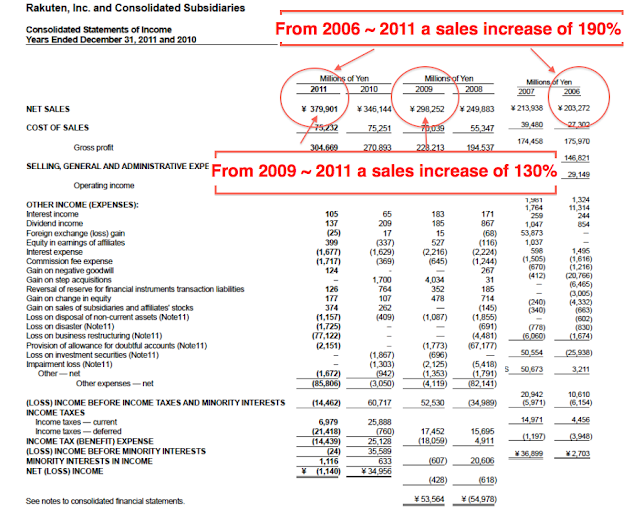 
Sales from 2006 to 2011 showed a brisk increase. It slowed down greatly from 2009 to 2011 (which was a bad year all around for department stores and the economy as a whole). Yet Rakuen still showed a healthy increase. Still total annual department stores sales in Japan are well over 173 times that of Rakuten... So, when the department stores are dropping 10% a sales increase of 130% from Rakuten is a drop in the bucket...


I must add one point too, I go grocery shopping three times a week. I keep close track of food prices (in my world, that's one of the few things that matter). Prices have held steady or dropped over these last few years.


Couple that with the price of land (I keep and eye on that too) there can be no doubt that Japan is mired in deflation as land prices where I lived have dropped ever so slightly and that even with a brand new giant shopping center built within 12 minutes walk from my house just one year ago.


Things do not look well in the Japan retail market at all... Or anywhere else in Japan for that matter.
at July 25, 2012

Well increasing the VAT will make things worse. Hay I here self called economists say that there is price deflation in Japan. Is there any truth to that?