I warned people in November of 2011 to get out of Groupon in Groupon Stock Holders! Head For the Exits! when the share price was over $23!

But maybe there's some good news for investors in there?

In addition, a Citi Investment Research analyst expressed some concerns about Groupon's exposure to Europe and its weak economy.

Exposure to Europe, yeah? Well, that can't be good! But maybe there's a silver lining?

Groupon continues to underperform the group. This is the second time this month that the stock has tumbled. On July 2 shares slid on news that Groupon Chairman Eric Lefkofsky was taking a step back from his role at the company. It's discouraging to see a Groupon co-founder turn his back on the company at such a critical time. In hindsight, Groupon shouldn't have turned down a possible takeover by Google (Nasdaq: GOOG  ) for a rumored $5.3 billion.

However you cut it, things don't look good for the daily deals site. Concerns over the financial health of the business are nothing new. Not only do I think the current stock price is well deserved, but I also have little confidence in management's ability to turn things around. I stand by my underperform CAPScall on the stock.

Gee? That article didn't have the happy ending "feel good talk" I was looking for.... Maybe this one will?

All Things reports: Free-Falling Groupon Has Its Problems, but Bankruptcy Talk Is Bunk

As the stock continued to slide, a Reuters report suggested the collapse had to do with economic weakness in Europe, where Groupon gets about a quarter of its revenue. Sameet Sinha, an analyst at B. Riley & Co., told the wire service, “Europe is a concern, obviously.” But Mahaney was less concerned about Europe, saying that there’s not much evidence it will cause a material risk to estimates. Rather, he tweaked his price target because of lower 2013 estimates.
Additionally, the stock has not yet stabilized since last week when Eric Lefkofsky, Groupon’s executive chairman and co-founder, said he had stepped back from day-to-day work with the company so he could devote more attention to his venture capital firm, comfortable with that step given the recent additions to Groupon’s executive team.

Groupon is expected to report second-quarter results in late July or early August.

No. That didn't sound too good at the end either! You know that when the bankruptcy talks come out and are denied, then there's smoke in the room.... Maybe fire in the kitchen.... 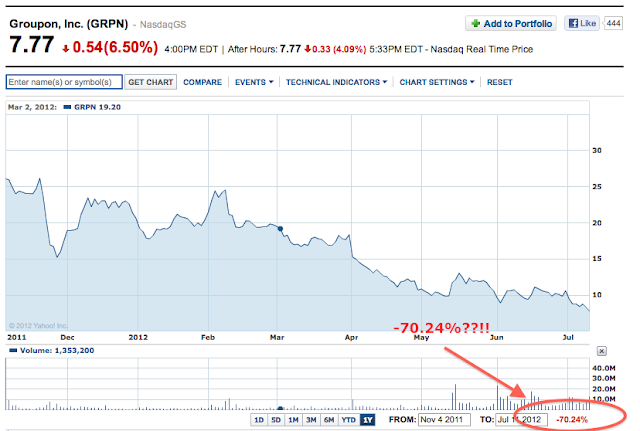 Perhaps my prediction of under $5 a share in December is too high?

Groupon has to be one of the greatest stock failures in history.... How will Facebook find a way to top that?

But, ultimately, smart old Mike, who can call stocks like Jimmy the Greek can call sports results can only chortle like a sick rooster. When I chuckle about this stuff and then look at the gold prices and see them depressed (not nearly as bad as this, though) my wife says,


NOTE: Groupon in Japan must be doing worse, actually. I haven't seen a Groupon advertisement in months. They've dropped off the map in japan and I hear nothing positive about them from women's magazine people and former users.

The one and only time I used them, I bought a $20 gift cert for $10 for a pizza chain. When I paid for the order with the coupon, the store jacked the price up so my net savings was less than $2. Not worth the hassle since $2 coupons abound.

Great article - you hit it spot on!

The sales ratio has gone down for groupon for some days.But the sales increases especially during the holiday season where people tend to get gifts.
script groupon