Are You a Conformist?


Are you a conformist? I repeat myself. Most people will say that they are not. But most people fool themselves. 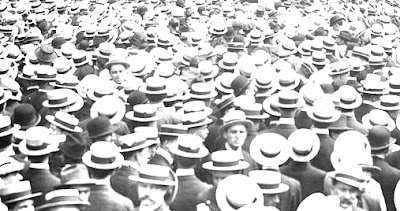 The loser? You the taxpayer.

Now they say that the race between Obamney and Robama is too close to call. I wonder how many people are going to vote just because they want to vote for the winner? You know what I mean? I mean that they don't actually care about the presidency (ask all those disillusioned Obama voters from 2008) but that they now want to vote for whomever they think will win?

I read a great article by one of my favorite writers, Fred Reed, yesterday.

From Lew Rockwell: A Surrender of Sorts by Fred Reed

It is said that democracy depends on an informed public. This is to say that democracy is impossible. In the American case, blank ignorance of anything outside the borders leaves people easily manipulable. The genius of the American political system is that it is not necessary to suppress inconvenient information, but only to keep it off television. So few people will encounter it as not to matter....

The American public believes itself to be free, to have a spirit of rugged individualism, to live in a democracy admired by the world. In fact Americans are not particularly free and becoming less so by the minute, are not individualists but herd consumers formed by a controlled press, and do not live in a democracy.

And totalitarianism comes. This is no longer the assertion of those dropped on their heads as children. Daily we read of more weaponry for the police, more surveillance authorized by courts, more unlegislated powers for Homeland Security. Currency controls fall into place to prevent people from fleeing the country with their assets.

In this direction, I think, lies the future. It is perfectly possible to store every email sent, every purchase made except by cash, every withdrawal of cash; to institute airport-style “security” for trains and buses; to monitor any conversation by telephone; automatically to track cell phones and read license plates and store it all. We are close. We are very close.

Protesting is pointless. No governmental mechanism prevents the headlong progress of things that would have sickened Thomas Jefferson. In the presidential debates neither Candidate A nor Candidate A has said, so far as I know, a word about the tightening watchfulness.

The only reasonable approach is to lie down and enjoy it. Which I shall do.

I wonder if we can?

On that note, speaking about people voting for the person that they think is going to win, instead of actually getting informed and voting with knowledge, I think there is something to be said for that.

Even Seth Godin, in a way, agrees with that notion. He wrote:

But, I think Seth's logic is dead wrong. He thinks that you should vote because,

"The magic of voting is that by opting in to the system, you magically begin to count. A lot.

If you don't like negative ads, for example, then vote for the candidate who ran even 1% fewer negative ads. Magically, within a cycle or two, the number of negative ads begins to go down."

"Magically, within a cycle or two, the number of negative ads begins to go down" he says?! Are you kidding me? Bartender! I'll have what Seth is drinking! What a load of BS! According to the LA Times, negative ads are at the highest pace in history this US  presidential race:

A study by Wesleyan University shows a staggering leap in negative advertising during the 2012 presidential campaign, coinciding with a huge growth in spending by outside groups eager to influence voters.
In a campaign that already has been noted as particularly hostile, the vitriol of the rhetoric so far has reached a seemingly unprecedented level. At this point in 2008, 9% of ads were classified as negative. So far in the current race, 70% of the ads have been negative ads.
Negative ads have been on the increase for a hundred years, Seth! Get back to the real world! It's quite obvious that Seth hasn't been paying attention these last 40 years. He also, obviously, seems ignorant of the "Electoral College" that the US presidential elections use.... Psst! Seth! Popular vote winning presidents have lost elections several times!

Come on, Seth! What a load of crock! You keep writing nonsense like this and you'll lose fans! Absurd! 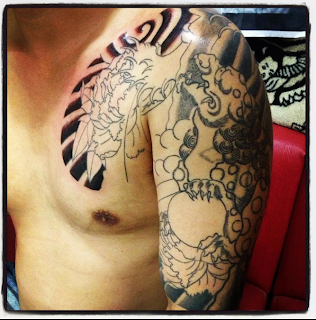 All Japanese non-conformists have tattoos... I think it's a rule or something... (photo by Toshitaka Taniguchi)

Have you ever heard of the Asch Conformity Experiments?

They were very famous psychology experiments that were held in the 1950s that showed that people would actually state what they thought was wrong just so that they could fit into the group.

The Asch conformity experiments were a series of laboratory studies published in the 1950s that demonstrated a surprising degree of conformity to a majority opinion. These are also known as the Asch Paradigm.

Watch this and see how powerful "group think" is to the human mind:

When one is to consider how powerful this urge is to be accepted, along with how much TV is viewed by the average American and how little they read books, it paints a dark picture indeed.

Vote Obama the despot! Or Romney the savior! Whatever. History shows us that, no matter who wins, the wars will continue and the bankers will be bailed out - you, the average citizen will pay the bill. Now, perhaps you don't know exactly who will win the US election, but at least you know who is going to lose.

Watch this too on Informational Conformity vs. Normative Conformity:

Mike, I too like Fred Reeds pen.
I am approaching 60 and my wife always says "dont worry, in 20yrs it will all be over with". I should be so lucky. Men in my family dont live too long. People like Fred Reed and Albert Nock know that "the world is fundamentally unchanging." And have mastered the sit back and watch.