There's something weird going on at Facebook... Well, who doesn't know that? But recently I've noticed something really strange.

You know that if you send out "Friend" requests to people you don't know, Facebook will lock your account, or even delete it. Before, I've had my account locked so that I couldn't add "friends" even though I hadn't been sending out requests.

But now? Something is really fishy!

In the last several weeks, I've been shown "offers" from Facebook to "friend" people I don't know, have no mutual friends with, nor can I even read their names! Lots of these "People You May Know" photos show pretty girls and they often show impressive cleavage and are in very seductive poses...

I'm wondering if this is some sort of trick? Is Facebook trying to get me to "Add Friend" to these people so that they can shut down my account? Or is the CIA trying to trick me into some sort of international money-laundering sting? Is this some sort of trap for a prostitution ring? Or, is it more likely, just some smart Russian Pimp using Facebook to get his girls customers? Are these photos of these girls even those real women?

Anyway, I've been wanting to screen capture these for a while but keep forgetting... But I did last night. Here, look for yourself: 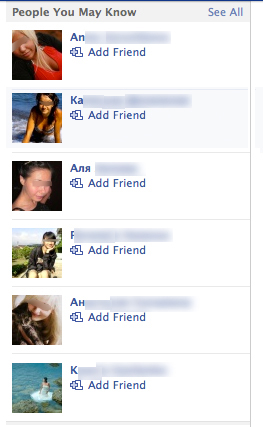 I'm sure they are all very nice girls. We've got seductive poses and even the "girl next door!" Oh! And there's even other nice girls who look like the "marrying type." I've blocked out their names because, well, maybe this is just a coincidence that this looks like a dating or mating or prostitution ad... But, then again, NO! I wasn't born yesterday! (I intentionally blurred out the name and these ladies eyes - Mike)

I am not insinuating at all that any of these women are prostitutes. That is not my intention at all. What I'd like to point out is how Facebook is presenting them. Why in the world is Facebook showing me a menu of people with the words, "People You Might Know" written above them when it is obvious we have no mutual friends and many of them don't even use the English language?

What sort of kooky algorithm is that? It's not me that is saying these women are prostitutes, all I'm saying is that they should be pretty pissed off at Facebook as to how they are presented to complete strangers.

I also have nothing against Russian women. In fact, I think Russian women are quite beautiful! But I also know that there is a worldwide Russian prostitution ring running and it isn't a well-kept secret (gee, I guess if you are running a prostitution ring, then you wouldn't want it to be so secret that even customers can't find you!) And, probably most westerners don't know this, but, Russian prostitutes are very popular in Japan... You can see them everywhere in Tokyo on any night of the week and my friend, Kevin, who lives in Osaka tells me it's the same thing there.

Could the FB algorithm be set up to show these to men in Japan?

Could this be another use of Facebook that we're going to see much much more of in the future? Maybe. If Facebook started being used for dating and prostitution, then maybe they would have finally found a profit model that works!

* Note: Come to think of it, since I rail on Facebook so much as in Facebook Shares Plunge After Lock-Up Expires, maybe FB is looking for an excuse to cut off my account!!!...
at November 05, 2012

Mike, I'm not getting any friend recommendations like these, so far.

A girl in Hawaii told me that she's getting lots of them recently... What gives?