I recently posted a few articles about that examine, from a more practical viewpoint (meaning mine) how government deficit spending and high taxes are destroying the economy (add that to a rapidly aging society which is a problem in the United States but especially in Japan)... It seems obvious to me that anyone with a basic understanding of economics could follow the train of thought. 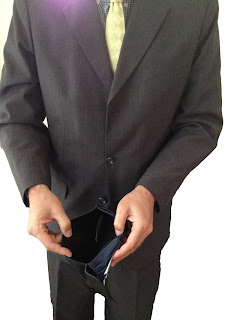 Me and my wallet

Nevertheless, it seems that far too many people do not. The first post of the topic was entitled Japan is Collapsing. I was writing about how the economy has fallen over these last few years and put the blame squarely on the shoulders of the Japanese government spending us into debt at 237% of GDP. I also pointed out that Japan now has over 15.7% of the population under the poverty line. I even backed up my article with commentary by Mish Shedlock.

Even with those facts, some claim that the fault lies with rich people or private industry. The last letter on that post I received, said this:

(No. I said my kid goes to that school and the company pays.... Just like everyone else - it's a corporate tax break! - Mike)

If now, in a moment of economic downturn, those schools don't lower prices it must mean they have enough rich people to pay for it. Too bad you can no longer afford it. Too bad that woman won't sell a couple of BMW and perhaps start working to be able to afford the education she wants for her kids. But guess what, if you can't make enough money you can't get in.

If you want to live in a world where all services are private so taxes are low, where only money can get you into the really good stuff, you need to be prepared to not being able to afford the best. It's what you signed up for.

This commentator doesn't come out and say it directly but he also blames the rich. Let's examine his last paragraph once again:

"If you want to live in a world where all services are private so taxes are low, where only money can get you into the really good stuff, you need to be prepared to not being able to afford the best. It's what you signed up for."

I wonder what world this person is speaking about? I'd like to live in a world where taxes are low so I could pay for services. That certainly isn't Japan, I'll tell you that! In Japan corporate taxes are 46%. After that, when I pay my employees, there's another 20% taken off the top of that. I'd consider that outrageously high.

I'll trade back that more than 68% of the money taken from me in taxes and pay for my child's school ten times over.

It's obvious this person thinks government provided services are "good" (kind of reminds me of the British guy who told me NHS (National Health Services) in the UK were great because they were "free!" I asked him how they could be "free" if they are paid for through taxes?)

As I said, his hidden meaning is that government spending is good. This person needs to read the classic "Economics in One Lesson" by Henry Hazlitt to see just how far off base he really is. Yes, my friend, I want to live in a world where taxes are low... Give a guy a break and tell me where that place exists!

Laughingly, he writes, "It's what you signed up for." No. It's not what anyone signed up for. I'll drop the government spending to zero and see my disposable income increase ten-fold and spend it on the real economy; not paying off government debt or having the government hire their crony friends for building bridges to nowhere.

Sorry. Your defense of socialism and government out-of control spending is illogical and ignorant of the situation here in Japan. See? This guy defends the government and socialism... Another under-handed attack on the so-called "rich."

I examined the hatred of the rich in more detail in yesterday's blog post as it has been a subject that I've thought about for a long time and it really has come to the fore over these last 2 years or so (it seems to me). Class warfare is alive and well in the USA.

Michael C commented oo: "The United States and the West Are in Big Trouble....":

I think most of the rich hate in the U.S. stems from the fact they don't pay the same tax rate the rest of us do. It's BS that Romney only pays a 12% tax rate. You can argue it's due to his 'charitable contributions' but he can donate to a non-profit Super Pac to get tax deductions, that spends the donated money supporting Romney, it's a pretty screwed up system.

Also, the fastest growing Rich in the U.S. isn't job creators it's the financial industry. A hedge fund doesn't make it's money from creating jobs, it makes it's money from shuffling around investments.

Entrepreneurs are the ones that create jobs, but the likelihood of getting incredibly rich as an entrepreneur is minuscule to the financial markets.

Almost everything here doesn't really bother me but Michael C seems to make a mistake that is common. Michael, my friend, may I ask you why you think that,

The real problems are many but just let me name a few:

1) The Federal Reserve devaluing your money 97% in the last 100 years.
2) US military empire and bases in over 160 countries.
3) Financing foreign wars by borrowing trillions and trillions of dollars from the Japanese and Chinese.
4) Extremely loose monetary policy and low interest rates.
5) US Total Unfunded Liabilities at 99 Trillion Dollars
6) Total US debt as of the writing of this blog: $16,160,432,335,905.30
7) Taking tax monies and bailing out insolvent banks and foreign corporations on the back of the American public.

There's a whole litany of problems for the US economy... Whether or not people like Romney pay 14% or 40% ~ 50% (like everyone else) on $250 million dollars ain't gonna make a drops worth of difference in the Pacific Ocean.

This one argument has been common and, I think it points to, and makes a strong case for me, that the Hate of the Rich is growing. The "Hate the Rich"  trend is useful for the government as it deflects attention away from government mishandling of the economy. It's also good for the mass media (populism builds ratings and sells advertising).


Finally, I do want to share with you a comment that I basically have no qualms with at all. Anonymous commented on "The United States and the West Are in Big Trouble....":

I think these last blog entrys are really on perception and need to be put into perspective. The United States citizen hates the decline of the middle class, loss of spending power, high unemployment, and the ultra-high concentration of wealth in the hands of a few.

Do politicans exploit this angst and muddy the waters for their own gain, you betcha. Mike Rogers decrys cronyism, and I believe is part of the solution. The United States is not the same country it was when M. Rogers left it.

I proudly voted for Ron Paul. The press decried Ron Paul's idea that the Federal Emergency Management Agency should not bail out rich people who could easily buy private insurance for their expensive beach front properties.

The upper echelons of the Democrats are fabulously wealthy. The finanical collapse of 2008 was really eye opening for this generation. The banker bailouts proved it was Socialism for the rich, and free market for the rest. One only has to look at the last four president's cabinet members. Its made up of bankers galore. The same type of bankers that are hurting Japan with allowing so much debt.

Harvard educated Americans become lawyers (mainly corporate) or bankers. People in the mid to late 2000's really thought if they could get a 2nd house they could be famously wealthy.The free market proved otherwise and the government got the tax payer to bail them out.

Both Obama and Bush 44 voted for the bail out.

Yep! Exactly! Thanks to everyone for reading and commenting.
at November 27, 2012

Your Anonymous poster added too many words to a sentence, I fixed it for 'em:

"If you want to live in a world where all services are private so taxes are low, where only money can get you into the really good stuff, you need to be prepared to ...to afford the best. It's what you signed up for."

It would be like with computers:every year they'd get better and better, and less expensive too.

I second this: "I'd like to live in a world where taxes are low so I could pay for services."
An ok-ish compromise to zero taxes?
Maybe voluntary taxes someday?
Imagine politicians having to actually ask for the money they get to spend, and show receipts! ... If only.

Look on the bright side, you're not related.

Michael wrote, "...hate in the U.S. stems from the fact they (the rich) don't pay the same tax rate the rest of us do."

Wowzer, I never heard anyone say that around me.
I always thought it was more superficial envy or something,...but hate?

Whatever "it" is, it's not from the tax rate. Imho.

MJB: "the Hate of the Rich is growing"

Maybe, but where's it growing from?
I doubt it's "from" poor People, more likely some bast... stoking fires for personal gain or for empire. Or do I repeat myself?

"The United States is not the same country it was when M. Rogers left it."

Really? Seems about the same to me, only it's more obvious.

I hope that was a civil comment and it made sense.

I don't always agree with what you write and sometimes think you fly off the handle. But I must admit that these last few articles have totally and completely destroyed your detractors... Especially Dave.
Craig Rozar
Yorba Linda, Calif.