Why You Can Never Give Up! Why You Have to Keep Trying!


Since 2006, I've started up several projects. Some have made a lot of money, some lost a lot of money. Actually, all in all, it's been a string of failures and near misses for six years in a row.

There have been some, though, that were just on the verge of huge success but something out of the blue happened and ruined the plans. 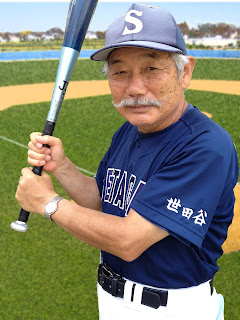 It doesn't matter how old you are! Keep your dreams!

One time, I helped a new China based airlines increase its Japan traffic by well over 300% in less than a year. I had them all over the TV and in many major publications. They were hot. Then, one day, I wake up and see the news that the Chinese government revoked the airlines' license because this up-start was seriously eating into the profits of the state-run airline. I was the first time in aviation history that an airlines had their license revoked. More than 4,000 Japanese were stranded. It was a major news story here and I had to spend the rest of the next six months running around and apologizing the upper management at all the big networks....

Another time I helped a company that had lost $140 million dollars over the last decade turn a profit in less than 2 years. I thought for sure there would be a pot of gold at the end of the rainbow for me that time. Not so, the president had to retire and a new president came in and he wanted to run that company like his own little fiefdom and give jobs to his crony friends. I resigned and that company started losing a million dollars (more) a year again.

Another time I helped a company raise $4.5 million dollars from Intel only to have our company president steal more than half that money and run away to Hong Kong. That was another big story and scandal in Japan.

The names have changed and the people are different but I've basically had this sort of story repeated over and over in these last seven years.

That can get quite depressing. But it's OK. Did you know that Colonel Sanders failed 99 times before he finally hit it right and became rich at 63-years-old? I just turned 55 and can count (what I consider) to be six failures in a row... If I use the colonel as a yard-stick, I've got 93 more to go before I become a millionaire? Yikes!

I have gotten lucky (again) and it was because I kept trying.  Just this year I propped up another brand new company with great goals and dreams only to be stopped by Japan's archaic system. Before I ran into a brick wall, I was out selling and looking for investors. I met a guy who is very famous and has a golden reputation for starting new companies and making them hugely successful. While I tried to talk him into investing, he declined. Nevertheless, six months later, I was contacted by him. It seems he was impressed with my salesmanship and aggressiveness; he had heard that my new project had run into a car crash so he asked me to come work for his new company.

It's a wonderful new company too with a fantastic idea and product. I accepted the job eagerly.

There is a moral to this story too. You can never give up; you must keep trying.

I had made up my mind seven years ago that I was going to keep at it. I was going to make a million dollars. Of course I haven't done it yet but I have to keep trying and stick to it. You too. You can never give up.

And that's the lesson here: If I had sat at home waiting for the phone to ring or something to happen, it wouldn't. I had to go out and make something happen.

For this holiday season I want you all to have a very safe and healthy end of 2012. Things might look rough for some of us, but remember, we must always keep on trying. We can never give up.

Keep at it and keep knocking on the door and someday it will open and a bright new day will come shining in for you and your family.

Winning at Raffles, Bingo and Life are Exactly the Same! Here's 5 Simple Tips on How to Win at All of Them! (http://modernmarketingjapan.blogspot.jp/2012/02/winning-at-bingo-and-winning-at-life.html)

Make Your Own Success (http://modernmarketingjapan.blogspot.jp/2011/07/make-your-own-success.html)

Email ThisBlogThis!Share to TwitterShare to FacebookShare to Pinterest
Labels: dedication to success, keep on trying, millionaire, Never give up, pocket notebook, secrets, success

MIJ wrote: "If the company didn't pay, he'd go to public school and get a crap education."

Why wouldn't you homeschool?

I doubt your answer would be "socialization" like the three bumps on a log parroted to me in unison this Thanksgiving.

That IS something worth keeping in mind, thanks.

Dee Snider singing in the background: Stay positive,... stay hungry(?) Through the fire...

Crap, I've been too pessimistic lately. It's so un-me. Heh, I may be broken?

name calling. That's a funny phrase if there ever was one.

STFU is definitely Not name calling.
STFU can mean many many things.
In this case, I think it meant, "dude, stop making yourself look worse, it's embarrassing for you." That could be seen as kind-of friendly advise to a jerk, no?

Also, if someone is a Keynesian, they are by definition, a dolt.
It's a fact.

I dunno, it's way past my bedtime and I only have one eye open but that's how I SEE IT.

Well, something tells me I posted on the wrong thread.

I meant to post that on the "Japan is Collapsing" thread, but stuff happens.

Let that be a lesson to others, be the best that you can, otherwise your efforts wind up tossed into the wind and scattered as if they were meaningless.

Yes, you did post on the wrong thread. But that's...ok. Hey, yeah, I know plenty of people that home school their kids and the kids are usually quite smart. Part of that is because the parents (the teachers) are too. But one set of parents were not great at math. Not bad, but no good enough. And their stories about other home schooled kinds who went of to college full of confidence only to be told they'd have to take remedial math courses. And there are the socialization issues too. But if they participate in clubs and local organizations, they seem fine.

And I am the one that used the phrase name calling. I think I did because I thought , and I could be wrong, that Mike had also used that term in an earlier post of his blog or facebook. And yes, STFU is not name calling but it an insult to a guy who was not being insulting to Mike. IMHO.

Finally, now dolt, that's a funny term if there ever was one.